The GOP Can't Think of Women

On the currency, or elsewhere. 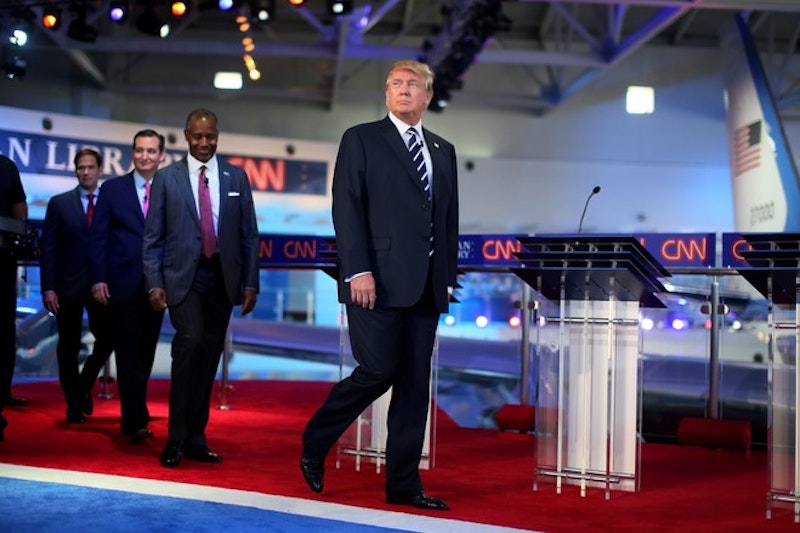 Mike Huckabee would put his wife on the $20 bill if elected. From this, we know that Huckabee is a fool and crass bounder. Also, we know that, in a debate setting, when asked to list one (1) significant American woman in history, he can't do it. (See, "fool" and "bounder" above.)

This has been the conclusion of the pundits, anyway. But perhaps they're being too harsh on Huckabee—and too harsh on the rest of the Republican field, which also flailed embarrassingly while trying to answer this question. Ben Carson kept with the blood relations theme and picked his mother; Donald Trump picked his daughter, or maybe Rosa Parks (so much for Trump's vaunted decisiveness.) Jeb Bush picked Margaret Thatcher—who isn't American. John Kasich picked Mother Teresa, who isn't American either. Some of the others managed to pass the difficult hurdle: Walker, Paul, Rubio, Cruz, and Christie all selected people who were famous and American both (Fiorina refused to play.) But still, that's five of 11 candidates who couldn't name a single historical woman from the United States to go on the currency.

That seems like more than just individual idiocy. Almost half the Republican candidates freeze up when they have to name a famous American woman. Granted, they may all be stupid, but come on. They can't all be that stupid. Bush, Kasich, and Huckabee were all governors; they all have at least minimal political skills. And yet, they're picking Margaret Thatcher and Mother Teresa. Why is this innocuous question such a problem for them?

The answer is identity politics. The Republican Party is a party built around pandering to white men. The GOP gets clobbered among virtually every ethnic group (African Americans, Hispanics, Asians) except for whites. The GOP also loses by 52-36 percent among women voters. When Republicans win elections (as they did in 2014), they generally do it by getting huge heaping clumps of white male voters (64% in 2014.)

This isn't just about demographics though—or, the demographics aren't just about numbers. As part of white male identity politics, the GOP is committed to a platform that rejects the idea that marginalized groups face discrimination or hardship. The GOP, for the most part, sets itself against the idea that black people are treated unjustly by the criminal justice system. It sets itself against feminism, too, opposing calls for workplace equality and even access to birth control.

The problem for the candidates is that to a large extent important women historically have been in favor of rights for women, variously defined. Women have also been involved in other Civil Rights struggles as well. As a result many of the best-known women in American history are closely associated with causes that are still relevant and which are, moreover, causes uncongenial to GOP candidates. No GOP presidential hopeful is going to move to put Betty Friedan or Gloria Steinem on paper currency. Other figures, like Sojourner Truth, Ida Wells or Helen Keller, are also uncomfortably tainted with a social justice protest ethos that sits uncomfortably with GOP priorities. For example, Rubio and Trump both chose Rosa Parks, which seems like a safe choice; Parks is a famous American, and universally admired. Unfortunately for the GOP, though, Parks was on the board of Planned Parenthood. An actual Republican administration would quite possibly face opposition from the pro-life base if they tried to put her on a bill.

These problems can be worked around; Rand Paul cannily picked Susan B. Anthony, who is touted by the right (somewhat shakily, but nevertheless) as a pro-life supporter. But the point remains that the GOP has structured itself in no small part around the idea that diversity is unnecessary, and that inequality is a shibboleth. It therefore becomes difficult, in the heat of the moment, to select a diverse hero famous for fighting against inequality who won't rub all your white male supporters the wrong way.

CNN was asking the Republican candidates to pander to a particular constituency. It should’ve been simple. But the GOP is set up to pander only to white guys.