Now We Know About Trump, Jeb and the Casinos

All it took was a presidential debate. 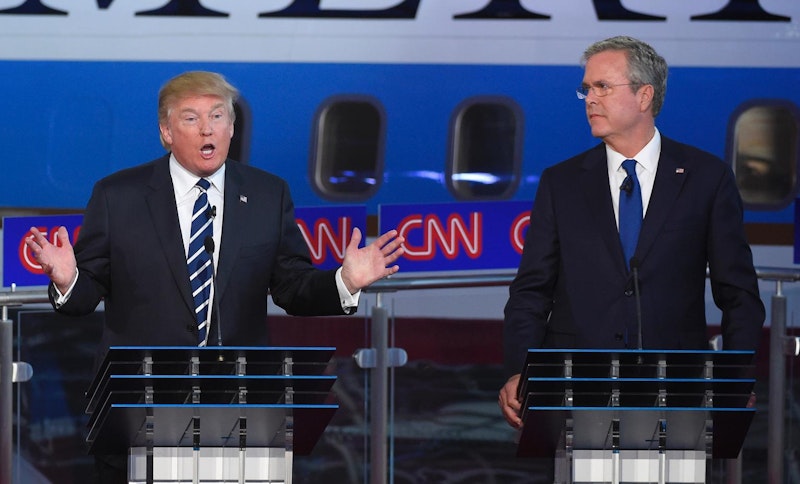 “I didn’t—” said Donald Trump. “Yes, you did,” said Jeb Bush. “Totally false,” said Trump. Jeb fired back. “You wanted it,” said the husky ex-governor, “and you didn’t get it because I was opposed to—” “I would have gotten it,” Trump said.

What, what? All right, enough coyness. “He wanted casino gambling in Florida—” Jeb had blurted, and that caused Trump to sail in and begin their back and forth. On stage at the Reagan Library, Jeb wanted it known that Donald Trump could not buy him. Trump, standing next to Jeb, wanted it known that he had never tried. As so often, Trump was lying straight out. As sometimes happens, Jeb was telling the truth.

First, Trump certainly does want casino gambling in Florida, and he has failed to get a piece of that particular action. “If Miami doesn't do casinos, that would be a terrible mistake,” he said two years ago, a little after he bought a hotel-resort in the Miami area. But Trump still doesn't have a casino in or near Miami or anyplace else in Florida. He's wanted one for quite a while. In 1998, the year Jeb was elected, the St. Petersburg Times reported, “Trump has teamed up with the Seminole Tribe of Florida. The two have hired the same high-powered lobbyist to bring full-scale casino gambling to the state.”

The tribe was looking to Trump to manage its casino operations. But first the state had to give the tribe permission to have such operations. The state decided not to. When Jeb came in as governor, nothing changed. Trump had held a $500-a-head fundraiser for Jeb and he had given Florida's GOP $50,000. No good. Politico says that Trump pulled out of his talks with the Seminoles after candidate Jeb's attitude became clear, but that he was dallying with the tribe again in 1999. Still, Trump never made headway with the Jeb administration or with the state's lawmakers.

Trump's effort showed up in court filings. His point man in the '98 talks had a falling out with Trump, and one result was an affidavit submitted by a lobbyist who had worked for them on the project. In the words of Bloomberg Business, the lobbyist testified that he had told the two men “in late 1998 that Florida officials wouldn't budge,” and that “Trump replied, 'That's the end of it.'” The point man's version was much the same. Again as conveyed by Bloomberg Business: “Trump was only interested in building 'Class III' casinos, offering pure games of chance, such as slot machines, craps, and roulette. When Florida Governor Jeb Bush nixed the idea, 'Trump directed that the effort be terminated entirely,' Fields's filings say.” Fields is Richard T. Fields, the point man. (Among other misdeeds, he helped give Pat Benatar a career.)

Now Trump says none of that happened. At least he said it at the debate last week. A member of the well-heeled audience found the claim a bit hard to take. “It was uncomfortable,” the man said drily. “No doubt.” The man is Donald Trump's chief lobbyist in Florida. At least his client gave him a vote of confidence. “I promise if I wanted it,” Trump said on stage, “I would have gotten it... I know my people... I know my people.”

And they know him. Asked for comment about the casino matter, Trump's spokeswoman emailed to a reporter: “Mr. Trump never asked Jeb Bush personally to approve casino gambling.” Oh, very careful there, but not careful enough. Trump was claiming that no one in his organization lobbied Jeb for gambling (“I know my people”). What a liar!

Thought. What makes a gaffe? Trump was caught lying on national TV, and about a matter that has something to do with public affairs. Not only that, but he was obnoxious about it. “Don’t make things up,” he said. “Jeb, don’t make things up. Come on.” But the press noted his falsehood and then let the matter slide. I suppose gaffe coverage isn't about revealing a candidate to the public. It's about embarrassing the candidate and then watching him squirm. Somebody who can't be embarrassed is going to remain un-gaffed.

Hey, Washington Post. The matter of the casinos first caught my attention because The Washington Post published a lengthy story on how Jeb and Trump have gotten along over the years. The story mentioned that Trump helped Jeb in hopes of getting himself up and running as a casino operator in Florida. It also said that Trump, in recent years, had gone about bad-mouthing Jeb. So had Trump failed to get his casino go-ahead? It turns out that the answer is yes. “Turns out” is the key phrase, because the Post article never told us. If Trump really dislikes Jeb as much as he seems to, the letdown over casinos would be the most obvious explanation. But out of its 1965 words, the article could spare exactly none to let us know what had happened. Jeb had to bring up the matter in a presidential debate; then the press filled in the story.

It's not like the facts were too explosive for the mainstream media. After all, a fat cat tried to get a politician in his pocket, and the politician said no—nothing dangerous there. It's just that the typical newspaper handles facts like a chimpanzee handles lice. It can find them, but what it does afterward can be kind of disgusting.