The libertarians must again prep to flee, says Todd Seavey. 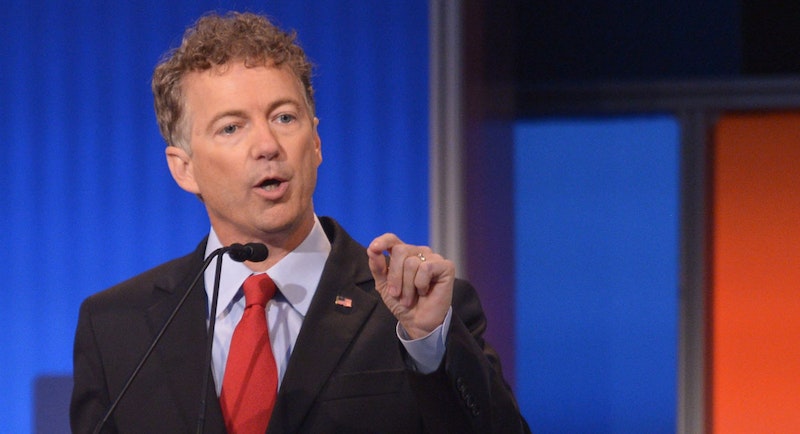 If there’s no big bump for Rand Paul in the next few Republican debates, libertarians must consider their other options. The Libertarian Party might make more sense in 2016 than in any prior election. I can hear you saying that’s not a high hurdle, but bear with me.

As for the anti-voting anarchist position, it’s one for which I have growing sympathy, and I would never insist anyone must vote, but I think a populace voting “defensively” has to be seen as morally acceptable. If people genuinely vote in an effort to decrease the statism to which they’ll be subjected, they may well fail, but to chastise them for trying strikes me as blaming the victims.

But if the only big question within the Republican Party should remain “Trump or Carson or Bush?” and the only big question within the Democratic Party is “Clinton or Sanders or Biden?” it’s reasonable to jump ship and see what the Libertarians are offering. It just so happens that in all likelihood (pending the May 2016 Libertarian Party nominating convention), instead of running some yahoo, they will again pick the popular and successful former two-term governor of New Mexico, Gary Johnson, who is arguably just plain better qualified than any of the politicians mentioned earlier in this paragraph, with or without his immense ideological advantages (such as loving both capitalism and marijuana).

And so I vow that in 2016, as it was in 2012, my operating slogan will be “Johnson if not Paul,” meaning the Republicans either do the right thing and nominate a libertarian (or quasi-libertarian), or I go to where I know for sure I can find one. I certainly don’t want to remain in the Republican fold if, as usual, they eventually overcome their disgust and turn into cheerleaders for Trump if he’s the nominee.

Now, if Trump’s the nominee and the conservative establishment refuses to turn into cheerleaders, great (cheerleading is embarrassing as a general rule—witness some of those “Rumsfeld as hunky pinup”-type covers on National Review a decade ago, for instance). Not cheering could be very educational. The establishment would then have my respect, and Gary Johnson would have my vote. He ought then to have theirs as well.