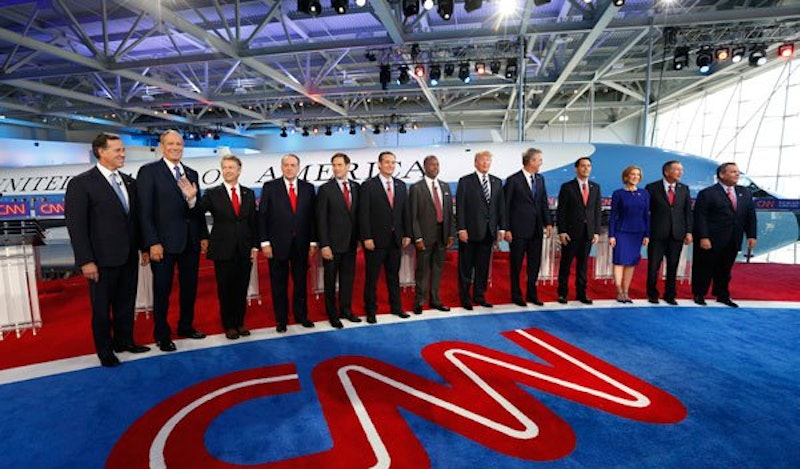 Before the second debate, I wrote, “Some of the candidates will fight back. Carly Fiorina will do well, even though Trump will give her a mouth-spray about her mishaps at Hewlett-Packard. The men will have it still tougher.” Pretty good. I mean, I got the basic dynamic. Jeb did try to confront the big bully, and Fiorina not only confronted Trump but got somewhere while doing it. The morning-after press on the debate was that Fiorina scored big and that Jeb bobbled. One journalist pointed out that, after Trump refused to apologize for mouthing off about Jeb's wife, Jeb simply shrugged. Meanwhile, Fiorina nailed Trump with the most cogent line of the evening: “I think women all over this country heard very clearly what Mr. Trump said.” She was referring to his snotty remarks about her face, and to his subsequent prevarications about what he meant, so this cogent line was about a silly topic. But we take what we can get.

I should note that the phrase “mouth-spray” was a very bad choice on my part. It suggests that Trump would take an atomizer marked “Hewlett-Packard mishaps” and try to aim it down Fiorina's gullet. I meant that Trump would spray Fiorina with words, and those words would come from his mouth. Fine, except “mouth-spray” doesn't mean that.

Here's a good call. I suggested that Trump was slowly rethinking his decision to say mean things about Ben Carson: “Possibly he senses that it's best to disengage and is struggling toward that goal.” I submit the Wednesday debate as evidence. When Carson tweaked the big guy about calling him an “okay doctor” (from the little I know about Carson, I gather this is like saying that Mt. Everest, as mountains go, is sturdily built and far from petite), Trump was cloddishly eager to play the good sport and chum up to his former target. Of course, Trump was being chummy with all his punching bags except curly-haired Rand Paul. But that doesn't mean I was wrong, and I'll add that I called it when I said that Carson has the drop when dealing with Trump. Remember, Trump couldn't get him to high five; Carson let the chump's hand wait there in space. I suspect that Carson is to ego what Ron Jeremy is to hard-ons. The other men think they have something to prove around Trump. To Carson, Trump and all the others are just more of the static that floats between him and his mission.

One prediction was only kind of borne out: “Jeb is going to cry on camera, or somebody, some candidate-stiff with a red tie, is going to have a wobble in his voice right when he shouldn't. Trump, over at his podium, is going to glance the poor sap's way and lift the corner of his lip.” I mean, okay, none of that happened. But Jeb did prove a flop at manning up and everybody noticed. Reality did try to match my vision. It could’ve tried a bit harder, but what else is new.

“Per sauna.” Trump deserves credit for the debate's second-most cogent line: “We’ve had a graduated tax system for many years, so it’s not a socialistic thing.” Pedestrian phrasing and a familiar point, but remedial instruction was needed on stage, and in this case Trump supplied it.

To stray from the debate, Trump's doubletalk about his Fiorina remark was admirable in its way. Trump protested to reporters that he was talking about Fiorina's “per sauna.” I think he meant the price that she allegedly charges (nothing has been proved) to tell sweating, towel-clad people what she's going to do about Putin.