No, They Didn't Try to Censor Condoleezza Rice 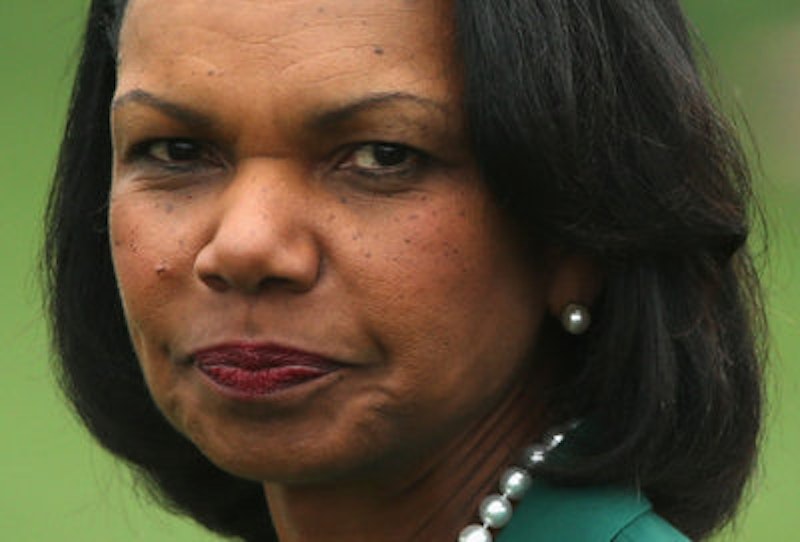 A zombie lie has shuffled its way into respectable discourse. The blogger Kevin Drum provides the latest example of the thing's dread vitality. Reflecting on the nonsense that college kids have been spouting about trigger warnings and microaggressions, he moves in for his big finish: “And if Condi Rice gets invited to your campus to speak, mount a protest. But let her speak. If you can't tolerate even the thought of listening to someone with whom you profoundly disagree—or of anyone else listening—then you need to examine your own principles pretty hard.” A while back Jonathan Chait brought up the Rice affair when laying into campus PC and “the protesting of even mildly controversial speakers on college campuses.” But Drum and Chait are both wrong.

Last year Rutgers University invited Rice to deliver its commencement address and receive an honorary law degree. She backed out because of the fuss raised by some of the school's students and professors. They objected to the lies she had told and the policies she had supported while serving as George W. Bush's national security adviser and then his secretary of state. Some of these ill-natured people even called her a war criminal. But they said nothing about her views and what she might tell her audience. Their argument was simply that delivering a commencement address at Rutgers is an honor and that Rice did not deserve honor. They didn't mind what she was going to say, they minded what she had done.

An editorial in the student paper put the matter this way: “Rice probably has a lot of advice on perseverance, dedication and hard work that she can offer to this year’s graduating class, but what she chose to do with those qualities is certainly questionable to us.” Now here's a leader of the student movement against Rice: “We felt that war criminals shouldn’t be honored by our university. Someone who has such a tainted record as a public servant in this country should not go to our university, speak for 15 minutes, get an honorary law degree for trying to circumvent the law, and receive $35,000.” And a leader of the faculty movement: “The problem that the faculty have is not that she might speak, in fact I’d be delighted to hear her speak. If you honor someone with an honorary degree, then you’re saying this is a person who has done a lot of honorable things, and I think her record in ginning up the case for invading Iraq and in supporting waterboarding disqualifies her for an honorary degree.”

Finally, we have the faculty petition that started the flap: “The decision of the Board of Governors to award an honorary Law degree to someone who deceived her country and condoned an attempt to legalize torture dishonors both Rutgers and the law.”

There's a lot more like that in the petition, and none of it mentions intolerable points of view or marginalizing discourse or even triggers. None of the Rice opponents brought up these things, so far as I can tell from Google. Yet people kept acting as if they had. From a public letter by Rutgers' president: “We cannot protect free speech or academic freedom by denying others the right to an opposing view, or by excluding those with whom we may disagree.”

Before the war, you could talk about faults in the evidence for WMDs and get back a lecture on pacifism (word on the street: pacifism does not work). Now you can say that one of the people who started that war should not be honored for her public life, and what you get back is a lecture on free expression. I think free expression is doing okay, but listening is in a lot of trouble.