Ahmed Mohamed Is No Longer a Victim

Teen quickly becomes the toast of the nation. 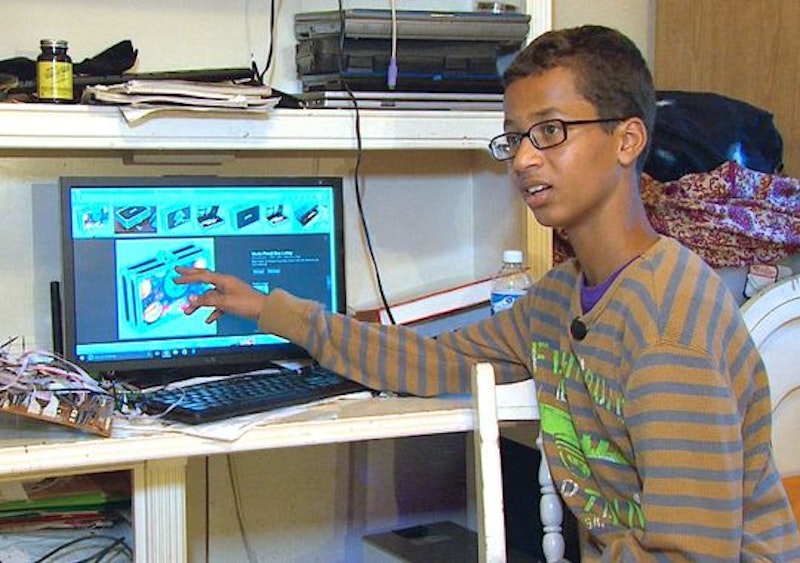 The story of Ahmed Mohamed, the precocious 14-year-old who brought a digital clock that he had made on his own to his Irving, Texas high school, is how things escalate in 2015, after years of school violence have left teachers and administrators jumpy and paranoid. The English teacher certainly had no choice but to report it, as she had no way by herself to rule out the possibility of it being a bomb. It had wires, a circuit board, and a digital display. She did her job.

This is the age we live in. If you bring certain items to school, you become a suspect, regardless of your intent. If they tick, they'll probably draw extra suspicion. And that goes for any student, regardless of race or religion. Anyone who reads the newspaper knows this. Alia Salem of the Council on American-Islamic Relations (CAIR) does not agree. "I think this wouldn't even be a question if his name wasn't Ahmed Mohamed. He is an excited kid who is very bright and wants to share it with his teachers," she commented after the incident.

Keep in mind that it’s her job to react this way, and that she started off her statement with "I think." That means she has no actual evidence to support her claim. I think it would’ve been an issue no matter who the student happened to be, given the tense atmosphere in today's schools. Kids of all races are being handcuffed in schools in the year 2015. Anyone who reads the news knows this.

What people like Salem don't get is that Ahmed doesn't need them. He's innocent and he's got social media on his side. Hell, he's got the whole nation on his side. Ahmed started winning the battle with his school and the cops the moment the photo of him handcuffed started going viral. Americans don't like seeing such things. Twitter exploded in rage and it didn't take long for President Obama to invite him to the White House. Twitter settled down after that, but the word got around and Ahmed also got offers to visit NASA, MIT (where he wants to go to college) and Facebook, among others. He's well on his way to becoming the darling of Silicon Valley at this point, and I predict he'll get more invites than he can handle.

Ahmed is now in the unique position of being a teenager who’s in a powerful position to make a strong social statement on a major societal issue. If he chooses to, he could stoke the narrative already pushed by the Alia Salems: that he’s a victim of racial profiling and that all this happened to him because of his skin color and religion. None of the people making such charges ever refer to how school zero-tolerance policies might be the main driver of this unfortunate incident, because this interferes with their preferred message. Advocates don't play the game that way.

Ahmed can—and should—make the choice of not playing the victim because he’s in no way a victim any more. He's a superstar. If he weighs the indignity of being cuffed, detained and suspended from school with the upside, it's not even close. The nation doesn't need to be dragged through another race-related national drama, especially when there was a happy ending. This will upset those who make a living finding prejudice and bigotry around every corner, but so be it.

Ahmed's parents came from Sudan. If they’d stayed there, Ahmed wouldn’t be preparing for a fête at the White House or hearing about MIT wanting him to enroll there some day. That’s presumably why they came to this country—so that their family could have a better life. And that’s what’s happening. If they’re able to put their outrage aside, I think that "a better life" is looking like an understatement now.

The President and billionaires want their son now, and that wouldn’t be happening in Sudan. What happened in the school doesn’t have to define their experience here. They can say "no thanks" to Salem and all the others who will come calling.