What We're Dealing With

The forums at and emails from Tea Party Nation betray the group's fundamentally twisted nature. 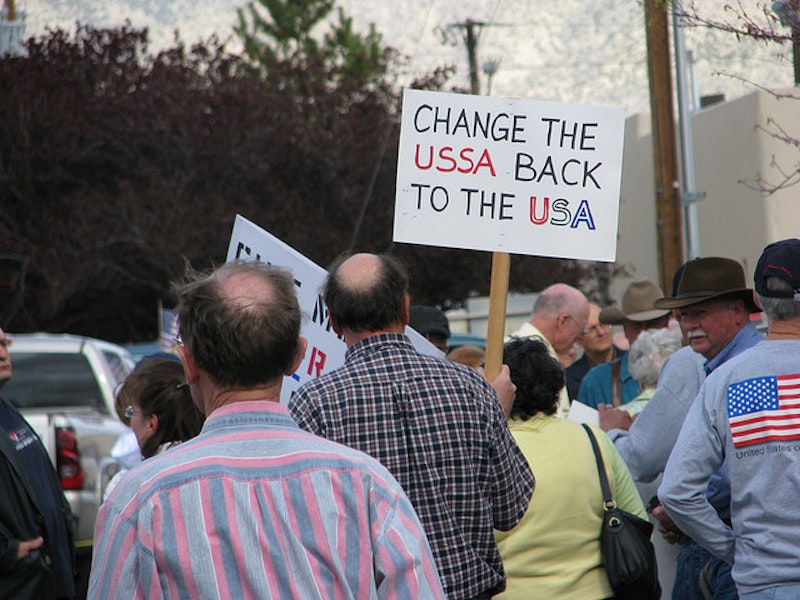 Try accessing the forum page on teapartynation.com. Unless you’re a member you can’t see what they are saying. Instead, only the front page is available. It identifies Tea Party Nation as a “home for conservatives” who desire “our god given freedoms” and all the usual values which they insist outsiders associate them with: “limited government,” “family values” and “the second Amendment.”

Glaringly absent is the virulent rhetoric we all know they use among themselves but feign anger when critics call attention to it. There is almost no name-calling, and the tone is that of empowerment rather than demonization.

I decided to sign up. I now have access to their forum page and receive emails every day. I wanted to know if their culture is as vicious and disgusting as I thought. It’s much, much worse.

It then describes Sen. Lautenberg as someone “who was probably born sometime in the late Jurassic period” and “wanders the halls of congress, like some zombie from the night of the living dead, seeking to do whatever mayhem he can on the United States Constitution and the rights of the American people.”

As for McCarthy, she’s “made her living as a politician based on the death of her husband,” who was shot in 1993 while riding a train in New York. As one would expect, according to Tea Party Nation the problem with this tragedy lies in New York’s strict gun control laws, which prevented passengers from being equipped to fight back: “Someone needs to tell Carolyn McCarthy, had her husband been armed that day, he might have had a chance.” Her real aim is “to rip the Constitution apart and strip Americans of their right to self-defense.”

The email then goes on to call liberalism “a mental illness,” perhaps not the best choice of words considering the much discussed nature of Jared Loughner’s psychological state, and argues that “Liberals do not want people to have guns to protect themselves” and “do not want the country to have a missile defense to protect the country.” Instead, they “believe we will be better off individually and as a nation if we are vulnerable,” and they “use tragedies like this to erode our rights.”

One must state it unambiguously: The Tea Party poses a real danger to our democracy. There are so many wicked elements packed into this one email that it’s difficult to determine how to begin to pick it apart.

Let’s start from the beginning, which is perhaps the most despicable. Knowing full well that the broader population perceives conservatives as responsible for today’s pervasive violent political rhetoric, the right has taken the predictable track and promulgated false outrage over liberals’ “politicizing” the tragedy. One would think that they would at least limit the level of duplicity and virulence that undergirds the disinformation upon which their movement is based in light of the attack.

But no. The opening quote is as bad as it gets. It is designed to lead the reader to draw a horribly false conclusion. By quoting the grieving father as saying “we don’t need any more restrictions on our society,” they know that their followers will perceive this as a caution against stricter gun control. But if you listen to the Fox News interview from which this has been culled in its full context, you will understand how monstrous this misquote really is.

It’s difficult to write, in a political sense, about the father’s Fox News exchange because it’s a powerful and heartbreaking moment. But we need to combat the Tea Party’s crude misrepresentation all the more. The first thing we must establish is that he’s not advocating for political action in any form. By bravely pouring out strong emotions, he offers a glimpse into the hell he’s being put through in a manner that evokes tears. He talks about how special his daughter was, and he displays extraordinary level-headedness by explaining that living in a free society carries risks and responsibilities that make it possible for a travesty like this to “happen anywhere.”

As for what can be interpreted as political, he first states unequivocally that “You can’t solve problems with guns, there’s always gonna be more problems” (0:30-0:35). Shortly after he turns to the fact that his daughter was born on 9/11, and he says that Christina would agree that “we don’t need any more restrictions on our society” (1:41-1:44) because, as a man who travels a lot, he and his family have been deeply affected by how “after 9/11 travel became a nightmare” (1:37-1:40). Nowhere does he explicitly single out gun control, though it is not unreasonable to surmise that that’s what he was referring to.

Taken as a whole, the message is ambiguous: cynics on both sides can pick and choose which of these quotes fits their agenda (though I have not heard any liberals single out the “you can’t solve problems with guns” quote). But what we must say with certainty is that the Tea Party Nation email is a diabolical, shocking misrepresentation in an effort to politicize a horrific event by manipulating the words of a victim in support of their pro-gun cause.

And politicizing is exactly what they’re doing. As they see it, we need more lenient gun laws to stop these atrocities, because if more people are armed there’s a greater chance lunatics like Loughner can be stopped, as in the murder of Rep. McCarthy’s husband in 1993. It does not seem to matter that both Rep. Giffords and Judge John Roll own(ed) guns and that a bystander who brandished a firearm proved a distraction for Joe Zamudio, who, prior to tackling and disarming the killer, first dashed at the said bystander before realizing that the assassin was someone else. Even more perverse, Tea Party Nation presents liberals’ calls for gun control as indicative of a larger goal to deny the country a missile defense system and “rip the Constitution apart.”

In truth, Rep. McCarthy has proposed a very minor and sensible piece of legislation that would ban high-capacity magazine clips, since Loughner fired an obscene 31 bullets before reloading, at which point he was tackled and disarmed. This hardly constitutes an infringement on the Tea Party’s arrogantly absolutist and in fact selective interpretation of the Second Amendment.

That the Tea Party would characterize Rep. McCarthy as an opportunist who has “made her living as a politician based on the death of her husband” and that “someone needs to tell” her that “had her husband been armed that day, he might have had a chance” is an evil falsification: she went into politics in reaction to her husband’s murder to fight for stricter gun laws. Imagine if a relative of a victim from the Tucson massacre were to do the same and be labeled an opportunist bent on destroying the Constitution.

But this is what we’re dealing with. The Tea Party knows no bounds. And lest one think this email is an aberration, consider: in the Tea Party Nation email/article titled “The Tea Party Agenda for 2011,” written on January 2, they claim that “Liberal hero and man voted most likely to be an ACLU board member” is “Joseph Stalin,” and in a piece called “Obama Doesn’t Care,” sent on January 5, they accuse the President of deliberately keeping oil prices high because he “does not want America to recover” from the financial crisis and is aligned with “the radical left that hates America.” Clearly, nothing will motivate them to eschew hateful rhetoric and disinformation. Not even a national tragedy.