The endurance of the NRA. 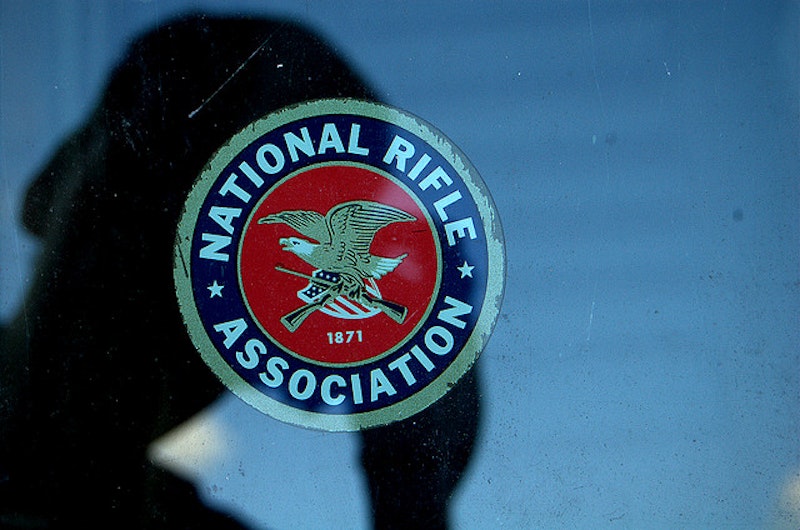 Whenever lunacy prevails the National Rifle Association thrives. The NRA has been quiet so far, waiting a respectful period for the Arizona carnage to subside before they begin their chest-thumping and fundraising as they always do whenever guns do their insidious work. But give ‘em time, give ‘em time.

“At this time, anything other than prayers for the victims and their families would be inappropriate,” an NRA spokesman was quoted as saying.

The Arizona shootings were followed by a rush to buy guns, sales are up by 60 percent, and an equal sentiment to restrict their purchase, the pattern that manifests itself immediately following every national shooting tragedy: the assassinations of John F. Kennedy, Robert F. Kennedy and Martin Luther King Jr. and the attempt on Ronald Reagan’s life and the serious wounding of his press secretary, James Brady, namesake of the Brady Campaign to End Gun Violence. Following the election of Barack Obama, gun sales soared out of fear that the Democratic administration would tighten laws on their availability.

It is the public mood swings between what the NRA portrays as government tyranny and the individual demands for liberty that lends the NRA its oxygen. For the NRA¸  public grief translates into increased membership and a surge in dues. Whether the shooting of Rep. Gabrielle Giffords (D-AZ) and 13 others, will capture the public outrage in the same way the assassination of a president does is yet to be answered. For more than a decade, there has been a benign truce on Capital Hill over the issue of guns and it’s doubtful that either political party is eager to resuscitate the debate.

The motivation to buy guns is a call to arms by those, such as the NRA and right-to-bear-arms proponents, who that fear public tragedies will lead to greater restrictions on the flow of firearms between dealers and purchasers, a God-given right that they claim is guaranteed by the Second Amendment. For years, the amendment itself had been debated, disputed and widely interpreted because of a seemingly misplaced comma and sloppy sentence structure. That innocent but errant comma is the scholarly difference between individual rights and the urgency to form militias.

Already two members of Congress have said they intend to arm themselves when roaming their districts for meetings with constituents; another congressman wants to make it illegal to carry a firearm within a 1000-foot zone of a public official; another proposes making it a crime to shoot a member of Congress, as if murder isn’t already a crime; yet another wants to erect a bullet-proof Plexiglas dome separating the galleries of Congress from the floor; and finally, there is a major push to ban the sale of high-capacity clips such as the 33-bullet magazine employed by Jared Loughner in his Tucson rampage.

There are an estimated 300 million guns (nobody really knows for sure) in circulation in America, according to the Bureau of Alcohol, Tobacco and Firearms, many of them registered and owned by law-abiding citizens and many of them not. Some of the guns used in the drug wars in Mexico are black market exports from America and a source of tension between the two countries. And many of the illegal guns used in the commission of crimes in Maryland can be traced to Virginia where guns are as accessible as, say, Hershey’s Bars.

Arizona is a “right to carry” state, as is Virginia, where any nut-cake can walk into a store, buy a handgun and walk out with a 9mm Glock strapped to his hip. This is what Loughner did. And for reassurance, no questions asked, he also purchased a high-capacity 33-bullet clip and a second as back-up to his manic intentions. In fact, two men in the group that had gathered outside the Tucson Safeway to hear Rep. Giffords speak were carrying firearms but didn’t draw their artillery on Loughner when he opened fire on the crowd. Arizona even allows people to carry weapons in bars and is now considering expanding arms-bearing rights to college campuses. Utah is the only state that allows firearms on college campuses. Think of the movie Animal House, and ask yourself if you’d go to a frat party where the fraternity brothers and their friends are armed and drunk.

The Arizona occurrence would never have happened in Maryland. For openers, Maryland is one of five states that prohibit the sale of high-capacity clips. The clips were outlawed for a time nationally but the ban was allowed to expire in 2004. And again, Maryland has a 10-day waiting period which is designed to give hot-heads time to cool down and prevent many crimes of passion. During that period, criminal background checks, medical and psychiatric history and personal references are searched for red flags. Maryland’s gun control law is among the first and strongest in the nation. It was adopted in 1972 and became the model for the identical Massachusetts law which was enacted the following year. The Maryland Court of Appeals recently upheld the legality of the state’s concealed-carry permit requirement against a law suit that claimed the state had no right to decide who can carry a handgun.

The nation’s oldest gun control law is New York’s Sullivan Act, which was adopted in 1911 and gives local governments the authority to issue permits for concealed weapons. In its early days, the Sullivan Act was viewed as a form of political patronage to friends and allies of Tammany Hall who were easily awarded permits. Gun controls vary from state to state where they exist. The strictest gun control laws are in states along both coasts while states in the south and west have little or no regulation and are permissive to varying degrees. In those gun-toting states, gun ownership is viewed as high culture and hunting is a rite of passage.

There have been dubious studies and books written in the defense of an armed society. They posit the notion that an armed society is a civil society in the sense that not knowing who’s armed and who isn’t would inhibit reckless and criminal behavior. In fact, they argue that crime was actually reduced in states where citizens are allowed to carry guns. Much of the argument and its conclusions have been debunked and disproven. In fact, it’s becoming increasingly clear that an armed society is a dangerous society. Ask the folks in Tucson. Statistics show that states with higher gun ownership have higher gun crime rates and states with lower gun ownership have lower gun crime rates.

The NRA is considered one of the top lobbying operations in Washington and much of its clout derives from its membership list of four million gun-owners. In 2010, the NRA spent $2.045 million on lobbying alone out of its annual revenues upwards of $150 million. In the 2009-2010 election cycle, the NRA spent $12.2 million in its efforts to defeat and elect candidates, with $1.4 million in campaign contributions going directly to candidates.

As the NRA likes to say, guns don’t kill, people do. Yes, but they do it with guns.