The Game Has Changed, Holmes

The justice process will eventually find Holmes guilty of multiple counts of homicide. 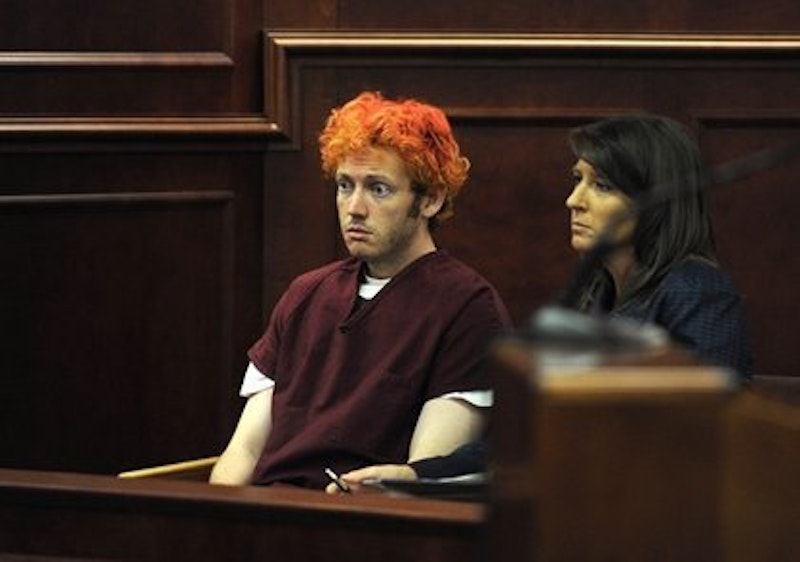 No human crime faces greater repercussions and has greater moral implications than murder. It is a singular action, contradictory to human evolution, yet one whose influence in guiding the development of philosophy, religion, and government has been immense. Religion forbade it; government codified it; while philosophers sought in it a greater insight to the mind. In this light lies the intrigue that the man who currently stands accused of the mass killings at an Aurora, CO movie theater in July was a student of the mind and brain.

With a virtual media blackout on the trial in effect by its presiding judge, any information about James Holmes has translated to instant headlines. It’s revealing that in an age of media over-saturation his is a story that’s become increasingly difficult to stretch into a sensational sequence. At its most compelling it is a story of idyllic suburban upbringing and academic achievement with a nearly non-existent rising action that peaks in unmatched brutality. Yet criminal investigators and psychologists alike have agreed with unanimity that Holmes' actions and behaviors leading up to the crime each served as independent red flags.

Given the nature of the crime, the justice process will eventually find Holmes guilty of multiple counts of homicide, yet there are major questions which may prove more significant. What medical criteria can effectively determine him to be clinically insane? Furthermore, can future laws be derived from a judgment passed on the insane in order to effectively prevent reoccurrence of the crime? In essence society is again finding itself in a situation very much like that of the Columbine shootings in 1999. The problem is that we sought to understand the reasoning behind that crime then, and did not move very far beyond stereotypes of misunderstood children, absent parents, and lax weapon-control laws. The media coverage during this particular time read like a sermon in which pop culture and black magic were not only the same but in fact thriving in the backyards of small town America.

In order to make a more substantial argument one has to look less at the right or the left. One must look underneath the very spectrum on which they exist. Albert Camus argues in The Fall that the seed of moral wrong can grow comfortably and in fact thrive within the fabric of all members of society, especially within its elite. Its narrator, the lawyer Jean-Baptiste, reveals a logic reading that if a man works his life towards being in a position of repute it serves him doubly as being an unimpeachable alibi. Whether Holmes was an existentialist is anyone’s guess yet the connection remains haunting.

It becomes clear why many who knew Holmes even tangentially did not see much obvious harm in his character other than his social manner. It was an awkwardness chalked up to belonging to a wacky scientist stereotype that the man seemingly embraced. The prevailing mindset among many who are still in disbelief over the event is that someone as ignorant towards their peers as Holmes was as unlikely to take any great interest in harming them. The ultimate peril emerges in that if one cannot see something whose nature it is to not be seen then a constant state of surprise will reign.

So there is yet another problem, which has at best an unsatisfying solution. The issue of domestic security can now be added to an expanding Wikipedia entry of an American decade defined by political, economic, and now moral soul-searching.

It is ironic that the only reasonable wisdom in such a time comes from outside our culture. Philosophy carried over from the ancients of the Eastern world would emphasize that in the answer to an inquiry seemingly peripheral to the chief argument lies the essence which unlocks the key to the argument itself. However, in the current global landscape, in which the politics and economies of foreign countries are increasingly eclipsing those of America's own, the only resort left for America is to continue to search within itself for insight.