Meanwhile Rowe's stuck with no one really listening. 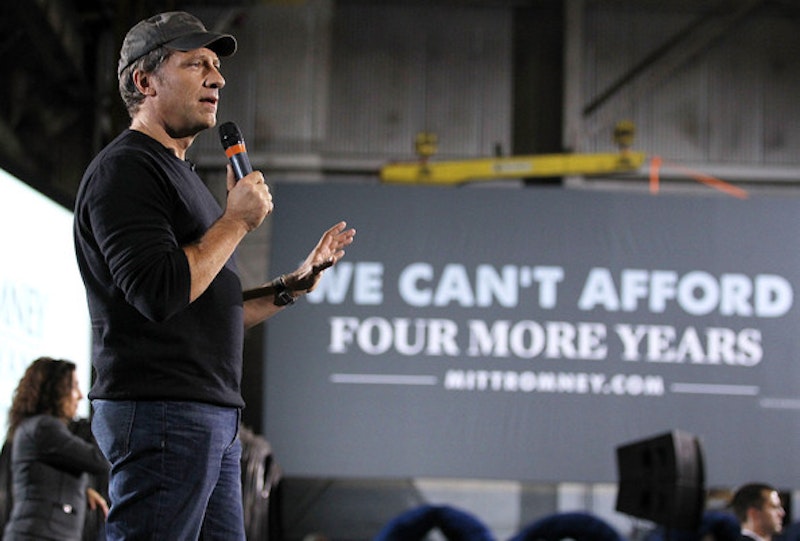 Only a couple of weeks after Mother Jones leaked footage of Mitt Romney's now infamous "47%" remarks, the Republican presidential candidate brought in popular TV host Mike Rowe to lend him some valuable working class cred. On Sept. 26, during a campaign stop at the American Spring Wire factory in Bedford Heights, OH, Rowe took the stage to talk about mikeroweWORKS.com, a non-profit founded by Rowe and his supporters to "encourage a larger appreciation for skilled labor." Rowe summed up his argument in a letter sent to Romney earlier in the month:

Even as unemployment remains sky high, a whole category of vital occupations has fallen out of favor, and companies struggle to find workers with the necessary skills. The causes seem clear. We have embraced a ridiculously narrow view of education. Any kind of training or study that does not come with a four-year degree is now deemed “alternative.” Many viable careers once aspired to are now seen as “vocational consolation prizes,” and many of the jobs this current administration has tried to “create” over the last four years are the same jobs that parents and teachers actively discourage kids from pursuing.
Rowe had sent a similar letter to Obama back in 2009 but never received a reply. You can read both here. And while Rowe's arguments make a lot of sense, it's unfortunate that he doesn't see the political machinations at work: the Romney campaign, desperate to win over lower income voters even before Romney labeled them lazy government-dependents, brings in a respected TV show host with all-American macho appeal. That Romney introduced Rowe by saying, "he's not here to endorse me" (no doubt something Rowe stipulated before he agreed to appear), makes it a somewhat less sleazy version of Mike Huckabee's Chuck Norris ads. If Dog the Bounty Hunter hadn't of come out in support of gay marriage I wouldn't have been surprised if he'd shown up at a campaign stop or two.

But maybe Rowe just doesn't care. It's obvious he wants Americans to take this issue seriously (as well we should) so maybe he thinks, what the hell, publicity is publicity. But early reaction indicates that everyone's too caught up in the discrepancy of the Dirty Jobs guy and the 47% guy sharing the same stage. The first comment on Gawker's article "Mike Rowe Takes on Dirty Job of Making Mitt Romney Look Electable" pretty well sums it up: "Dammit all, I really like Mike Rowe. I am confused and torn."