How Could Obama Lose?

He's going to have to work at it. 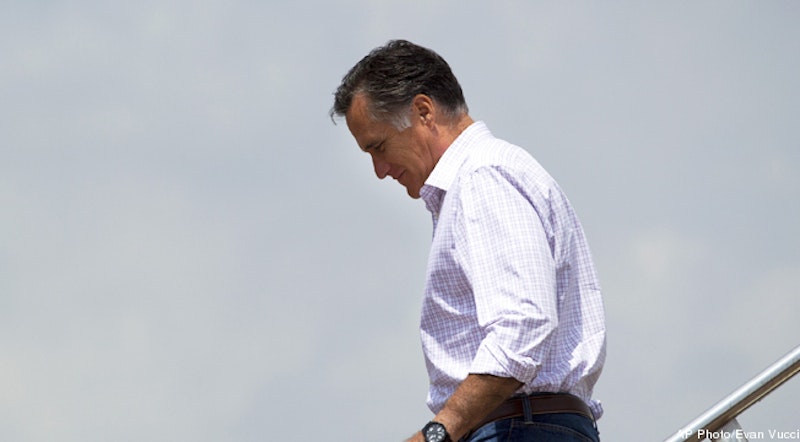 Yesterday, The Wall Street Journal’s Gerald Seib published an article insisting that the presidential race isn't over. Unfortunately for him, the Journal’s editorial board, and Mitt Romney, the piece is so weak that it feels more like the final nail in the coffin than a stirring rallying cry.

Seib's three reasons Romney might win are (1) great Republican enthusiasm, (2) strong conservative support and (3) fickle undecided voters. But, (1) most models show Democrats closing, and in some cases even surpassing, the Republican enthusiasm gap; (2) Romney's ability to hold his conservative base is the bare minimum he should be able to do, and is a big part of why he's been unable to appeal to the center; and (3) there just aren't that many undecided voters left, and all evidence suggests that they're swinging strongly to Obama, not Romney.

Contrary to the WSJ, most experts and pollsters suggest that Romney's campaign is in deep trouble. Nate Cohn writes:

While Obama’s 4-point lead is very modest by historic standards, it’s larger than it sounds. Only a sliver of voters […] remain undecided and Obama holds approximately 49 percent of the vote, suggesting that Romney will need to fare exceptionally well among the remaining undecided voters and then further count on either low-Democratic turnout or Obama supporters switching sides. All of these scenarios are possible; none are likely.


The New York Times’ Nate Silver concurs. His model, which aggregates polls and economic factors, and takes account of enthusiasm and likely voter models, gives Obama close to a 78 percent chance of winning. If the election were held today, Obama would have a 95.7 percent chance of winning. Silver's model also shows Republican chances collapsing in the Senate. Sam Wang at Princeton goes further, predicting that Republican's are likely to lose not just the presidency and the Senate, but also the House.

None of this means Obama will definitely win. But if the race stays as it is, Romney's chances are slim. The fact that Republicans really hate Obama, or that conservatives haven't abandoned Romney for his flip-flops, or that there are still undecided voters—we know all that already, and they are already influencing and measured by polls. They don't show Romney might win; they show that some people will vote for him. But not enough.

So what would have to happen for Romney to win? Something fairly dramatic. Here are some possibilities.
Economic Collapse: The most likely cause of this is some sort of catastrophic financial meltdown in Europe. If the American economy nose-dived into another recession, and the answer to the question "Are you better off than you were four years ago?" suddenly became "Hell, no!" for a large percentage of the population, Obama could be in trouble. Even though most people dislike Romney, a financial apocalypse could give him what he's been praying for—an election that's a pure referendum on Obama.

Of course, Romney could lose even in this case if he tried hard enough (can't you imagine him going on television and saying something like, "Our first concern has to be Wall Street"?) But presuming he could manage to not be an idiot, an economic disaster would give him a real shot at the White House. This is probably his best hope.

Foreign Policy Disaster: This seems to be what Romney is most consciously rooting for. He thought for half a second that the diplomats killed in Libya would be his chance to paint Obama as Carter… but his eagerness betrayed him, and he mostly ended up looking callous and, even worse, desperate. That stumble puts him in a poor position to capitalize on another foreign policy crisis. In general, it's bad form to appear to be rooting for America to embarrass itself on the world stage. Moreover, most foreign policy crises tend to help the President, at least in the short term.

Still, if you're Romney, you might be able to imagine scenarios in which Obama could mess up so badly, and so obviously, that it would really hurt him. I'm having trouble doing the same… but if war actually breaks out between Israel and Iran, anything is possible.

Horrible Debate Performance/Huge Gaffe: Most people have already made up their mind about the election at this point, and so it's unlikely that the debates will change all that much. Still, if Obama stands up and says something truly outrageous or bizarre, like maybe, "Only 15 percent of the country is unemployed; the rest are doing fine.") it could hurt him.

The problem is that, based on the campaign so far, Romney is far more likely to put his foot in his mouth than Obama is. And since Romney's behind, he has a lot more incentive to be aggressive, and therefore a lot more potential to stumble. I imagine Obama will be low-key, cautious, and as boring as possible. He knows that if he's just patient, he's going to win… and there are few politicians as patient as Obama.

There are other possibilities too, I suppose. Maybe all the polling is off for some unknown reason. Maybe Democrats just won't turn out to vote. Maybe there's some massive scandal from the past four years that Obama has buried, and which the GOP is just waiting till the last minute to reveal.

The one constant with all of these scenarios, though, is that they're mostly out of Romney's control. His campaign had its chance to move the electorate—by tacking to the center, selecting a vice presidential pick, staging a persuasive convention—and in every instance, it's failed. What's left is to hope that something changes the dynamic.