And you thought traditional politics was sleazy. 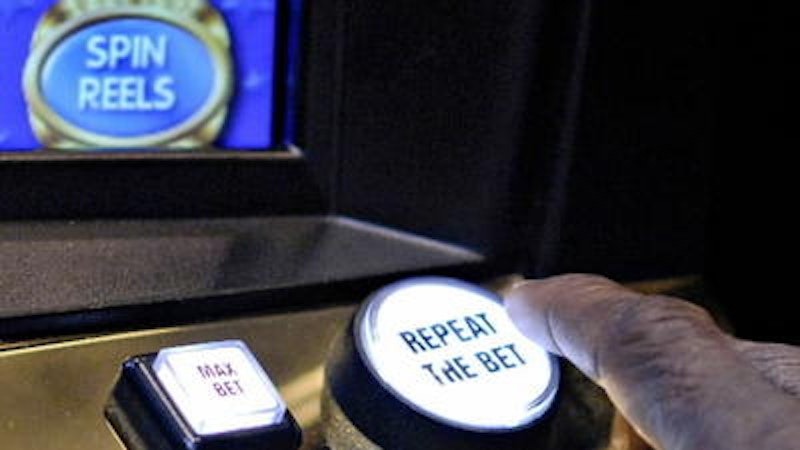 Democracy in action doesn’t come cheap. In 1973, when Maryland’s constitution had to be stripped of its prohibition against legalized gambling to make way for the state-sponsored Lottery, not a dime was spent on advertising to make the change and advance the case. In 2008, the momentum of issue fatigue and an $8 million media duel helped to persuade Maryland voters to cast enough ballots to legalize slot machines after years of debate. The bulk of it was spent by proponents. So far in 2012, competing sides have spent nearly $20 million on Question 7, pitting casino entrepreneurs against each other in the battle over a new multi-million dollar franchise that also involves heavy spending by the buildings trades unions.

The numbers are staggering so the eventual rewards must be equally eye-boggling. Question 7 also includes expanding the money-grab to table games at other Maryland gambling locations. According to reports, MGM, which wants to build a new Las Vegas-style casino at National Harbor, has so far contributed $8.4 million to the campaign to approve Question 7; Penn National, which has the Hollywood Casino in Perryville as well as a similarly named franchise in West Virginia, has raised $9.5 million to block the ballot question; Caesars Entertainment, which has been awarded the Baltimore franchise, has kicked in $1.25 million in support of casino expansion; the Peterson Companies, developer of National Harbor, has added $400,000 to the proponents’ cause; and the Washington Building and Construction Trades Council, has spent $2.7 million in media advertising to promote the sixth casino. Lobbyists are cashing in on the lavish spending as well.

Only David Cordish, owner of the Maryland Live! Casino in Anne Arundel County, has been non-committal so far on Question 7 although he fought against its approval during the special session of the General Assembly.

That is an obscene amount of money to spend on a ballot question. The competing campaigns on Question 7 are really a two-part affair with a much less expensive pathway to victory or defeat that really hasn’t surfaced yet. It is, rolled into one, both a statewide campaign and a local referendum that can be won or lost on the ground locally easier than on the statewide airwaves.

Question 7 is a statewide referendum that must be voted on in a statewide general election. But to assuage the feelings of opponents in Prince George’s County—and there are many—as well as to meet conditions laid down by the County Council, the addition of a sixth casino must also be approved by a majority of voters in Prince George’s. There are, in effect, two elections in one and if Question 7 is defeated in Prince George’s the new casino is deader than a Pterodactyl. Old fashioned organization politics, which PeeGee factotums knows a thing or two about, may trump all of that mind-numbing electronic commotion.

The breadcrumb trail to a victory or loss lies in Prince George’s and leads directly to the precincts and the black churches, many of them mega churches with thousands of members. Black preachers have an earthly as well as a spiritual mission. They are businessmen as well as men of the cloth. They understand that a gambling emporium in the populous minority county will prey upon those who can least afford to gamble away a paycheck. And most important, they also know that a gambling undertaking in their county will affect the Sunday collection plate.

Led by the black churches (PeeGee is 74 percent black), the county has historically opposed casino gambling and its delegation to Annapolis refused to have the county included in the original slots proposals presented by both Govs. Robert L Ehrlich Jr. and Martin O’Malley. During his two terms as county executive, Parris Glendening presided over a huge gambling operation called “Casino Nights” which were run by the fire departments and the sheriff’s office. Glendening finally abolished the gambling operations because of their corrupting influence on county government. But later, as governor, Glendening had tacitly agreed to support slot machine gambling but reversed course and became a fierce opponent when word of the quiet understanding with Baltimore Mayor Kurt Schmoke leaked out.

Succeeding Prince George’s County executives opposed slot machine gambling until Rushern Baker, a former delegate, was elected to the office last year. Baker campaigned full-force for the addition of a glitzy new casino at National Harbor, on the Maryland side of the Potomac River just a ramp off the Woodrow Wilson Bridge.

Baker also had the eager connivance of Senate President Thomas V. Mike Miller (D-Calvert-Prince George’s) who held the entire General Assembly hostage until he won approval of the additional casino. In fact, Miller allowed the state budget to die on the final night of the regular session rather than sacrifice his cherished gambling legislation.

And here’s a humorous twist to the entire proposition: The state has just awarded $5 million to the University of Maryland Medical Systems to establish a gambling addition center at the same time it is promoting approval of potential gambling addition by advocating a sixth casino. At a separate news conference almost simultaneously, three county executives—Ken Ulman of Howard County, Isaiah Leggett of Montgomery County and Baker of Prince George’s County—all cozy with the building trades unions, urged approval of Question 7 as a plan to create jobs.

Opponents of Question 7 argue about the fairness of a sixth casino to the owners and operators of the original five even though they would be compensated by a reduced tax rate against potential losses from the additional competition. No one knows what the cost to the state treasury will be. Penn National, operator of Hollywood Casino in Perryville, has recently turned back 500 of its original allotment of 1500 slot machines because of declining revenues. The casino at Ocean Downs, outside of Ocean City, has been measurably underperforming. Revenue projections by experts in and outside of state government have been widely inaccurate and highly overstated.

There is, too, the question in Baltimore about a sixth casino cutting into local gambling revenue which is dedicated, perhaps prematurely, to reducing property taxes which are double those of any other subdivision in the state. And there is also a question about the wisdom of adding a sixth casino when only three of the original five are open and operating below expectations.

The reality of legalized gambling is that there are only so many recreational dollars to spread around. The other reality is that whenever gambling interests contaminate the political process the system breaks down under the weight of money.