Rooting for Obama, the Murdering President

I'm On Obama's Side, But He Doesn't Deserve Reelection. 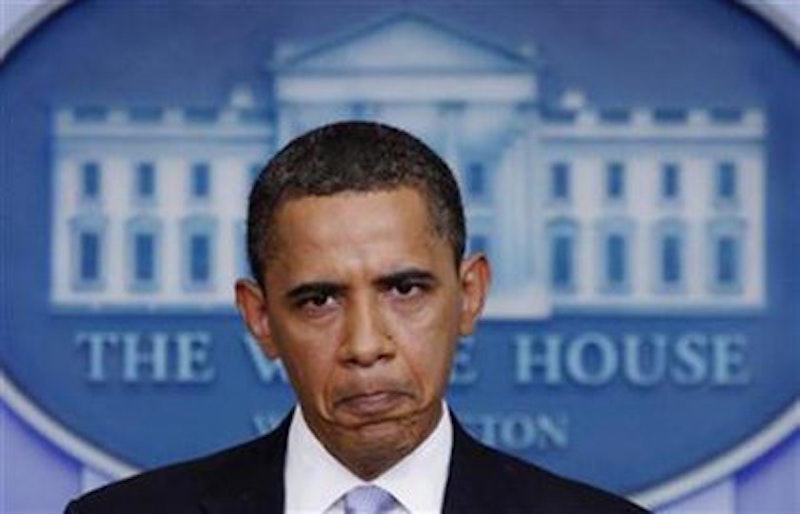 As an obsessive presidential horserace watcher and partisan liberal Democrat, there's not much in my lifetime that's been as thoroughly satisfying as watching Barack Obama campaign. The 2008 nomination battle was a glorious slow motion, ballet-like "fuck you" to the centrist Democratic establishment, as Bill Clinton, the-most-talented-politician-of-his-generation™ was made to look like the callous, flat-footed, principle-less thug I'd always known he was. Shortly thereafter, the press was surgically removed from John McCain's ass, and the war-mongering war hero picked up his inflatable ego and staggered off the national stage, semi-sentient VP pick in toe.

And now, Mitt Romney, with a dreadful economy at his back and the unlimited resources of an engorged plutocracy in his sails, is losing, losing, losing like the losing loser that he is. Everybody says it's because he's a rotten candidate… but the fact is, every candidate who runs against Obama is a rotten candidate, because Obama is the goddamn Muhammad Ali of US Presidential politics.  He floats like a butterfly, and he stings your ass off.

So, yeah, rooting for Obama is fun. Which is why it's a bit of a buzz kill to have Conor Friedersdorf pop up and remind me that, besides being the most talented politician of the last half-century, Obama is also an unrepentant child-murderer.

Obama terrorizes innocent Pakistanis on an almost daily basis. The drone war he is waging in North Waziristan isn't "precise" or "surgical" as he would have Americans believe. It kills hundreds of innocents, including children. And for thousands of more innocents who live in the targeted communities, the drone war makes their lives into a nightmare worthy of dystopian novels. People are always afraid. Women cower in their homes. Children are kept out of school. The stress they endure gives them psychiatric disorders. Men are driven crazy by an inability to sleep as drones buzz overhead 24 hours a day, a deadly strike possible at any moment. At worst, this policy creates more terrorists than it kills; at best, America is ruining the lives of thousands of innocent people and killing hundreds of innocents for a small increase in safety from terrorists. It is a cowardly, immoral, and illegal policy, deliberately cloaked in opportunistic secrecy. And Democrats who believe that it is the most moral of all responsible policy alternatives are as misinformed and blinded by partisanship as any conservative ideologue.

Friedersdorf includes a number of links to document his piece. You can check them if you'd like. Personally, I've never been able to read an article about our drone program all the way through. I get a couple sentences in, usually, and can't stand to read the rest.

Friedersdorf might say that my unwillingness to look this in the face is a sign of my partisan hackery… and he's probably right. When Bush and Cheney tortured people to death, or randomly decided to slaughter large numbers of people halfway around the globe, I could at least feel like they were on the other side. I never voted for them… and, in fact, in 2008, voted expressly to get them and the deranged, slavering party of which they were the leaders to stop. "Hope" and "change" may sound like empty slogans, but I was hoping specifically for a world in which the US significantly reduced the volume of wholesale slaughter it performed in the name of imperial security.

And I guess I got that to some extent. Obama officially forswore torture (though whether we're still torturing or not is a more an open question than I'd like it to be). He got us out of Iraq; he didn't invade Iran. He did invade Libya, of course, directly contradicting his own stated principles, as Friedersdorf points out—but at least that was a limited and more or less successful engagement, rather than the nightmares we'd grown to expect from Bush.

Which is to say, Obama is a vicious mass murderer… but at least, as presidents go, he's a fairly effective and calculating vicious mass murderer. Andrew Sullivan, in his gushing, breathless way has been comparing Obama to Reagan—conveniently forgetting that Reagan was a corrupt fool, whose signature achievements in foreign policy were Iran-Contra and happening to be on the scene when Gorbachev turned up. Obama, it seems to me, is much more like Eisenhower, the man who quietly and cold-bloodedly imposed American hegemony from Vietnam to Iran without ever getting his hands dirty. Or at least, without letting anyone see his dirty hands.

Vietnam and Iran didn't turn out so great for us. In retrospect, Eisenhower's Cold War policy looks too clever by half. Obama's machinations in Pakistan probably won't turn out well either, certainly not for the Pakistanis.

Which, again, is something I try not to think about too much, because… well, mostly because I don't feel like there's anything I can do about it. With Bush, I could at least root for his downfall. But I'm on Obama's side. I hoped he'd fix this; he didn't. I'm not sure where else to go.

Friedersdorf has a suggestion: he wants me to go to libertarian Gary Johnson. That's who Friedersdorf will vote for. But he's able to make that decision in part because he's convinced himself that Mitt Romney would not be worse—or at least not significantly or exponentially worse—than Obama.

What about the assertion that Romney will be even worse than Obama has been on these issues? It is quite possible, though not nearly as inevitable as Democrats seem to think. It isn't as though they accurately predicted the abysmal behavior of Obama during his first term, after all. And how do you get worse than having set a precedent for the extrajudicial assassination of American citizens? By actually carrying out such a killing? Obama did that too. Would Romney? I honestly don't know. I can imagine he'd kill more Americans without trial and in secret, or that he wouldn't kill any. I can imagine that he'd kill more innocent Pakistani kids or fewer. His rhetoric suggests he would be worse. I agree with that. Then again, Romney revels in bellicosity; Obama soothes with rhetoric and kills people in secret.

What that assessment leaves out, it seems to me, is the fact that we have actually had a Republican president fairly recently. We have some sense of what the party's priorities are and how they function when in power. Romney has not repudiated any of Bush's legacy; he has many of the same advisors. The same people who were calling for an invasion of Iraq are now calling for an invasion of Iran. And, yes, invading Iran, or Syria, would be a lot worse than anything Obama's done, at least if you believe that killing thousands or tens of thousands of people is worse than killing hundreds. It's true that you can't be sure what the future will hold—but based on recent Republican governance, and on Romney's rhetoric, I think it's reasonable to argue that he's much more likely to involve us in some catastrophic military mess than Obama.  Less-likely-to-invade-Iran is not exactly a full-throated endorsement of Obama, but it is a reason to vote for him.

Which doesn't necessarily mean I will in fact vote for him. I enjoy rooting for him. I honestly think he will be a significantly better president than Romney—because of the not-invading thing, because of domestic policy, and because the campaign has made me think that Romney is an incompetent bumbler who shouldn't be allowed anywhere near the White House. But, nonetheless, I agree with Friedersdorf: Obama's civil liberties record and his drone war should be invalidating. Child murderers shouldn't be reelected.  I live in Obama's home state of Illinois, so it doesn't much matter who I vote for anyway. But it's possible I'll cast my useless ballot for Johnson, not so much in hope as in despair.