The Fight for the Soul of America 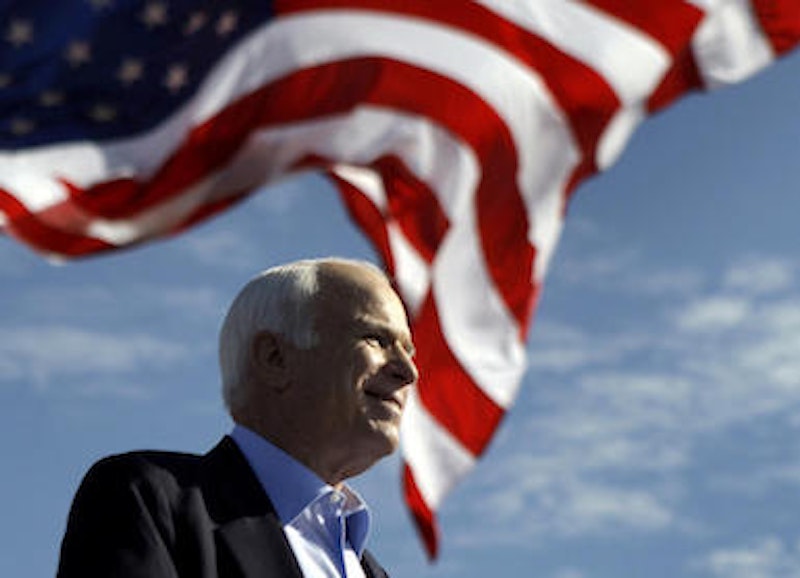 The death of John McCain has caused many people, thinking about his legacy, to reflect on what America really means, the essential American values for which Americans have lived, and for which Americans have died. Perhaps the shade of McCain is still hovering around, shadow-boxing with Donald Trump for America's very soul. The man was nothing if not a warrior.

Joe Biden, in his funeral oration, struggled through the familiar sentences as well as anyone. “John believed so deeply and so passionately in the soul of America… His conviction that we, as a country, would never walk away from the sacrifice generations of Americans have made to defend liberty and freedom and dignity around the world… His belief, and it was deep, that Americans can do anything, withstand anything, achieve anything. It was unflagging and ultimately reassuring. This man believed that so strongly. His capacity that we truly are the world's last best hope, the beacon to the world."

The syntax is distinctively Biden’s, but the sentiment is widely shared, or at any rate expressed.

So deeply did McCain believe in America that, during the 2016 nominating contest, he, like Marco Rubio and John Kasich, expressed his absolute faith that Americans would never elect someone like Donald Trump. That's just not who we were, early '16. And now, the sudden re-doubling of narratives of American identity accompanies the crisis of progressive faith precipitated by Trump's election, which some people have experienced as a kind of narrative breakdown or even as a psychological crisis. That's the problem with living as though the world were a story, or leaving the world in favor of a story. The world does not in fact have a sensible plot, and you're liable to be surprised every day in every way by the onslaught of reality.

America, it’s often said, isn't so much a country as an idea. If so, I wouldn't worry about it too much, or I'd leave it to the idea professionals (oh, philosophy professors, perhaps). Were I to head down that road, however, I might tell you that America is the story of freedom, or I might characterize it as a story of slavery. I might tell you that it's about rugged individuals, or about everyone coming together in a collective identity; that it's about human equality, or entrenched hierarchy; that Thomas Jefferson is its emblem or FDR or Martin Luther King or Malcolm X or Betsy Ross or Lucretia Mott; it's the story of capitalism or it's the growing welfare state; it's the will of God or the robber barons or the soldiery; and so on. Now let me ask you this. If I did tell the story in any of these ways, for example in a Ken Burns-like documentary, or in a textbook, or in a political speech, how could you tell whether I was right?

Here’s a question with no or many true answers: What’s the real story of America? What are the real American values, the real American character, the real American dream? The struggle about this, among historians, pundits, politicians, and so on, is not about what’s true and false, though the various claims are formulated as though evidence could count one way or another. Claims about the real essence of the American story are about what the person doing the claiming wishes were true and what her or she wants you to believe. Above all, the claim that it’s already true is supposed to motivate you to make it true. To put it plainly: telling "the" story of America in this manner is manipulation.

It really is an amazing style of reasoning: whether or not x is true, it is more likely to become true if more people believe it to be true. The idea that justice will inevitably win in the end is supposed to make it likelier that people will work for justice now. I’d like to see some evidence for that. It strikes me that the belief that justice will roll down like a mighty stream might motivate good work, but the idea that the America is a nightmare of injustice might have the same effect. Or either might leave you doing nothing, because after all justice will roll down whether you do anything or not, or on the other hand is impossible for depraved people like us.

The fact that more or less all the facts are compatible with more or less any of the narratives means that advocates of any particular Story of America can't even say what you should expect to happen if their own version is true or not happen if it isn't. Maybe they hope to persuade you instead by their inspiring tone of voice; they’re making no empirical assertions, or they’re making pseudo-empirical pseudo-assertions. And I hope the American story tellers aren't asserting that the fact that it would be excellent if justice rolled down like a mighty stream is itself evidence that it will, or that it's true if it has good effects to believe it. That's just silly.

Re-narrating American history is an old persuasive tactic, but perhaps it has become a reflex since King, who precisely tried to re-narrate American history as a story of freedom and equality: the story of us, living out the true meaning of our creed. Right, it was strategic, but it was extremely well-written and inspiringly delivered. Its power has faded under infinite repetition by less gifted narrators, and it’s worth noting that even as millions of Americans came to believe it, or at least repeat it, racism ticked right on underneath the story-telling.

Does Trump tell the real story or America and represent authentic American values, or does Alexandria Ocasio-Cortez? I'm not sure anything in the actual world turns on this question, but absolutely everything depends on it in the realm of story, or the realm of pure Platonic Ideas: it makes all the difference in the fictional or virtual America. Cede that realm to your opponents with a grin and see if you can't take control of the school board and the zoning commission, is my advice.

I know what I'd like the meaning of America to be; you can read it in Thoreau's Civil Disobedience. I want it to be a history of anti-authoritarianism, cussed independence, direct contact with material reality, and egalitarianism. But telling that story again changes little in the world. (However—for real—Americans are the only people who understand popular music. And barbecue.) I'll keep trying to sell you this story, and I can give you a lot of "evidence." But really I'm just wishing, and I'm just trying to get you to nod along by equating my preferred story with your national identity, and disqualifying those who disagree as failures or traitors.

This isn't liable to help a lot, but my theory is that America is exactly what it is. You can try to tell me the essence of that if you want, or narrate it all in an inspiring 1000-word column or eulogy. Sorry if I nod; I've heard the stuff before.