An Ancient Historian on the Crisis of American Democracy 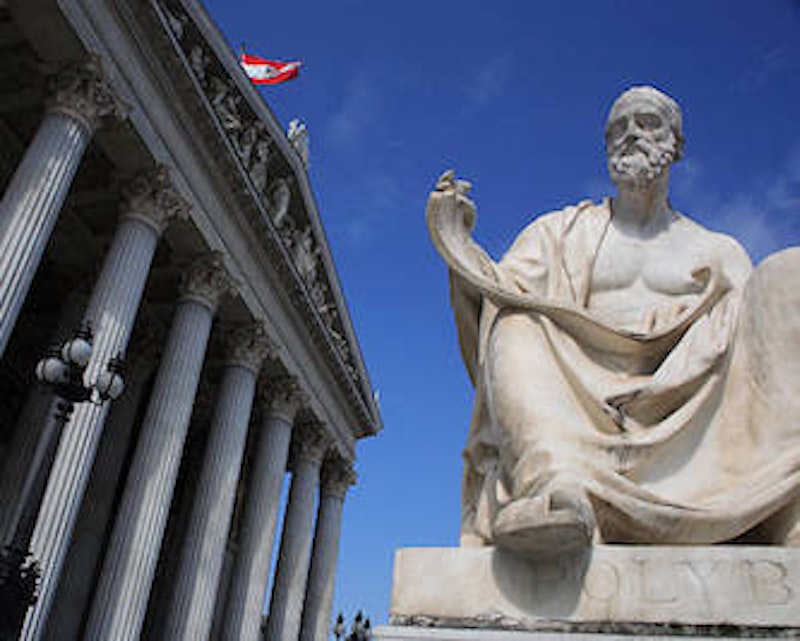 The historian Polybius (c. 200-118) lived during Rome’s meteoric rise to imperial power. Polybius sought not only to record the events shaping his world, but to explain them. He believed that one could rationally account for the course of history, and through the lens of his analysis we can at least begin to evaluate certain critical but latent tensions in American democracy today.

Polybius was an educated and aristocratic Greek. Due to his support for anti-Roman causes, Polybius was deported to Italy as a political prisoner. There he quickly became the mentor and social client of one of Rome’s most influential politicians. Traveling as an attaché to his Roman patrons, Polybius witnessed many of the important events of the Second Century Mediterranean world firsthand.

A central tenet of Polybius’ Histories was his theory of anacyclosis. Polybius maintains that the political organization of a society evolves according to a predictable, regular, and cyclical sequence.

The process of anacyclosis begins with despotism, the natural, lawless state of humankind. The despot enforces his authority through violence and the threat of violence. Over time, the manifest utility of more equitable leadership builds traditions of social responsibility, urging the community away from despotism toward monarchy, which Polybius views as one of three primary forms of government. However, though monarchy itself poses no barrier to justice, Polybius contends that each of the three forms of government is susceptible to social degradation within constitutional limits. Thus monarchy begets tyranny as the appetites and demands of the ruler surpass his concern for the state and the state’s ability or will to support them.

According to Polybius, the tyrant’s encroachment upon the civil prerogatives of good men will typically result in an aristocratic reaction. Led by the elite (aristoi means “best”), society will politically regenerate and revitalize itself by expelling its Tarquins. Aristocracy, though, degenerates into exploitative oligarchy through the same corruption that undermines a functional monarchy. Under the oppression of oligarchs, the People must overthrow their rulers and seize the reins of government themselves. And just as monarchical and aristocratic states suffer the erosion of their foundations by the abuse of authority, democracy finally begets mob rule. From this chaos and violence there emerges a despot, beginning the historical cycle again.

I don’t intend to argue the merits of anacyclosis as such. Many substantive, perhaps fatal challenges can be mounted against Polybius’ assumptions, arguments, and conclusions. I don’t intend to rescue him from objection, but obscurity. Used as a framework for analysis, anacyclosis offers a view of American democracy unadulterated by our present hopes and fears.

Though Polybius’ analytical categories at first seem simplistic, they’re quite flexible. He documents religious, military, economic, and political traditions as he describes the Roman state. Viewed as expressions of power, rather than its source, one can easily provide examples of e.g. religious monarchy or corporate oligarchy. For all its ragged edges, history also confirms much of what Polybius predicts. Several elements of Polybius’ theory attract my attention.

First, flux is the unifying element in history as he understands it. This change represents neither progress nor decline. Polybius eschews both naive idealism and colorful eschatology, resisting the temptation to predict the end of history. Contemporary categories of political analysis favor a static view of society and government over time. Historical analysis cannot disconfirm change altogether, but modern analytical models represent most eras as repressive of primordial social forces and thus stagnant. Power, identity, and law shift into new constellations with many other social forces, but the conceptual meridians of e.g. religion, race, and gender remain fixed.

Many progressives argue that formal democratic institutions, such as suffrage, are only as meaningful as a society’s cultural, economic, and other forces are balanced. True democracy can’t be achieved without societal reinvention, they argue. Conservatives, on the other hand, lament two centuries of Constitutional reprobation and hope for a return to first principles. In either case, we can only achieve political equilibrium and prosperity if we move forward or back. The sharpest disputes among Americans concern which is the proper path, but we rarely question whether democracy can effectively chart and traverse either.

Polybius contends that, though flux unifies the course of history, its evolution follows a regular sequence of antitheses. Polybius posits three linked pairs of constitutionally identical form. Each valid form of government contains within it the causes of its own failure. The flux of history consists of the process of those causally predestined failures, each followed by a political correction to social dysfunction.

Anacyclosis applies a fatalistic logic to democratic governments, as it does to monarchy and aristocracy. Though each resolves the problems created by a decadent political tradition, it’s in turn exhausted and creates analogous problems along the lines of the novel, “corrective,” constitution. Just as tyranny’s an abuse of kingly authority, and oligarchy a betrayal of high ideals, mob rule expresses the irrational will of massive social forces through democratic institutions.

Because both democracy and mob rule appeal to the judgment and emotions of the People, they’re differentiated only by the relative prevalence of corruption, demagoguery, and violence. These are the natural parasites of democracy. In a representative democracy such as ours, the corruption of political institutions reveals itself in the election of incompetent, ridiculous, and dangerous leaders. These societal symptoms do not indicate social imperfection but vulnerabilities in our way of life. The smell of rot clings to American democracy now. Mob rule begins not with the denial of civil prerogatives, but the abuse and dysfunction of traditional democratic institutions.

These complementary elements of flux and self-immolation combine to present a grim but familiar picture of America today. According to Polybius, democracy isn’t better than all other forms of government, though it’s better than most. It’s insufficient to curb the ravenous self-interest of the human beings who abide by its conditions. Democracy isn’t the panacea we Americans often claim.

Nor is democracy some final, perfect form of government. Democracies crumble, they abort themselves, they fail. Americans often fall into the habit of teleological thinking about democracy, as if human history were tending to the realization of some cherished dream of liberation.

Polybius described the Roman constitution, which he greatly admired, as combining elements of monarchy, aristocracy, and democracy. The founders of this nation sought the same balance in our rights and laws. Polybius witnessed the enervation of Roman republican government even as the Imperium of the Roman state grew to encompass virtually the entire known world.

We don’t have to subscribe to the theory of anacyclosis to recognize the perils predicted by Polybius in our own era. The unique challenges facing democratic governments today (cyber warfare, ratings-driven media, etc.) merely exacerbate the hazards implicit in democracy itself. As Polybius explains, exploitation, venality, mistrust, intimidation, and violence threaten democracy from within. The vulnerabilities underlying a dangerous American hysteria cannot be protected through democratic institutions, as these institutions merely provide a terminal for manipulators to shape public opinion and policy.

Polybius presents a rationalistic theory of history rooted in a realistic view of human behavior. His analysis of historical change and the constitutional symmetry of a democracy and its shadow offers an alternative framework for understanding the present direction of American politics. While I do not hold Polybius’ view of history, I value the insights his theory of anacyclosis affords us. He forces us to confront the inherent dangers of democratic government and the stakes of politics as it is practiced in America today.