Homing in on Constantinople, Hating the Latvians 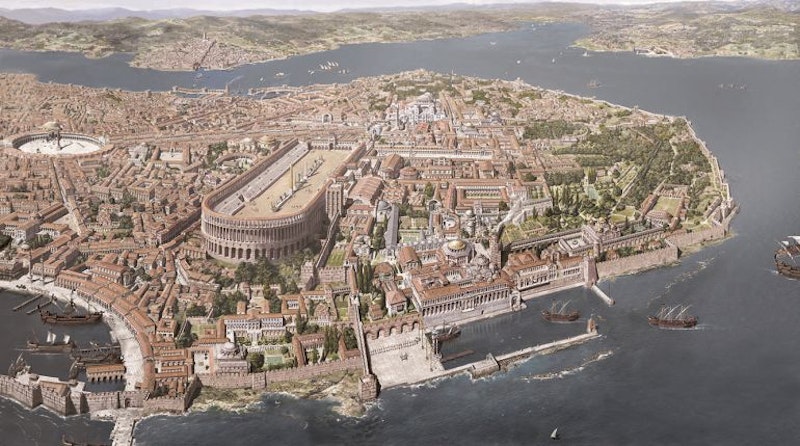 I write this on my laptop from International Airspace over the North Atlantic, as my Indiana church group homes in on CONSTANTINOPLE—latterly Istanbul, of course, but to us Russian Orthodox the fountainhead of our ancient faith most venerable!

Like all trans-Atlantic jaunts in this era in which Israeli-inspired airport security protocols conspire to harass the honest citizen and strip him of his dignity, the trip has been even more tiring than it needed to be. Still, it’s had its pleasures. For one thing, even in middle age I’m unable to shake the giddy excitement (felt as a tingle that mostly restricts itself to my loins, but that irradiates backwards towards the precincts of the sphincter) that comes as I “hot-foot it out on the open road,” to quote an old Hoosier expression.

Then, too, the proximity that long-distance travel entails brings one closer to one’s companions. Forced together into cabs, buses, airplane cabins, and even bathroom stalls (more on the latter in my next diary installment), we lose those inhibitions that, while they serve us well in day-to-day life, prevent us from achieving a franker, more profound level of intercourse.

To my point, yesterday’s ride in a hired minibus to the Indianapolis airport gave me the pleasure of speaking in depth with Lyuba Grigorievna, the Baltic Russian matron who recently relocated to an Indiana community not far from mine. If I understand correctly, Lyuba Grigorievna received a green card on the basis of the Indiana residency of her daughter who, she explained, had married a much-older Indiana husband whom she met via an online marriage broker headquartered in Minsk.

“She lives to torture him,” Lyuba Grigorievna said in her broken English, and with a leer of what might have been approval. I admit to having been taken back by Lyuba Grigorievna’s attitude. I’d like to give my fellow parishioner’s daughter—not to mention Russian virtue—the benefit of the doubt, and I share the typical Russian contempt for the “soulless American vulgarities” of lower Protestantism. But I couldn’t help spare a thought for my fellow aging Hoosier, trapped in a bad marriage with a Russian Jezebel of moxie and spirit.

Easier to take was Lyuba Grigorievna’s account of the situation in her native Riga, Latvia, to which her family had been transferred from Moscow by the Soviet authorities after the Great Patriotic War for the Fatherland, along with tens of thousands of other ethnic Russians.

Her account largely conformed with my understanding of the situation from reading the paleocon press.

Latvian fascists, she said (and indeed, she insisted, the vast majority of Latvians are fascists; in fact a full 98 to 99 percent are), were—in consort with the CIA, the NSA, MI6, the UN Human Rights Commission, Soros’ International Renaissance Foundation, and the Jews—conspiring to deprive Russian ethnics living in Latvia of their old privileges, granted them by God and the great Stalin. The Latvians were even going so far as to insist that Russians learn, and function in, the Latvian fascist tongue and cease their political efforts on behalf of the richly Kremlin-funded political parties that were nobly working to subvert the Nazi Latvian government and set the stage for, at some far-off but much-longed-for date, the Russian invasion and re-annexation of Latvia. This would of course be followed by the physical extermination of the Latvian intelligentsia, such as it was.

It was a fine thing to talk in depth with this typically pot-bellied and gold-toothed vision of aging Russian womanhood. I’m reminded of the old saying that “travel broadens.” Certainly the first leg of our long journey to HOLY CONSTANTINOPLE proved broadening to this flinty old Hoosier.

Next week: Father Nicodemus’ and my amusing shared experience in an Indianapolis airport bathroom stall for the handicapped!