The Un-Shunning of Louis CK

Women opinion writers sound the alarm, and then some. 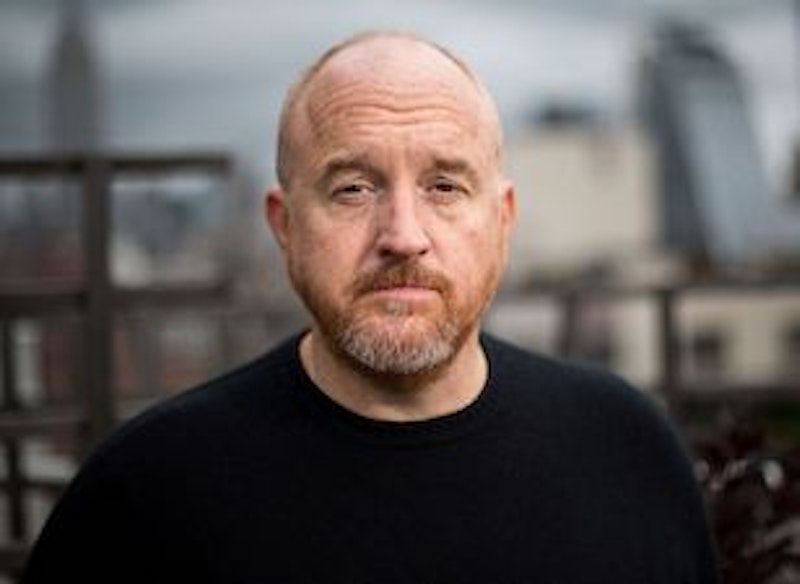 The anti-Louis pieces all sound like a diner found a dirty fork at her plate—no, a shit-stained fork, and then the waiter asked her if she didn’t think a fork had the right to lie horizontal on a table, and had she given any thought to procedures for cleaning the fork and what standards could determine its future acceptability. The woman erupts, and the resulting noise comes down to this: that thing shouldn’t be there. The thing is Louis CK, the masturbating victimizer of women, and “there” is the zone we assign those entities the public agrees to notice. With his recent visit to the Comedy Cellar, the disgraced comedian has wallowed back into that zone. He should get out as of now, or so goes the view of Rebecca Traister, Amanda Hess, Megan Garber, and Danielle Tcholakian, among other women commentators at high-end Web outlets (Hess at The New York Times, Traister at TheCut.com, and so on).

But the waiter doesn’t listen, the restaurant does nothing, and somehow there’s no city health department. The result is a string of opinion pieces that sound like speeches hatched in the middle of the insomniac night. Churning minds do bad things to words, logic, and verbal continence. Rebecca Traister flings: “That the men who are out there eating up ill-earned adulation and reveling in the notion that they’re possessed of talents”—deep breath—“superior to those who aren’t applauded tells me that”—swallow—“even if they’ve learned to reform their own behaviors—and by the way, the jury’s still out on that one—they haven’t learned a damn thing”—sit down, breath steadily—“about how they collected those masses of fans”—swallow again—“in the first place.” Megan Garber goes whirling by. “It is its own question, its own reply, its own blunt truth,” she calls. By “it,” she means “male desire, enabled desire, empowered desire.”

To follow these pieces sentence-by-sentence is to tour craters and inspect wreckage. Instead, try stepping back. Tilt your head and let a message emerge. Perhaps I read the noise incorrectly, but I take the writers’ underlying views to be this: Louis CK is getting un-shunned, and that means society isn’t going to protect women after all.

When #MeToo struck, we saw male celebrities get toppled because they’d done bad things to women. These bad things had always been tolerated. Now they weren’t and the men had to pay. Since the men were celebrities, payment meant loss of fame. If society looked in the direction of these men, society would curl its lip and look away. They’d be cut dead. They’d be non-persons with nowhere to go but obscurity, meaning retail work, volunteer work, or their living room. Amanda Hess, realist, plumps for that third option. “After all, we are only really capable of banishing them to one place, which is a very nice home where they can live out the rest of their days eating their money,” she writes. Once banished, they wouldn’t be spoken of. “When our greatest commodity is attention,” says Hess, going brainy, “one way to conceive of societal payment is for an abuser to simply refrain from calling attention to himself; to give us the time to not think of him at all.” To be erased, one might say.

Louis CK hasn’t been erased. As the women point out, he can walk on stage at a comedy club whenever he feels like it. He just did so and people were glad to see him. So what happened to #MeToo and society’s new leaf? And if that leaf hasn’t been turned, in what way are women safer now than they were before? If, as seems possible, they aren’t safer, how can they make society understand—all over again—that this level of safety is really not adequate and that therefore it’s outrageous, since their lives are being crimped by dangers that most men never face?

Or such is my read of Hess, etc. I hope I’ll be forgiven for pushing aside the written views of women to impose this summing up. My excuse is that the views in question barrel past considered thought. “I don’t know, nor am I inclined to guess at, what the proper penalty or restitution would be,” declares Traister, growing especially impatient. Or there’s Danielle Tcholakian wadding up Christian ethics: “This is very basic stuff. Do unto others, etc. It should not be a revelation.” The “basic stuff” is that sinners better jump through hoops before they’re forgiven, which seems a very hasty take on the Golden Rule.

The fork is unacceptable, that’s all. That’s what the women have to say. Yet there the fork is. The redolent, shit-stained Louis CK can step among humans and show his face like a person. He can do this whenever he feels like it (“His desire is exerted, apparently, on the owner of the club he performed at… it is exerted on the audience who happened to be in attendance,” fumes Garber, marveling that he stepped onto the stage of a small club). He can do it without mentioning his shame. (Parades! His set at the comedy club had a bit about parades!) This is an alarming state of affairs, yet less alarming than if the last few sentences were in the negative. Not the ones in parentheses, of course, but their companions. If you root for shame to devastate somebody, that’s an indication you’re approaching things wrong. Let’s hope Louis CK has been thinking about his misdeeds and their foulness. Let’s hope everyone does some thinking, because it’s needed.