The Election Process Has Shown Us What Mitt Is Made Of 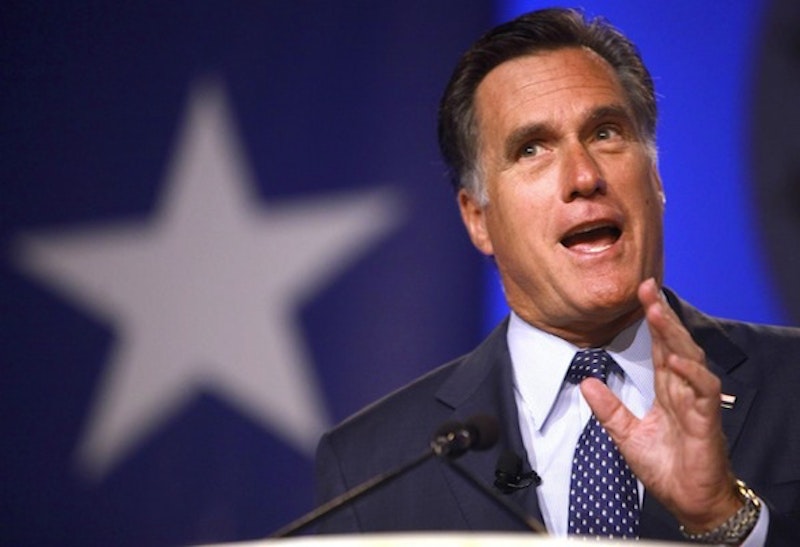 Admittedly, I was never going to vote Republican this election. There are a lot of things I don't like about Barack Obama, but most of them have to do with him being too conservative, not too liberal. If I could vote for someone who wasn't a war-mongering, civil-liberties stomping tool of the plutocracy, I would do so, but that’s not an option.

Still, there was a time not too long ago when I was able to contemplate a Mitt Romney presidency with only a mild amount of nausea. Compared to the phalanx of nattering crazies surrounding him (that would be Bachmann, Cain, Perry and Gingrich), Romney seemed distinguished by his relative ability to keep his spittle in his mouth. Even his transparent insincerity seemed like a plus. As a liberal, it's at least mildly comforting to know that the candidate doesn't believe a word of the anti-immigrant, pro-life, neocon bullshit he's spewing. I figured if he won the general election he'd cravenly tack to the center, which would be fine. The thing about someone who will pander to everyone is that you figure that eventually he'll get around to pandering to you.

I even tried to vote for Romney in the Illinois primary, but was defeated by the fact that he is so personally, viscerally loathsome that I couldn't bring myself to pull the lever. Even though I was too morally weak for the task, I thought the principle was sound. Given the Republican field (and the utter impossibility of Ron Paul winning), Romney was the guy. I would hate having to stare at the man's oleaginous mug for four years, but in practical terms, I figured he would be an awful but not necessarily catastrophic President.

Recent events, though, have made me wonder. Initially, I thought (as I said here) that a vote for Mitt was a vote for "bland competence and ideological wishy-washiness." I still believe in the wishy-washiness, but the competence part has come into serious question. Especially on foreign policy.

I never really gave much thought to Mitt's foreign policy experience, or lack thereof. It didn't necessarily seem like something that he was all that interested in; I figured he'd bluster a little, hire decent advisors, and end up pretty much maintaining the status quo. Again, not good, but not George W. Bush level apocalyptic idiocy.

But I've been forced to reassess. I still don't think Mitt actually cares much about foreign policy, but not caring seems more dangerous than I'd originally considered. As a candidate, his gaffe-filled foreign tour—in which he alienated key allies while simultaneously stepping in dog turds—was a harmless joke. But if he were to actually become the leader of the free world, his apparent inability to parse even the basic rudiments of diplomacy bodes ill. Not gratuitously insulting Britain is an easy part of being President. What happens when there's an actual crisis?

We sort of found out this week what happens when there's an actual crisis, and it wasn't pretty. Faced with a volatile situation in which American lives were potentially at stake and information was scarce, Mitt Romney blundered forward, so eager to pretend that Obama was Carter that he got everything possible wrong.

Again, because Romney's not actually in a position of power at the moment, there were few practical results, but what if he was President and did this sort of thing? It's not too hard to imagine him getting someone killed, or even starting an unnecessary war. Like everybody else in the country, I tend to find the presidential campaigns hopelessly extended, banal, and discouraging. But in this case, the system seems to have worked. Romney's foreign policy weaknesses, not particularly apparent before, have been ruthlessly exposed. It's hard to say whether that'll actually affect the vote all that much. Most people have already made up their mind at this point, and it's not like the Republican Party is going to abandon Romney at this stage, as they might well have if he'd pulled this nonsense in the primary. But at least we've got a better idea of what we're getting into. If he wins, I'll know not just to despair, but also to fear.