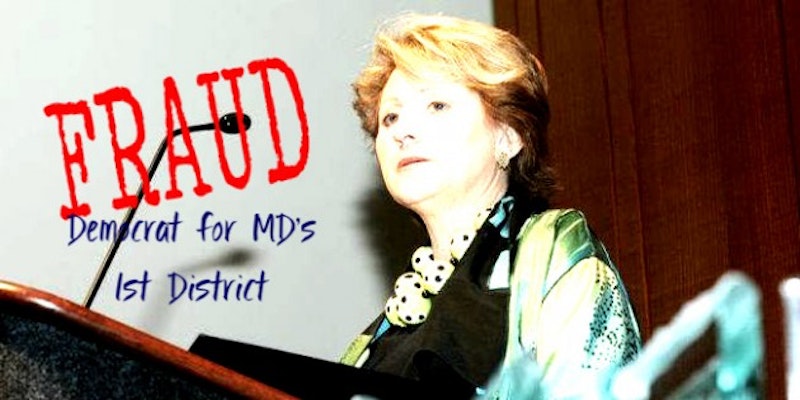 Maryland’s First Congressional District is a lurid trail of haunting images. That Democratic candidate Wendy Rosen got caught double-dipping in the voting booth is only the latest in the tortuous history of one of the most conservative areas in the nation. The story line also touches on one of the most sensitive issues in the country, allegations of voter fraud and attempts in Republican-controlled states to suppress voter turnout.

Rosen, a Cockeysville businesswoman, was forced out of the Congressional race by Democratic party officials after it was discovered, on a tip, that she had voted twice in elections since at least 2006 in both Maryland and Florida, according to reports. Rosen was nabbed after a search of a multi-state data base that Maryland joined this year as a way of red-flagging voters who are registered in two places. The First Congressional District, now represented by Republican Andy Harris, includes the nine Eastern Shore Counties and patches of Harford, Carroll and Baltimore Counties.

Before Rosen, there were other peccadilloes in addition to years of race riots that brought notoriety to the largely rural Shore counties that make up the bulk of the district’s land mass but comprises only about half of its population. In October, 1962, Democratic Rep. Tom Johnson was indicted in the first major savings and loan scandal three days after President John F. Kennedy endorsed him, along with other state Democrats, at a party rally at the Fifth Regiment Armory in Baltimore. At the time, the White House denied that Kennedy had advance notice that Johnson would be indicted by the Justice Department, then under the control of the president’s brother, Attorney General Robert F. Kennedy.

The seat then went to Republican Rogers C. B. Morton, brother of GOP National Committee Chairman Thruston B. Morton, who represented the district until he was appointed secretary of the interior by Richard M. Nixon, following the 1968 presidential election. Morton was succeeded in Congress by his administrative assistant, William Mills, who became embroiled in a fund-raising scandal and then put a shotgun to his head and took his own life.

Mills was followed to Congress by Republican Robert Bauman, a righteous conservative member of the Maryland Senate before such a thing was fashionable. Bauman, after several years of service, was arrested in a District of Columbia men’s room where he was caught soliciting sex from a teenage boy. Bauman, married and a father, admitted his homosexuality as well as a drinking problem.

The seat next went to Sen. Roy Dyson (D-St. Mary’s-Calvert) who defeated Bauman in 1980. Dyson later lost the Congressional seat after his administrative assistant committed suicide in a plunge from a New York hotel window. The First District seat reverted back to Republicans when it was captured by a moderate and environmentalist, Wayne Gilchrest, who served in Congress for 18 years until Republican Gov. Robert L. Ehrlich Jr. helped defeat Gilchrest for speaking out against the Governor’s plan to legalize slot machines.

Frank Kratovil, a Democrat, defeated Gilchrest, and Kratovil, in turn was defeated by Harris. Harris’ seat appears safe as Democrats now scramble to salvage the campaign with a write-in candidate. Rosen’s name will remain on the locked-up ballot and the write-in Democrat is John LaFerla, a 63-year-old Chestertown physician and party activist who had been favored in the primary election but lost to Rosen by 57 votes.

The Eastern Shore’s other distinction revolved around race, specifically public accommodations and voting rights. For nearly two years, in the early 1960s, the Maryland National Guard occupied Cambridge where nightly demonstrations were dispersed with tear gas. Alabama Gov. George C. Wallace launched his campaign for president in Cambridge and Sam Setta’s Wishing Well Motel in Easton became the Shore’s segregationist headquarters with Setta himself once running for Congress as a Wallace protégé.

Rosen is not the kind of voter Republicans had in mind when they set out to establish a devious scheme of strict voter ID laws in states they control. Those they were targeting were minorities, the poor, elderly and young—voters least likely to have government-issued photo IDs such as a driver’s license or a passport. And, in fact, it was Democratic officials who picked up Rosen’s dual registration even though Republicans are licking their chops over Rosen’s oversight or stupidity.

Republicans’ claims of widespread voter fraud are based more on politics than evidence. A massive study of voting records and patterns was conducted by President George W. Bush’s Justice Department. It uncovered only eight cases of outright voter fraud. Florida has been the center of much of the agitation about voter fraud. The GOP governor, Rick Scott, and other officials had claimed that there were thousands of illegally registered voters in the state. Many local election board officials disagreed and several refused to purge voter rolls. Samplings, however, revealed only a few violations and the governor backed down after threats from the Justice Department.

In some cases, GOP-controlled states have gone beyond voter ID laws in an apparent attempt to tamp down the vote. Ohio, for example, tried to cancel early voting in the state but was rebuffed by the courts when it was disclosed that nearly 50 percent of early voters in 2008 were minorities, a group most likely to be Democrats.

The Texas voter ID law has been suspended by a panel of federal judges as being to burdensome on poor and minority votes. Similar action is pending in South Carolina. Pennsylvania’s Supreme Court heard arguments last week that the state’s new voter ID law undermines the state constitution’s guarantee of voting rights. In Pennsylvania, a key battleground state, the legislature’s House majority leader, Mike Turzai, boasted that the voter ID law would mean certain victory in the state for Mitt Romney in November. An estimated 750,000 voters would be affected if Pennsylvania’s new law stands. (Maryland has no photo ID requirement but does have early voting which has not boosted the turnout measurably.)

Rosen is the latest casualty in the star-crossed First Congressional District. Like many of those before her, Rosen was brought down by her own brazen negligence. But in many Republican-controlled states, those who are being denied the right to vote are innocent victims of lawless politics disguised as beneficial laws.