The GOP candidate is right about the Mideast, and shouldn’t shy away from Obama criticism. 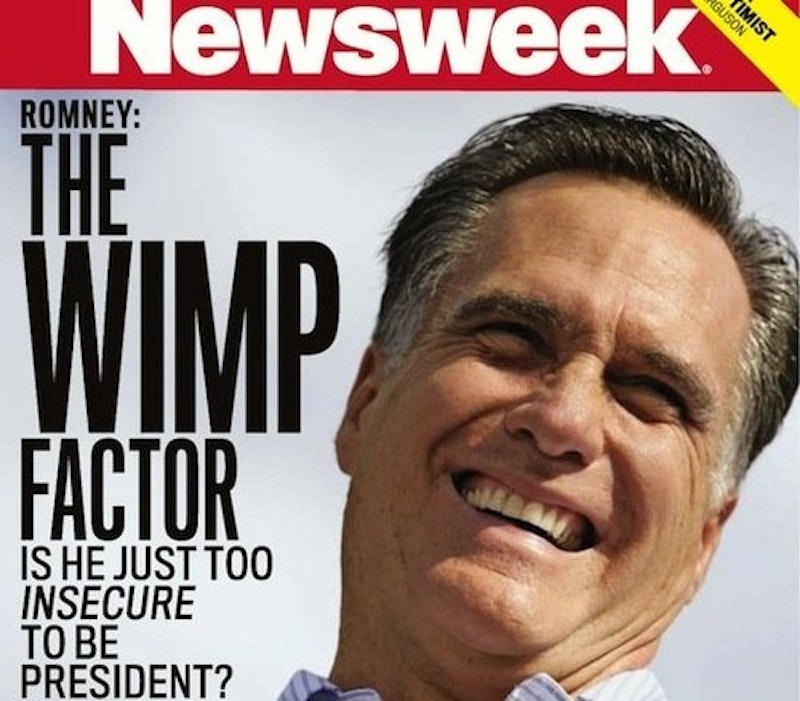 Mitt Romney, unfathomably, is still unaware that as a Republican presidential candidate he’ll never get a fair shake from 90 percent of the media. It’s a fact of life for GOP pols and the sooner Romney becomes more aggressive in this campaign, understanding that by and large the electorate has diminishing respect for the self-appointed Beltway cognoscenti, the better his chances are of defeating a feckless Barack Obama on Nov. 6.

It’s hard to believe now, but George W. Bush—a far superior politician than Romney—received better notices in the media in his two presidential campaigns. One reason is that reporters, despite their political leanings, actually liked Bush; no one, even his supporters, has warmed up to Romney. Two, Bush’s opponents, Al Gore and John Kerry, never connected to their media base: Gore with his earth tones, condescension and unspoken moral castigation of Bill Clinton, came off as a prig; Kerry, the windsurfer who could’ve cut a commercial for Dijon mustard, was privately held in ridicule as a “kept man,” an aristocrat living off his flinty wife’s fortune.

But Obama’s nothing like Gore or Kerry. Yes, he’s seen as aloof, but the man’s still a cool dude. Why else would Michael Lewis, the excellent author and Vanity Fair reporter, sacrifice his dignity (and integrity) by giving Obama a rim job in the current issue of that magazine, even allowing the White House to vet the quotes in the long buddy profile?

So, what’s Romney to do, especially after the media’s mass condemnation of his comments following the attacks on U.S. embassies in Benghazi and Cairo earlier this week? (The eruption of violence and anti-American hatred continues—Yemen, Tunisia, Sudan, London—as I write, with no end in sight.) Hit harder on the ongoing turbulence, and criticize Obama for playing hide and seek on the issue. Domestically, Romney’s blown the chance to speak about the teachers’ union strike in Chicago: the smart play would be to have the media’s boogeyman, Wisconsin’s Gov. Scott Walker by his side and condemn that union for leaving Chicago’s public school kids out in the cold. Never mind that Romney will never win the votes of the dwindling union members, he could advocate replacing those striking teachers with young and unemployed college graduates, proposing a decent salary in exchange for a three-year commitment. The lines would be around the block.

It was left to The Wall Street Journal on Thursday to put the true nature of the media’s Romney condemnation into perspective. The editorial concluded: “Throughout his candidacy, Mr. Romney has supported the necessity of America’s global leadership, sometimes against the wishes of Republican voters. His comments this week are consistent with that worldview, which is also consistent with that of every recent conservative President. His political faux pas was to offend a pundit class that wants to cede the foreign debate to Mr. Obama without thinking seriously about the trouble for America that is building in the world.”

Just a sampling from The New York Times this week demonstrates the “offense” against the “pundit class,” as the Journal suggests.

Timothy Egan (9/13): “Romney’s craven attack [on Obama] was fundamentally dishonest, riddled with errors, and premised on notions that a kook would harbor. His response was no more accurate than [the anti-Islamic film]… Romney was left sputtering in the gutter with the dredges of his party.”

Gail Collins, a Times op-ed columnist who’s poked Romney for this or that offense for over a year now, weighed in on Sept. 12: “It didn’t seem to be a lot to ask, but when the crisis in the Middle East flared up, Romney turned out to have no restraining inner core. All the uneasy feelings you got when he went to London and dissed the Olympic organizers can now come into full bloom. Feel free to worry about anything. That he’d declare war on Malta.”

Romney could make the mistake of wearing a clashing tie and shirt combo and Collins would find that a reason for his disqualification as president.

Oh, and of course Paul Krugman (9/12): “[N]ow Romney has really ensured that everyone in the news media, the GOP propaganda organs aside, is going to view him with distaste and alarm—as well they should. Romney could still win, but he has just made it harder for anyone to consider him suitable for the job.”

Amazingly, here’s what Romney may or may not realize: Democratic enablers like Krugman, Collin or Egan have continually denigrated his candidacy and that won’t change. The media is not his constituency. Presumably, Romney—unlike John McCain and Bob Dole—really wants to win the election: to make that happen, he has to speak out forcefully every day, on domestic and international issues, and ignore the vitriol.