Election Polls Mean Little Until After the First Debate

Peggy Noonan cuts to the crux of Obama vs. Romney. 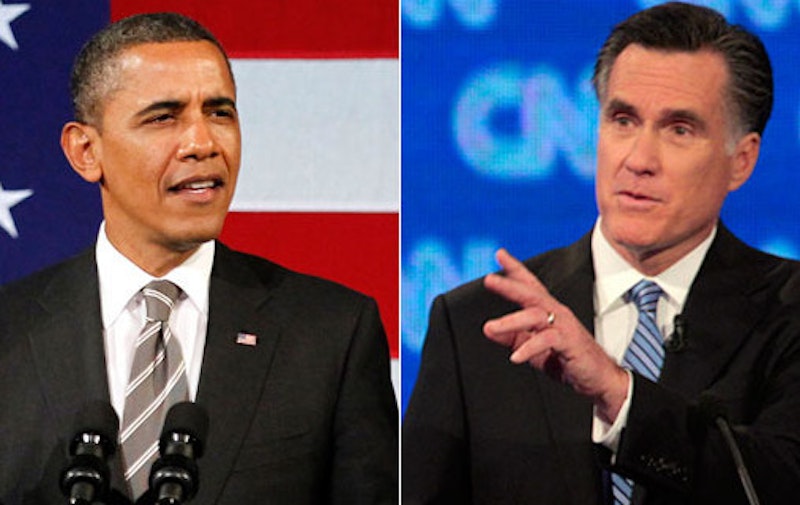 As an active observer of the 2012 presidential election who didn’t watch a single minute of either the Democratic or Republican Conventions (watching a Houston Astros game held far more interest), I read Peggy Noonan’s Wall Street Journal column today—“Everyone Will Watch the Debates”—with as much enthusiasm as one can muster in this never-ending campaign. It was a welcome tonic from the thousands of stories and tweets about that bounce, bounce, bounce Barack Obama received last week, the bleats of glee from the President’s unabashed media supporters and the mostly unnamed GOP sources who’ve told eager reporters than Mitt Romney’s already blown it.

I think Noonan’s a bit optimistic when she writes: “Convention viewership may have been down, but almost every voter who can, will watch at least some of the debates,” which gives far too much credibility to the anachronistic idea of “civic responsibility” among the electorate. Still, because the debates are less scripted than the conventions, with the tantalizing possibility that one of the candidates will make a Jerry Ford-like gaffe (I’m discounting the Biden/Ryan session on Oct. 11, which will be viewed more as a sitcom), ratings will be high, particularly for the first match-up on Oct. 3, just two days before the final jobs report before the election is released. It could be that after the second debate—Oct. 16—that the aggregation of polls could actually point to the eventual winner.

Noonan echoes the long and mostly interesting Atlantic article by James Fallows (his quadrennial exercise) that, boiling it down, said Obama’s not terrific at debates and that Romney, unless caught off-guard by an unanticipated question (fairly likely) is quite good. Noonan: “[Obama] won the election in 2008, so people think, retrospectively, that he was great at debate. But he wasn’t, he just never lost an inch to John McCain and seemed steadier, less scattered. But he never said anything interesting.”

Perhaps out of respect to McCain, Noonan—while completely accurate about Obama’s uninteresting performances—doesn’t mention that even had the bumbling Senator not been an untethered candidate, weighed down by Republican fatigue, Sarah Palin and his own incompetence, the election was all but over when Lehman Brothers went down on Sept. 15 of 2008, the penultimate signal, for those who didn’t already realize it, that the nation’s economy was in a state of collapse. On Election Day four years ago, I spent most of the day in Manhattan’s financial district and the people I spoke to, predominantly Republicans, were far too preoccupied with matters more important than the election. The view was: well, who knows, I’ll take a flyer on Obama, he certainly can’t screw things up worse. And then it was back to the phones and wondering aloud how the markets had turned into a Las Vegas casino.

But Noonan hits paydirt in her conclusion, refuting the—pardon the cliché—conventional wisdom that Obama’s “likability” will ensure his reelection, despite the crippling unemployment numbers. I’m a Romney supporter—although like so many others, I think he’s the definition of a mediocre candidate—but what’s not to like about Obama? He’d probably be fun to hang out with, talk sports, politics, shoot the shit.

Noonan: “America is in a crisis. It needs to get out of it, shake it off, move forward. America needs leadership. What Mitt Romney has to show is command, talent, resolve… Americans don’t really want someone they’d like to go out and have a beer with, they want someone who can help them afford a beer.”

And that, despite current polls, is the Big If in this campaign. The economy’s still in the sewer and if Romney, during the three debates with Obama, can convince just a relatively small percentage of voters that he’ll get the country out of the present Jimmy Carter-like “malaise,” he’ll win. Conversely, if he doesn’t offer a compelling alternative to Obama’s frightening economic policies, he loses.