Mitt Romney: the Gift that Keeps on Giving. 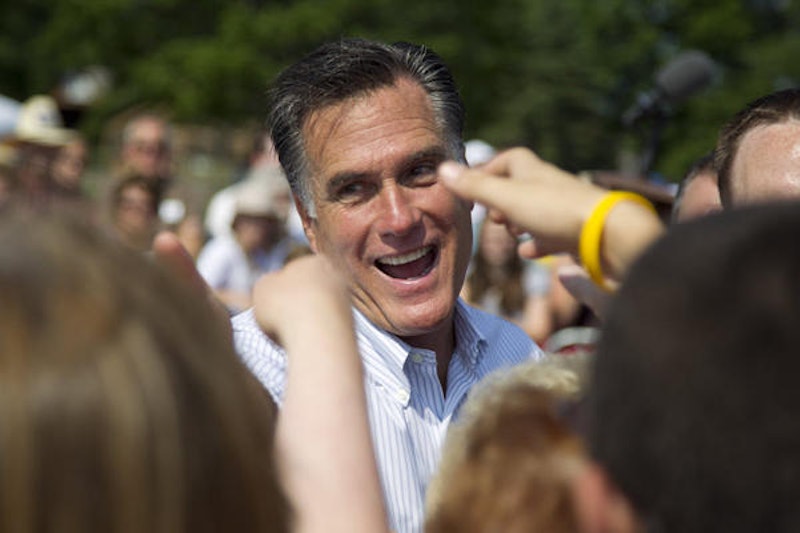 October 3: In the closing statement of the first presidential debate, Mitt Romney begins strong, elucidating a surprisingly progressive vision of national peace and prosperity under a Romney administration, but eventually winds down with a long, rambling story about his remote Swiss chalet that concludes with a tremulous, fist-pumping insistence that by 2016, every American’s remote Swiss chalet will be as opulent and well-stocked with caviar as Romney’s is.

October 10: At a town hall meeting in Tulsa, Oklahoma, an underemployed steel worker shares the sad story of his family’s misfortunes since the economy cratered in 2008: the unceremonious layoff, the desperate struggle to hold onto their home, reduced to sleeping in a station wagon. Mitt Romney listens thoughtfully, then launches a into a mocking, scabrous cover of “Nobody Knows The Trouble I’ve Seen.”

October 11: At a campaign rally in Chicago, Mitt Romney accidently addresses the assembled as “my valued employees,” plays it off legit.

October 19: In an impromptu, unscripted moment of spontaneity, Mitt Romney randomly begins to breakdance during his guest appearance on Katie, whereupon the sympathetic-to-a-fault Katie Couric solicitously joins in, and then ultimately everyone—technicians, directors, control room people, caterers, and the audience—is breakdancing awkwardly live before a stunned, aghast America.

October 25: Mitt Romney tweets a photograph of himself aboard a new schooner, alongside a caption reading “SWAG SWAG SWAG.”

October 26: As a good-will, crowdsourcing gesture, the Romney/Ryan campaign manufactures and retails 5000 “commemorative Barack Obama Kenyan birth certificates” at a price of $2500 each via www.mittromney.com.

October 29: During a photo opportunity with supporters in Des Moines, a “high five” between Mitt Romney and a mentally disabled volunteer goes horribly awry, with Romney inadvertently smacking the volunteer’s glasses across the room.

October 31: Halloween is just another long, grueling day on the campaign trail for Mitt Romney—glad-handling donors, stiffly endorsing GOP congressional candidates, dodging even the most innocuous of interview questions—except that he’s doing all of these things while wearing a garish, badly-constructed Ronald Reagan mask that he never removes, even at lunchtime.