The Republican presidential ticket is still a blank slate. 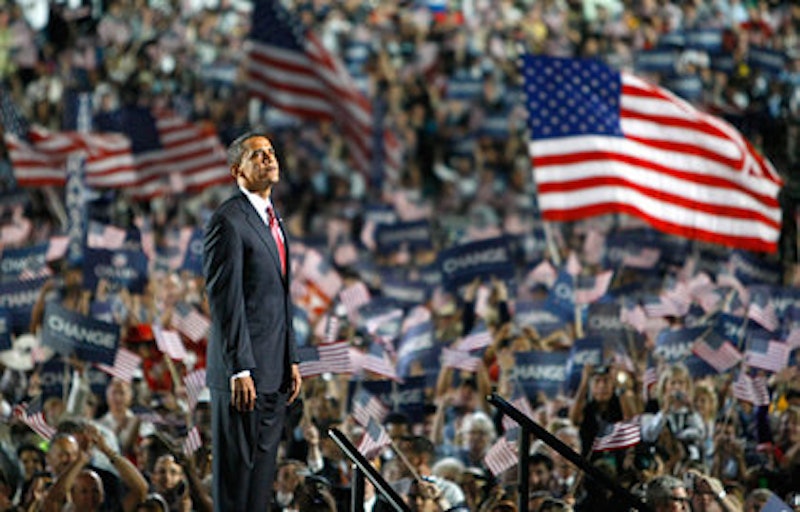 Both political parties left their conventions with one eye on 2012 and the other on 2016, exhibiting deep benches and promising reserves of young talent. The line of succession matters less to Democrats if President Obama wins reelection because the seat will be open in 2016. But if Mitt Romney captures the White House, several Republican careers could be set back as much as eight years. The conventions were festivals of the future.

But no matter which party brings home the pork chop, there is another more brooding concern hanging over the White House: The next president will get to appoint as many as three Supreme Court justices over the length of the next four-year term. Conservatives are itching for a crack at Roe v. Wade just as liberals are salivating for a shot at Citizens United.

That aside, it was the youthful exuberance and the fresh faces as well as the seasoned wisdom of the parties’ elder statesmen—virtually all but the candidates’ wives and one ex-president who are the future of both parties—who roused the delegates in the halls and mesmerized television’s vast audiences as rarely happens in politics. Conventions these days are no longer about nominating presidential candidates but about rallying the parties to their causes. But as much as anything else, they provide auditions and primetime showcases for future candidates and leaders of the parties. This year, participants and viewers alike got the full treatment and maximum exposure.

For Democrats, the trophy, without question, goes to Michelle Obama. Her delivery sparkled. Her story was profound and touching. The money line of her speech was: “I have seen first hand that being president doesn’t change who you are—it reveals who you are.” It goes straight to the heart of character and conviction. Were you listening, Mitt Romney?

Maryland Gov. Martin O’Malley had a bad week. First came his observation on national TV that no, America is not better off than it was four years ago. Then came his convention speech, his second under par performance at the rostrum. No disrespect intended toward the homeboy, but O’Malley simply didn’t cut the mustard as he was expected to in his primetime slot. O’Malley’s remarks seemed more manufactured than delivered. And being sandwiched between Massachusetts Gov. Deval Patrick and San Antonio Mayor Julian Castro, two of the Democratic convention’s standout speakers, didn’t help O’Malley’s calculated climb to the top of the heap. Michelle Obama was the cropper. By the end of the evening, O’Malley was a forgotten man and his ability to deliver the killer speech to match his national ambition is now in question. Based on his speech, O’Malley is not ready for the big show.

Among the other Democrats who advanced their standing and recognition were Elizabeth Warren, Senate candidate from Massachusetts; Cory Booker, Mayor of Newark; Rahm Emanuel, mayor of Chicago; Vice President Joe Biden; Kamala Harris, attorney general of California; and Andrew Cuomo, who was in the hall but didn’t speak. And add to the futures list the name of former Michigan Gov. Jennifer Granholm. They’re all now part of the futures buzz.

Even the stoic and stolid John Kerry rose to the occasion with a rousing speech that brought him a measure of redemption from the swift-boat savaging in 2004 over his war record. He scolded Romney and his running-mate, Paul Ryan, for not a single mention at the GOP convention of America’s fighting men at home and abroad. Kerry, rumored to be the next secretary of state, gave Republicans a stern lecture on foreign policy, Romney’s most vulnerable area and Obama’s greatest successes.

The person who probably got the biggest lift, though, was Hillary Clinton, who was nowhere to be found in Charlotte but was 10,000 miles away in China when her husband Bill spoke. There was speculation that Clinton’s masterful speech was more about Hillary for president in 2016 than Obama in 2012. The nomination is hers if she wants it despite all of the other candidates in waiting. If Hillary doesn’t run in 2016, the Democratic race is wide open. Bill Clinton’s speech, in one joyous bundle, was, by turns, a tutorial on government, an exquisite campaign how-to manual for Obama and a detailed roadmap to the future.

Obama’s speeches rank among the best ever delivered at Democratic political conventions. His speech in 2004 brought him national attention. His hope and change acceptance speech in 2008 aroused the nation with its soaring rhetoric and summer of promise. His acceptance speech last week didn’t disappoint, though it was not his usual soaring rhetoric. Instead, Obama chose to turn the incumbency to his advantage with a recitation of his accomplishments and to focus on the obligations of government as well as the potential of governance and to outline “a better path forward.”

As the warm-up before Sinatra, Joe Biden was, well, Joe Biden, a stumble here, a fumble there, but nonetheless a solid speech that reached out to the lunch-pail and the K-Mart crowds and roared with his signature bumper-sticker summary of the Obama Administration’s four years in office: “Osama bin Laden is dead, and General Motors is alive.”

By any objective measure, and there have been many, there is no way the GOP convention can match the Democrats for sheer oratorical splendor and precise messaging that resonated with key demographic groups. The convention was a seamless, spectacular production. The visuals matched the splendid oratory. By contrast to Obama’s speech, an unusual and calculated shift to specifics for an acceptance speech, Romney’s remarks were serviceable and generic, less personal and revealing than that of his wife, Ann, who was assigned to tidy up questions about her husband’s cardboard cut-out persona. Romney, as well as Ryan, prefer to remain blank slates than offer detailed prescriptions to solve what ails America.

The enthusiasm level in Tampa was far short of that in the Democratic hall. (To be fair, Democrats have twice the number of delegates and alternates as Republicans.) Nor was the GOP’s white-bread tableaux any match for the ethnic mosaic in Charlotte—blacks, whites, Hispanics, Muslins in burkas and Sikhs in Technicolor turbans. The job of rousing the crowd was left to vice presidential nominee, Ryan, Sen. Marco Rubio and Gov. Chris Christie of New Jersey.

Ryan’s speech was shredded to bits within minutes after its delivery, widely criticized for its factual defects and misrepresentations. Christie’s speech was savaged for being more about himself than Romney. Rubio, though, brought the crowd to its feet with his immigrant’s son’s tale and is now, as he was before, the ethnic wonder-boy of the GOP and high on everyone’s list of future national candidates.

Other Republicans lined up and waiting behind Romney if he falters include: Jeb Bush, son and brother of two former presidents; Susana Martinez, governor of New Mexico; Rob Portman, former budget director; and a cast of others, including Gov. Bob McDonnell of Virginia, Gov. Mitch Daniels of Indiana, former Secretary of State Condoleezza Rice, and the button-man of the right flank, Rick Santorum.

Both conventions placed heavy emphasis on appealing to Hispanics, illustrating the growing importance of that bloc’s vote, although it is by no means a monolith. At the GOP convention, virtually every major speaker was introduced by an Hispanic. There are now 55 million Hispanics of different derivation in America, the majority of them from Mexico. In 2008, Obama won 70 percent of the Hispanic vote. The Cuban population in Florida, of which Rubio is a native son, votes overwhelmingly Republican. Already there is speculative talk about an eventual Castro-Rubio match-up.

Demographics are destiny. The Republican convention was built around the minutiae of government and supply-side economics as well as the deconstruction of the four years of the Obama Administration. By contrast, the emphasis at the Democratic gathering was on social issues which are near and dear to the party’s base, especially gay marriage, reproductive rights and now, patriotism, an issue that Democrats have somehow plucked from traditional Republican ownership. A parade of women, including the outspoken law school graduate, Sandra Fluke, who was shut out of GOP Congressional hearings, advanced the case for a woman’s freedom to choose.