It's only bad when Trump supporters do it. 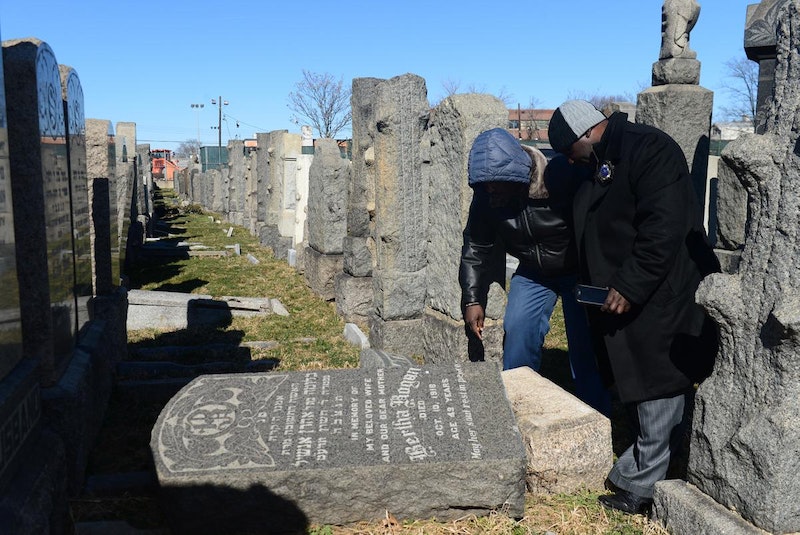 FBI data supports the Democrats’ contention that there's been an uptick in hate crimes since Donald Trump's took office, despite the distraction of the recent Jussie Smollett hoax. In 2017, violence targeted at black, gay, trans, Muslim, Jewish, and other people (even some whites) was up 17 percent. The media got duped by the Smollett story because the violence was allegedly both anti-gay and anti-black, but imagine if the actor/singer had been Jewish and claimed supporters of rookie Congresswoman and accused anti-Semite, Ilhan Omar, had doused him with bleach and screamed, “It’s all about the Benjamins!” while assaulting him on that Chicago evening. Does anyone doubt the media would’ve been skeptical about such an outrageous claim right from the beginning?

The difference isn't just that Omar’s a Democrat. Anti-Semitic violence isn't a media priority these days, like the Islamophobic variety is, despite the fact that in 2017 crimes targeting Jews were up 37 percent. Few regular consumers of liberal media would guess that Islamophobic attacks in the same year were down 11 percent. This data point runs counter to the narrative that Trump’s responsible for the hate crime bump, so it doesn't make its way into the coverage.

Jews, viewed as successful whites, are way down on the intersectionality ladder, and awarded no victimhood points. They're even considered oppressors. Had Islamophobic violence jumped 37 percent in 2017, the Democrats and media wouldn't let you forget about it.

A look at how the Democrats’ relationship with Israel has evolved provides context for understanding why the Party’s developed an anti-Semitism problem. Democratic president Harry Truman welcomed the new Jewish state when it was founded after WWII. Democrats at the time felt an affinity for Israel, while Republicans were skeptical of the socialistic kibbutzim and concerned about possible oil supply interruptions.

The GOP eventually warmed up to the new nation. After incidents like the daring Operation Entebbe, a successful counter-terrorist rescue mission executed by Israeli Defense Forces in Uganda in 1976, Republicans viewed Israel as a friendly, democratic nation with a fierce military located in a strategic region. Another factor was the rise of Evangelical Christians within the Party, and their belief that the Jews are the rightful inheritors of the land Israel sits upon.

Things began to change for the Democrats in the early 2000s with the elections in Israel of right-wingers like Ariel Sharon and Benjamin Netanyahu, who pushed expansionist policies. Israel looked less like a safe-haven for the Jewish people and more an aggressor. After Obama was elected, he criticized the Israeli settlements that went beyond the original 1948 borders. His coalition included many who sympathize with the Palestinians’ cause. On the 2016 campaign trail, Bernie Sanders openly criticized some of Israel's aggressions. The Republicans gave unqualified support to Israel.

As Democrats distanced themselves from Israel, they began to pay less attention to anti-Semitism within their own ranks. The Women's March, ostensibly designed to unite all women (except Republican women), was damaged by charges of anti-Semitism. Newly-elected Democratic Congressional representatives Rashida Tlaib and Ilhan Omar, who support boycotting, sanctioning and divesting from Israel—BDS—have both been accused of making anti-Semitic remarks for saying things in public that they've been saying for years. As the Democratic Party continues to move left, its anti-Semitism problem grows.

Anti-Semitic violence exists in two forms—from the left and from the right. The media and progressives are interested only in the latter, as in the Pittsburgh synagogue massacre last year. That's why, if you’re a Democrat, you'd probably be surprised to learn that, of the 1,749 victims of anti-religious hate crimes in 2017, 58 percent were motivated by anti-Jewish bias, while 18 percent reflected an anti-Muslim bias. It's even more dangerous for Jews in Europe, a situation that's partially tied to immigration policies. A secret on the Left is the blatant anti-Semitism in Middle Eastern countries that’s exported via immigration. In a shocking development, anti-Semitic acts in France increased by 69 percent in the first nine months of 2018, something that can't be attributed to having a Trump-like figure as the nation's leader. According to the Jewish Agency for Israel, 55,000 French Jews have left the country since the year 2000.

The Democrats went through changes, which has produced such historical artifacts as the photo of Bill Clinton sharing the stage with rabid anti-Semite Louis Farrakhan at Aretha Franklin's funeral. A progressive icon, author Alice Walker, praised another Jew-hater, David Icke, in the pages of The New York Times and she remains in the fold instead of compared to David Duke. Al Sharpton, who helped to incite a riot against Jews in 1991 in the Crown Heights section of Brooklyn, now hosts his own MSNBC show.

In a sense, the anti-Semitism that's become ingrained in the Democratic Party is a function of its coalition. According to an Anti-Defamation league survey, less than five percent of whites, Asians and “others” hold anti-Semitic views, compared to over 15 percent of African-Americans and 29 percent of Latinos. Those numbers don't take into consideration any reticence people might have for expressing such feelings to pollsters.

Due to the theory of intersectionality that Democrats have embraced, minorities are allowed to express their distaste for Jews, who are above them on the success ladder and therefore deserve scorn. Only right-wing anti-Semitism is unacceptable to the Democrats. The media will tell you that anti-Semitism is the product of Trumpian nativism, but that's only part of the story.