Exploiting children for fun and profit. 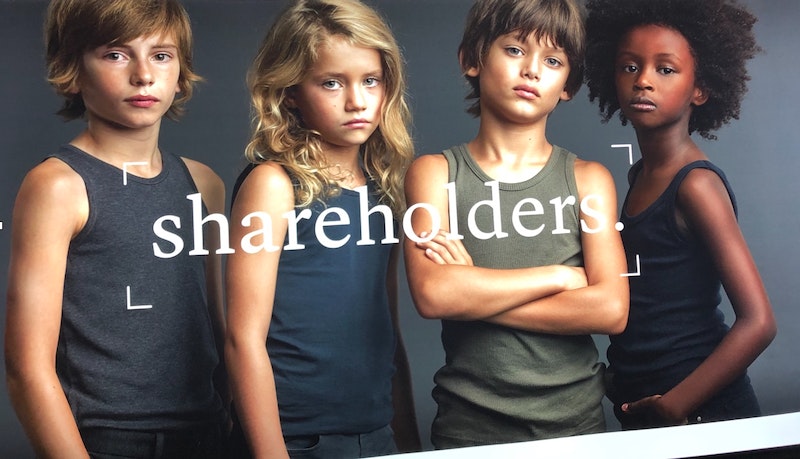 At London’s Heathrow airport, the billboard for Lombard Odier, a Swiss Private bank focused on adopting a “sustainable strategy for investing" is a bizarre fixture. The advertisement depicts four children of various genders and ethnicities. “Shareholders,” it calls them.

As many of us know, the Left is not against capitalism when they’re running the show. In fact, leftists are willing to exploit children and race in order to claw themselves up to the top. The Lombard Odier billboard shows emancipated children straight out of a film like Kids or Gummo as “shareholders.”

While it’s easy to see how this would trigger most conservatives, the billboard’s creators didn’t have that in mind. They simply wanted to appeal to their budding demographic of social activists.

We live in the age of Woke Capital, and anyone who doesn’t subscribe to this zeitgeist is now (according to the Woke Left) some kind of deplorable, even if they are a basic Bernie Bro. Identity politics are no longer social constructs, but sinister tools used in order to create propaganda for a vocal political minority. Pretty much everybody hates Woke Capital, yet their billboards remain in our airports, staring as us through the eyes of children who look like they’re sex and drug trafficking victims.

While it’s easy to ascribe malice to an act that’s most likely just stupidity, one must wonder how the executives at Lombard Odier can be so out of touch with Advertising 101. How did these people think that creating a billboard with famished children was going to help their cause? Are consumers going to look at this billboard and “invest in sustainable strategies” or is it just a vanity project?

I can just picture the response of the executives now: “We’re getting families to invest in diversity! Don’t you see that our radical strategy will pay off in the end?”

This is a family affair, and these child-actors have parents who encourage them to lead this spectacle. Much like forcing children at protests to hold up signs, the liberty of the children ends up being neglected in favor of a political agenda. This is like a dystopia right out of the television series Black Mirror. What next? Infants on billboards championing tolerance and equality? Invest in multi-racial and multi-gender lollipops?

One can’t forget the way the banks use rainbow flags to gentrify the queer demographic that initially started Pride, including the Federal Reserve itself. While seeing rainbow flags on banks doesn’t approach the level of exploitation that Lombard Odier does, the behavior is cut from a similar cloth. It’s common for the Left to sell activism and ideology through products, and the exploitation of children should be noted. If banks are turning into social justice institutions that treat children as weapons of propaganda, we’re headed down a dark road.

—Rachel Haywire is the author of The New Art Right.