Detail was the night's loser, as always. 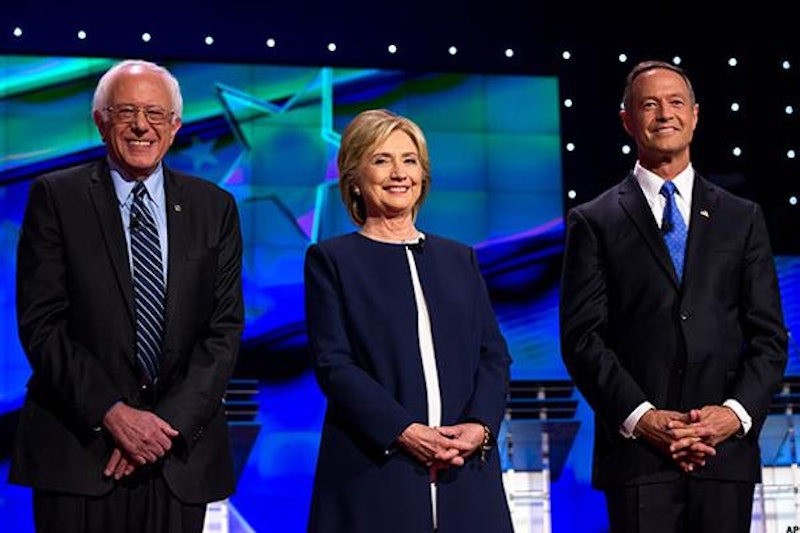 The Paris attacks gave each of the Democratic candidates a chance to act especially like him or herself at the CBS debate this weekend. Bernie Sanders said, in effect, “Terrorism, it's awful, and too bad, Paris. Really, because we got to get ISIS. But you know what I keep hearing about? Income inequality.” That's a paraphrase, but you get the idea. Martin O'Malley, asked what experience he could bring to bear on a big-league crisis, positioned himself as just barely relevant. State and local crises didn't measure up, he said, but he’d learned to be on his toes and “create feedback mechanisms.” For her part, Hillary Clinton grabbed terrorism by the nape of the neck and dragged it into her answer about Wall Street. Sure, Clinton said, she’d helped the banks, but that was because 9/11 had been so bad for the financial district. This thought produced mass eye-rolling on Twitter. Well, we knew she was a Clinton when we signed up.

I still don't know why we need Glass-Steagall instead of Hillary's Wall Street bill. A debate is supposed to clue in voters about basic policy differences, and Wall Street is the dividing line between Sanders and Hillary. But their exchange on this topic came down to shout-outs. Glass-Steagall was the motto of Sanders and O'Malley. Paul Krugman was the counter-offer of Clinton, who also deployed “comprehensive” and the somewhat dusty name of Paul Volcker. “So, I mean this may seem like a bit of an arcane discussion,” Hillary said. It didn't. It was like listening to people arguing about a band and name-checking critics. The ideas behind the names aren't that tough: this band plays fast, this guy says they ought to play slow. But the ideas in the Wall Street debate are a bit tough, and you can't get at them without some details.

Even with three candidates on stage and nobody shouting, details came up short. Yes, John Dickerson did a good job and the Democrats didn't do the stupid things the Republicans did. I'm not saying the GOP debates have been unruly but fruitful, because mainly they've been dinner theater. I'm saying that a modern U.S.–style debate reveals nothing much. That's true when it malfunctions, as with the Republicans, and when it functions, as with this weekend's gathering on CBS. The debate was heavy on boilerplate, statements of principle and declarations of loyalty. I liked when Hillary said, “Wait a minute, he has basically used his answer to impugn my integrity.” But maybe that's me: I like seeing Hillary tee up for a fight. During commercials, the smart young pundits being streamed by CBS said O'Malley had surprised people. He seemed competent to stand at a podium and say Democratic things. Last time he didn't seem that way, mainly because his affect was so wavering and out of phase. Back then he was like a hologram that was embarrassed by its poor transmission. This time he was like a standard Democratic politician wearing a suit.

Bernie's issue, Hillary's lack. Pundits say Hillary was hit hard and put on the defensive during the debate. I suppose so, because I found myself with the following thoughts. In 2007, the good liberal looked at Iraq and knew that Obama had got it right and Hillary screwed it up. In 2015, the good liberal knows that Wall Street hates Sanders but doesn't hate Hillary. Sanders sees Wall Street as an animal that has to be brought under control. Hillary doesn't have that mission. As always, Hillary and Wall Street are engaged in a bit of a dance. One hopes the balance of forces will keep her acting the right way. But it's a bet and that's all.

America has suffered two great disasters this century. With Obama, liberals had a chance to support somebody who’d been completely right about the first disaster. With Sanders, there's the same chance with somebody who was completely right about the second disaster, the economic meltdown of '08. Hillary has spent four decades in public life without managing to be either of those people.