The Debate Debate Is Preposterous

Most Americans would prefer less coverage of a presidential election. 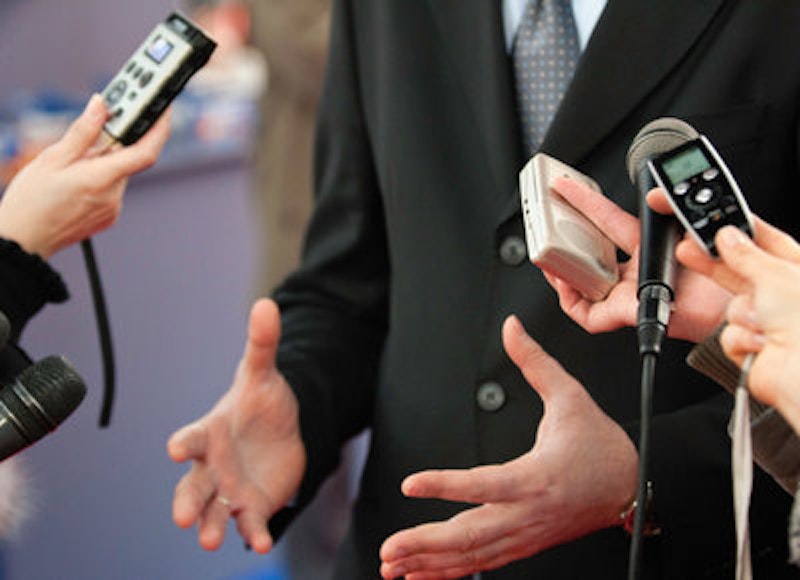 The current debate over presidential debates is, in my estimation, a non-story, another example of the overload of media correspondents who cover the largely meaningless gathering of candidates. Instead of complaining about CNBC’s John Harwood’s rough-and-tumble moderation of last week’s GOP fest, the better question is why so many debates are necessary? Yes, the Republican National Committee has reduced the number from 2012’s embarrassing spectacle, but it hasn’t gone far enough. How about this: one debate in post-Labor Day September, another in November, and then a finale just before the Iowa caucuses? Same for the Democrats.

Harwood’s certainly not a Republican, but the squawking from conservatives about his questions is too much belly-aching. It bears repeating: in politics, the media is overwhelmingly liberal, sucking up to Democrats, while the big donors skew dramatically to the GOP (unless you’re the Clinton family, and then all bets are off).

I’m surprised that conservative commentators have taken the bait and wasted so many words on this issue. For example, The Federalist’s David Harsanyi, whom I enjoy reading, wrote a story yesterday headlined “The Media Are Terrible, But So Are the GOP’s Debate Demands,” in which he attempts to lay out a more equitable solution to this “problem.”

He writes: “[I]f you prefer moving the debates to conservative outlets, my colleague Ben Domenech’s preferred proposal—that the RNC partners with conservative organizations and then auctions off the rights to larger media organizations—makes a lot of sense. This would ensure the media gets its ad revenue, the GOP gets its debate out to the largest number of people possible, and Republican candidates answer questions that matter to constituents rather than Beltway journalists posing as journalists.”

I liked the dig at “Beltway journalists,” which was too charitable, but the concern that the “media gets its ad revenue” stuck in my craw. Since when are politicians—or RNC and DNC—obliged to care about the revenue stream of networks like CNBC, Fox, CNN or MSNBC? Isn’t the biannual bonanza—obviously more in a presidential cycle—of millions upon millions of advertising placed by candidates enough? Too many debates means too much media clutter. There’s the pre-debate predictions, obnoxious candidate preening, the actual coverage of the debate by too many people, the frenetic, disjointed Twitter posts, the pre-rehearsed “spin room” afterwards and then the instantaneous online polls that are usually unreliable. This year is somewhat different since Donald Trump’s inclusion has dramatically spiked ratings, and that alone should tell you that the entire business is simply more reality entertainment.

I suppose fewer debates hurts the back of the pack, the also-ran candidates who need exposure to stir excitement, but if, say John Kasich or Martin O’Malley are really running seriously, they can buy infomercials in targeted states. The multi-debate barrage is a vanity parade for both the politicians and the media: most Americans would happily do without it.

Naturally, The New York Times, a virtual arm of the DNC, felt compelled to editorialize over what it considers the “frothing” by the GOP candidates’ reaction to the CNBC debate, and their list of demands for upcoming encounters. So what? The networks are under no obligation to cave in to the likes of Trump or Ben Carson. A choice bit from the typically sanctimonious unsigned editorial: “The debates are too important to be guided by a daffy document drafted by hotheads [the candidates and their consultants], demanding media outlets ‘pledge’ that the temperature in the debate hall ‘be kept below 67 degrees.’ The ridiculous manifesto drafted Sunday is undergoing revision. The R.N.C. would do well to exert whatever influence it has. It is the party’s job, not the media’s, to save the Republican presidential candidates from themselves.”

As if the Times has any interest in the fate of Republican candidates. And let’s be clear: the slew of debates are not “too important” that a reduction would harm American democracy. It’s not as if reporters, on both the left and right, don’t already fill their employers’ websites and print products with every single utterance a candidate makes, whether substantial, inane or a gaffe.

So, as noted above, three primary debates for each party, and then three during the actual general election. Isn’t that enough?