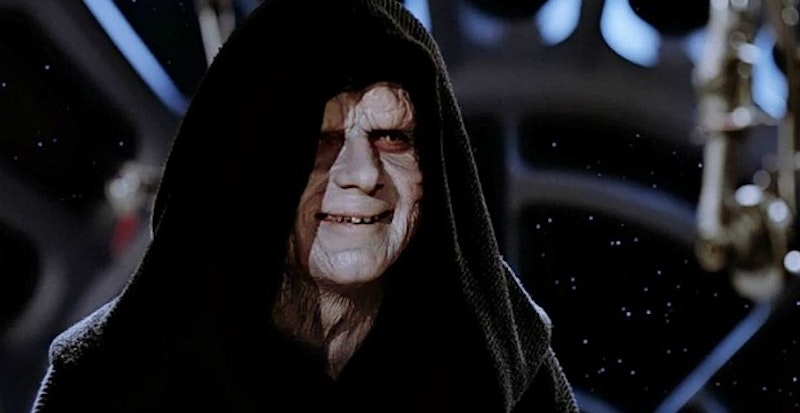 I accidentally added a tiny bit to the already substantial fear of terrorism among the staffers at Weekly Standard 13 years ago by sending writer Jonathan Last an email reminding him the Rebels might blow up the Standard’s Death Star if they built one. I was merely reacting, quite reasonably I think, to Last’s (joking) argument that the Empire in the Star Wars movies might be a more admirable source of social and political order than the chaos-causing Rebel Alliance. What I didn’t know was that the Standard had been receiving actual death threats due to their drumbeating in favor of war in Iraq.

A decade later, though, I feel slightly less guilty about adding to their fear, now that the magazine’s co-founder William Kristol has argued (jokingly?) there’s no evidence in the films that the Empire is evil (by his militaristic, order-loving standards), and former Standard staffer Sonny Bunch has (seriously?) taken this perverse line of reasoning up a notch by arguing that even the Empire’s destruction of the planet Alderaan, Princess Leia’s home, was justified. (Bunch calls the planet-destroyers the “Intergalactic” Empire, either an error on his part, a subtle Beastie Boys shout-out, or a veiled hint that he already considers the U.S. an extension into the Milky Way of the hegemonic Sith dream.)

I admit that when I saw the first film as a lad, I, like Kristol, did not discern any clear evidence who the heroes and villains were for the first minute or so—in part because at that age I did not know the meaning of the word “tyrannical” in the opening scroll. Like everyone else, I had to rely on the heavy-handed visual cues: dark, light, inhuman, pretty, etc.

All joking aside, it should be apparent to any non-sociopath by somewhere in the middle of the original film that the Empire rules through fear and the murder of innocents, though Lucas’s work had a marvelously realistic-feeling “amoral 70s” streak in the early years (see his THX 1138), which is easily forgotten after four decades of talk about the Dark Side and which leaves at least a smidgen of room for interpretation. But no, you don’t blow up an entire inhabited planet on the off-chance there are a few treasonous rebels there, just as you don’t topple multiple governments in the Arab world on the off-chance doing so will enable you to catch a few terrorists (while inspiring or even funding others).

It makes a deeper sense, though, that the Imperial side would appeal to the neoconservatives, not just because both movements seem gleefully indifferent to unintended consequences and innocent bystanders, but because the Imperials were consciously modeled upon the Nazis, and the Nazis and neocons are in one important sense philosophical siblings. Though it’s rarely mentioned, both were influenced by philosopher Leo Strauss.

Yes, much as one hates to say anything that emboldens crazy left-wing conspiracy theorists, it’s true. Strauss, though Jewish, was pen pals in his Weimar youth with founding Nazi philosopher (and all-around power-worshipping ghoul) Carl Schmitt and helped convince Schmitt to make one of his books less sympathetic to individual rights and bourgeois liberalism. Individualist liberalism was a mode of thought that seemed weak and ripe for destruction in Schmitt’s mind and too feeble and discredited to last in Strauss’.

The Nazi film director Leni Riefenstahl in turn chronicled Nazi parades and uniformed assemblages with a flair that exerted an obvious influence on Lucas’ depiction of his marching, lock-step stormtrooper villains. Is it any wonder such imagery resonates with the neoconservatives, who after all are not mere free-marketeers with a respect for tradition, like mainstream conservatives of the Cold War era, but authoritarian worshippers of martial virtue, global “empire,” and grand government projects intended to display “national greatness”?

Don’t get me wrong: Some quarters of the left are little better, with their early admiration of Mussolini and more recent grudging, deconstructionist respect for the aforementioned Carl Schmitt. It’s all further evidence for my contention that all these factions will be lumped together and declared monstrous by future generations.

In the meantime, perhaps we should look with a bit more sympathy upon leftist Gore Vidal—whose pessimistic views of republican decline into empire were likely the biggest political influence on George Lucas and who condemned William F. Buckley as a “crypto-fascist” in their famous televised argument. Vidal’s accusation was a bit premature, as Buckley retained a bit of the right’s old-fashioned libertarian streak. But the neoconservatives were on their way, at first merely decrying the left, then venerating big government, then celebrating war, and now in their sick, advanced senility, even celebrating the destruction of Alderaan.

Let us hope the next step in their evolution is retiring to write online fan fiction, not, say, trying to elect Marco Rubio and kill millions more people.

On an equally nerdy but less warlike note: check out Antiwar.com contributor Lucy Steigerwald hosting a video conversation about the Republican candidates between her brother Joe, Liberty.me head Jeffrey Tucker, Franklin Harris, and yours truly. Unlike Sonny Bunch, we do not cheer when planets die, nor, say, when Marco Rubio staffers punch Rand Paul staffers. It’s time to choose sides, America. Don’t embrace the dark.