It was still quite a good day. 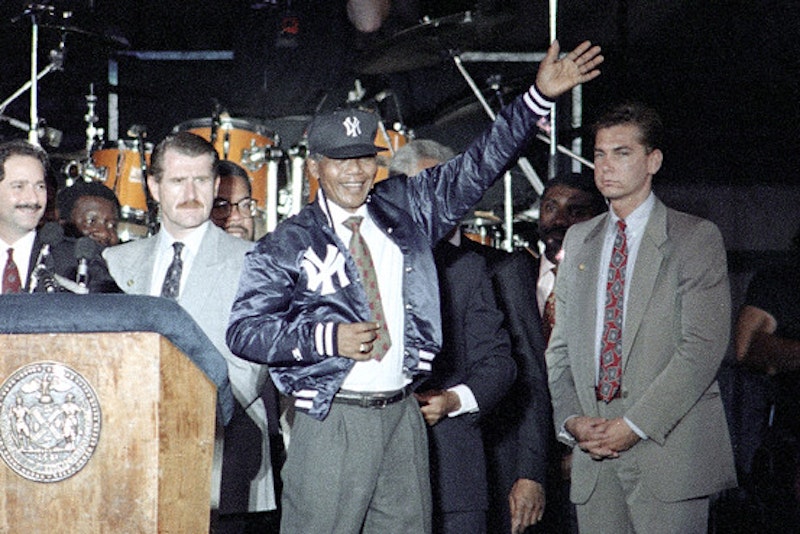 Many years ago I had a job at a newspaper on Wall Street. When Nelson Mandela came to town in 1990, our neighborhood was the starting point for his parade. On my lunch break I walked to the parade site with a co-worker, a white lady from South Africa who loved Mandela and hated apartheid.

We stood there a while with other early attendees, the two of us looking very much like rice among raisins. A reporter for a radio station came by and asked our view of things. My co-worker, who had a lovely British accent, said straight out that she was moved and delighted to see this day arrive. Rather more heavily, I opined that I had looked into the matter of Mandela's affection for Fidel Castro and Muammar Qaddafi and had decided that his views were quite understandable, given that Castro and Qaddafi were against apartheid and that the United States government was largely for it.

This was a ragged, unpleasant time in the city. The latest incident had been a fight between a black customer and a Korean storeowner that had resulted in a long and ugly boycott of two Korean-owned grocery stores, a boycott enforced by crowds that gathered outside the stores and occasionally shouted racial slurs. But today Koreans were here to honor Mandela.

“That's what we need,” said a tall woman standing near me. “Yes, that's what we need now.” A man pumped his fist in the air. “That's right,” he said to the marchers. “You okay. You right.” The applause kept on. The people holding the banner straightened up and squared their shoulders. Everybody was smiling.

Soon after that my co-worker and I had to leave for the office. But whenever I look for things that are good about people, just people in general, I think about that parade. To tell the truth, I made myself cry just now by writing about it. Maybe you had to be there; I'm glad I was.

A final thought. Nelson Mandela was not a fan of the United States, very often for good reason. “If there is a country that has committed unspeakable atrocities in the world, it is the United States of America,” Mandela said just before we invaded Iraq. “They don’t care for human beings.” Our government kept him on a terrorist watch list until 2008, decades after the Boers had given up on opposing him.

But Americans love Mandela and they should. He is recognized around the world as a man who used politics to work tremendous good in people's lives. His skill and restraint brought about a democracy where there could have been a bloodbath. The Nobel committee accepts this and so does Sen. Ted Cruz, which makes for quite a span of opinion.

Mandela was demonstrably on the side of the angels. If he was against us, then what are we doing wrong?