The Iraq War and Andrew Sullivan

The blogger’s e-book is about one person’s psychodrama. 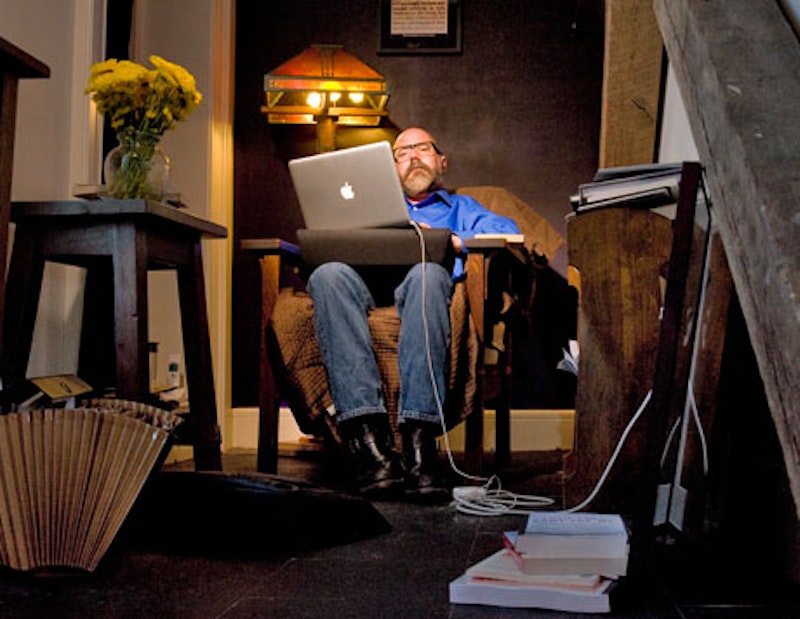 I Was Wrong: A Real Time Chronicle of the Iraq War, 2001-2008, Andrew Sullivan's recently released e-book, is a compilation of his blogging on the Iraq war. It begins with a post on September 11, 2001, a few hours after the attack on the World Trade Center. "When our shock recedes," he writes in that first entry,

"[O]ur rage must be steady and resolute and unforgiving. The response must be disproportionate to the crime and must hold those states and governments that have tolerated this evil accountable. This is the single most devastating act of war since Nagasaki. It is the first time that an enemy force has invaded the precincts of the American capital since the early nineteenth century. It is more dangerous than Pearl Harbor. And it is a reminder that the forces of resentment and evil can no longer be appeased. They must be destroyed—systematically, durably, irrevocably. Perhaps now we will summon the will to do it. "

Sullivan's initial reaction is a familiar one. It is a story of evil revenged, good triumphant, and violence unleashed. World War II is summoned up, through references to Nagasaki, Pearl Harbor, and appeasement. The accuracy of the past allusions (Saddam's chemical attack on the Kurds in 1988 caused more deaths than September 11, to name just one post-Nagasaki example) is less important than the future they point to. That future is just war, and a new greatest generation, of which Sullivan (through that collective "we") will be a part.

Of course, it didn't work out that way. I Was Wrong is the story of a story gone awry; it's about how Sullivan thought he was in a book about good defeating evil, and instead discovers himself in a different tale altogether. The arc is traced clearly enough in the chapter subheads of the e-book: "Trauma," "Doubt" and "Regret." Shocked by 9/11, Sullivan hoped for, demanded, and finally was thrilled by the reality of war. As the Iraq quagmire deepened, and the extent of Bush's "feckless" mendacity became clear, he began to re-examine his support. And finally, with the revelations of Abu Ghraib, he realized the war never should’ve been waged, and that he had been complicit in an atrocity. "Those of us who supported this war cannot wash our hands of the blood of tens of thousands of innocents it has now claimed," he wrote in October 2006. And he adds, in an epilogue, "Although my intentions were good, I feel ashamed of some of the sentences in this book."

Sullivan's recognition of his errors, and his willingness to admit them, are admirable. Yet, there are unsettling ways in which the story he thought he was telling in the beginning and the story he ends up telling fit together almost too well. In his second post on the day of 9/11, for example, Sullivan writes:

It feels—finally—as if a new era has begun. The strange interlude of 1989–2001, with its decadent post-Cold War extravaganzas from Lewinsky to Condit to the e-boom, is now suddenly washed away… The one silver lining of this is that we may perhaps be shaken out of our self-indulgent preoccupations and be reminded of what really matters: our freedom, our security, our integrity as a democratic society.

In this story of 9/11, the fall of the towers becomes an awakening; a traumatic shock that erases the past and leads to moral and spiritual renewal. Though the specifics are somewhat altered, isn't that also the story of I Was Wrong, with its path from benightedness to revelation to knowledge, awakening, and renewal? Sullivan here, waxing lyrical about America and freedom and democracy, doesn't sound very different from Sullivan at the end of the book endorsing Obama and "a new direction, a new statement that the America the world once knew and loved is back." We always seem to be regenerating in one way or another, always involved in a never-ending American apotheosis of purification and renewal.

This is just another way of saying that Andrew Sullivan is still Andrew Sullivan; he may have reversed his opinions, but he's still the same excitable, starry-eyed blogger in 2008 that he was in 2001. From this perspective, the most important part of the title I Was Wrong is not the "Wrong," but the "I." In his afterword, Sullivan says, "[A] blogger writing daily… has nowhere to hide," by which he means that he can conceal nothing. But it also seems to suggest that he conceals everything, that he's so close to the camera that you can't see past him. 9/11 becomes his revenge fantasy, and I Was Wrong turns the Iraq war and its aftermath into the confessional, spiritual journey of Andrew Sullivan.

Blogging as a form explains a good deal of this self-absorption. You read Sullivan not just to get his take or opinion, as you might find in an op-ed. Rather, you read Sullivan's blog, or book, to get his story of the news—an ongoing narrative about the world, filtered through his particular perspective. The fact that the Iraq War ends up being about Andrew Sullivan isn't because Andrew Sullivan is a navel-gazing narcissist; it's simply a genre default. In superhero comics, the superhero wins; in romance novels, the girl gets the guy; in blogging, the blogger is front and center. If you don't like the trope, you read something else.

Whether you like them or don't, though, tropes have meaning. In this case the narrative impulse to turn piles of dead bodies into a story by, and/or about, this one guy watching seems like it has more than a passing relationship to American policy. The invasion of Iraq, as Sullivan's book painfully shows, was about a desire for revenge and for American renewal and goodness—it was about us, first and last, in other words, rather than about the WMDs that weren't there, or about human rights which Abu Ghraib showed we didn't much care about in the first place. Sullivan can change the story about himself from revenge to regret, but he can't stop making it about himself. One way or another, for us the meaning of Iraq is not Iraq, but us. The real moral error in I Was Wrong is not believing Bush or miscalculating the costs of war, but treating a country full of people as characters in one's own psychodrama. That's called imperialism. As this book shows, even for someone as thoughtful as Andrew Sullivan, it's a hard vice to break.