Republicans, Politico and the Ladies 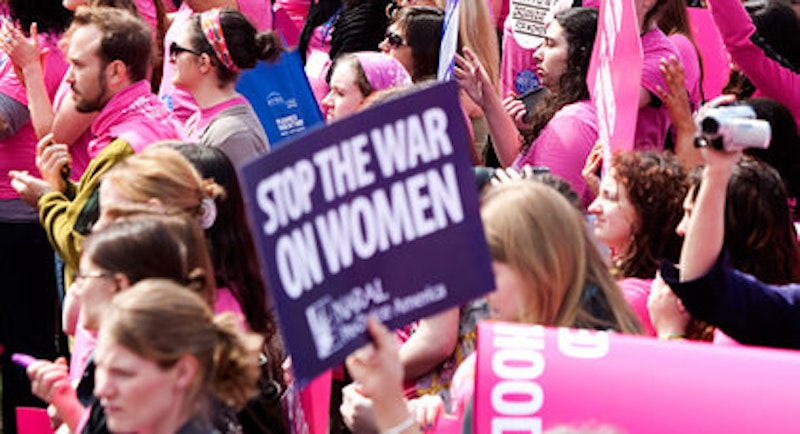 You want to know how to talk to women? Don't say anything about rape except that it shouldn't happen. That's the first rule and for some people it's a toughie. Republican lawmakers, for example. Or Republican candidates who aspire to be in a lawmaking position. Politico reports that the GOP is trying to school these two groups on what the females of America can and cannot put up with when it comes to verbal communication.

The website doesn't say what guidelines the party has arrived at. Instead the article focuses on why the Republicans want to make this move (for example, there are a lot more Democratic congresswomen than Republican congresswomen) and the thoughts on the subject of various party hacks.

It’s not much of an article. As the piece presents things, the big problem is that a clutch of Republicans has come off as “tone-deaf to female voters.” There's no mention of forced ultrasounds or Planned Parenthood defunding, or of the outright disgust and hatred expressed by Rush Limbaugh, the one man Republican candidates love almost as much as Ronald Reagan, when a young law student made arguments he didn't like about insurance and contraception. The woman said contraception should be covered and Limbaugh called her a whore.

All that gets disappeared. Politico demurely touches on the Republican candidate who offered his thoughts about “legitimate rape” in a Senate race last year, “touching off Democratic charges of a GOP 'War on Women' that dogged Republicans in campaigns across the country.” But the candidate made his remarks in August 2012, and the two parties' publicity battle over the “War on Women” was a going thing way back in the spring of the same year. This was evident to the dullest observer, by which I mean Politico. (“GOP Battles Back in 'War on Women,'” Politico, April 12, 2012.)

I don't know if Politico has a problem with women or a special love for Republicans, or if its reporters are so docile that they accept whatever premise their sources give them. All right, I think it's the last. The Republicans said they were tackling a message problem, so a message problem is what it became for purposes of the article.

The article did get one neat bit in there. John Boehner, the Speaker of the House, had his “top aides” sit down with Republican staffers “to discuss how lawmakers should talk to female constituents.” Not necessarily how to talk about abortion or rape, it would seem, just how to talk to a female citizen. And how did the session go? “Let me put it this way,” said an unnamed person who was in the room, “some of these guys have a lot to learn.” Whoever the source was, I bet she rolled her eyes.

Tom Friedman was right. Mocking Tom Friedman of The New York Times is a hobby indulged in by resentful left-wing journalists and their scruffy followers. There's a lot to be said for this pastime. The heavily mustached opinion belter cannot bruise his gorgeous beliefs by bringing them in contact with facts, a weakness that caused him to cheer lead the Iraq War and still inspires him to make Wave O' History pronouncements about our global marketplace. Mussing him up is a duty and a pleasure, but the combination can sometimes be too strong for those who don't keep their guard up.

A liberal blogger recently offered a round-up of favorite smackdowns, beatdowns and takedowns, one of which was a long-ago review by Matt Taibbi of Friedman’s book The World Is Flat. Taibbi does the stomp-and-snort routine one finds across much of the Internet but especially among liberals who want to feel like writers. He's supposed to be a smart, knowledgeable critic of the ruling class, not just somebody who's pissed off, so his review approaches the Friedman book in the spirit of fierce lucidity debunking pie-eyed daffiness. “Friedman is such a genius of literary incompetence that even his most innocent passages invite feature-length essays,” Taibbi writes, teeing things off. “I'll give you an example drawn at random,” he continues and then proceeds to make a fool of himself.

The example has to do with Friedman at the airport: “I stomped off, went through security, bought a Cinnabon, and glumly sat at the back of the B line, waiting to be herded on board so that I could hunt for space in the overhead bins.” Taibbi cannot take this. “Forget the Cinnabon,” he says, the voice of outraged intelligence. “Name me a herd animal that hunts. Name me one.”

A smart-mouthed Internet commenter fires back with the laconic “Wolves. Orcas. Hyenas.” But the comment gives Taibbi too much credit. An animal doesn't have to be a herd animal in order to be herded. It just needs some outside force that forces its movements into a narrow channel with an assigned destination. For instance, the animal can be a human with a mustache, a human who has to get on board his flight. On board the human must find someplace to put his laptop. He looks for such a place. He hunts for it. Because humans can hunt.

In fact Friedman proposed no animal metaphor whatsoever. He was describing a commonplace human experience in terms that any literate human can recognize as sensible. Unless that human has primed him or herself for a prolonged bout of giggling and pointing. There's a lesson here. If you're going to be smart, don't be stupid.