Dick Cheney's daughter is a chip off the old block and always has been. 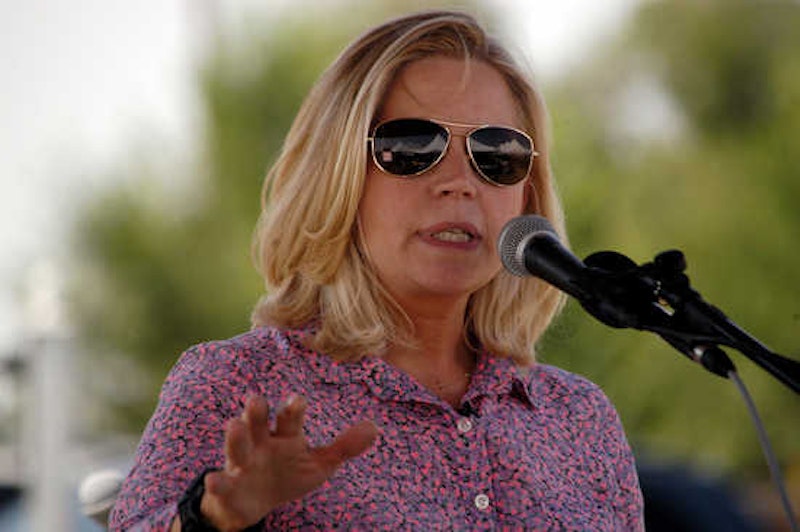 Brace yourself. You're about to read a dissection of a 25-year-old op-ed piece from a college newspaper. The dissection may take as many words as the piece itself, possibly more. Why the heavy weather? Because the op-ed in question is, in its way, a remarkable piece of work. It's fluent and assured and blatantly dishonest. It's the work of a Cheney, and as we go on you'll see that it demonstrates a sad recurring principle about modern politics in the United States.

The author, Liz Cheney, is the daughter of Dick Cheney, vice president in our country's last Republican administration. She is also a candidate for senator in Wyoming. Twenty-five years ago she was a student at Colorado College, where she published her arguments against divesting college funds from companies that did business in South Africa. In the piece the young Cheney wants us to know she's all against apartheid, which was then crushing South African blacks. She calls it “an abhorrent system for which there is no place in the world.” But she wants American companies to keep doing business with the people and government that were keeping apartheid in place.

How do you square this circle? If you're a Cheney you get the job done by means of condescension, sanctimony, logical incoherence and a willingness to pretend. The results are on display at MotherJones.com, where an accompanying item highlights the old column's 40-carat piece of Cheneyism. It's a quote that goes like this: “frankly, nobody's listening.”

Yes, condescension. Hey, you kids who want companies to pull their investments out of the apartheid system, get this—Liz Cheney of Colorado College says you just don't matter. You're irrelevant. Why is that? What evidence is there that nobody's listening? She doesn't say. She just wanted to get the thought on record. The Cheneys settle into their game that way. Another touch: the student the piece responds to is named Michelle, so the column first-names her. The student says the world unquestionably needs to make a statement against apartheid. “Actually, Michelle,” Cheney writes with a tuck to her lip, “there is some question.”

Now we get to the sanctimony. Cheney goes on about the pointlessness of moral statements, a theme that makes up the backbone of the piece. The divestment agitators are just indulging themselves, she says. “It is fulfilling to express our moral outrage,” but what about the lost jobs in South Africa, the blacks left without work? “A choice to divest can only be made if one believes a moral statement is worth more than the lives of those people,” Cheney says.

Those divestment people must be a feckless bunch. Cheney certainly thinks so. She looks at the downtrodden of South Africa and sighs. “We have no right to tell those men and women they will not be able to feed their children because we must satisfy our own urge to make a moral statement,” she says soberly.

You see where the incoherence comes in. “Like most moral statements,” Cheney says of apartheid, “it accomplishes nothing tangible.” But she argues that it does do something tangible, namely that it eliminates jobs and increases economic misery. She tries to sidestep the contradiction by saying less scrupulous competitors will replace the companies that pull out, and that the interlopers will be more ready to collaborate with the apartheid government. But the claim pops up once. The rest of the piece is all about lost jobs. It's about the harm divestment will do to South Africa's economy.

Of course, economic sanctions have this same effect. They increase misery among the population so that the government that's targeted will have to deal with more and more desperation and anger among the people it tries to keep in line. Iran is learning as much now. Present-day Cheney might have a hard time with college-student Cheney. It's a hell of a thing, college-student Cheney might say, taking our moral stand against nuclear proliferation while innocent men, women and children who just want to go about their daily lives, etc. Or maybe she wouldn't say that. Cheneys are adamant about stating principles but tricky about applying them.

For instance, college Cheney is fiercely anti-apartheid but slippery about what apartheid is (or was). She proceeds as if apartheid were the result of black South Africans' poverty and lack of education. Thus good pay and benefits from U.S. companies would “break down the pillars of apartheid,” she says. But the pillars of apartheid were a government and people that wanted to keep blacks down. South African blacks were poor and uneducated because the whites wanted it that way. Change wouldn't come until white South Africa took its boot off black South Africa's throat. Years of international economic ostracism had broken the regime's ability to resist.

This happened in 1990, two years after young Cheney committed her thoughts to paper. Liz Cheney went on to bigger and better things, like a State Department job where she played her small part in the wildly successful foreign policy driven by her dad, the vice president. Great plans were sold for the Middle East by means of condescension, sanctimony, incoherence and a willingness to play make believe. Take that history and combine it with a long-ago college op-ed piece, and we can see a central truth about our times, the one hinted at the top of this article. A Cheney is a Cheney is a Cheney, and you'd better stay the hell away from them.