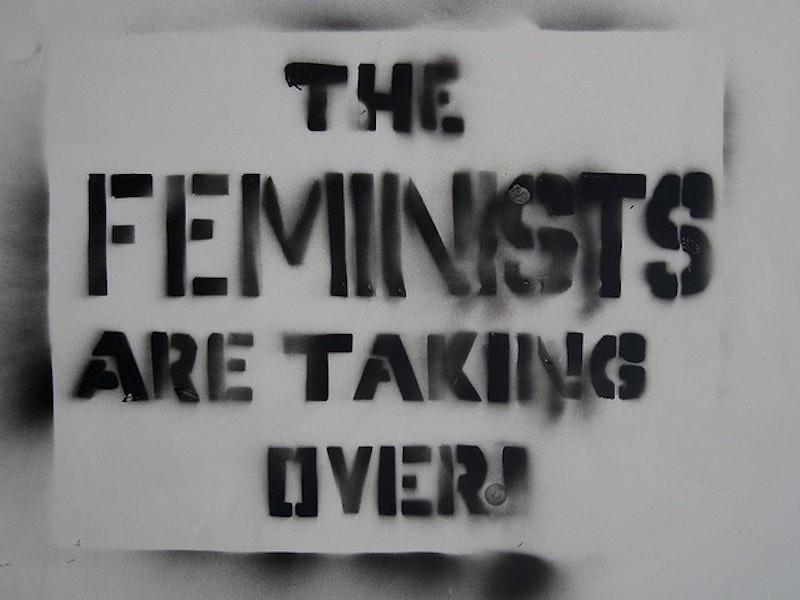 It’s likely that no population thus far in human history has been guilty of louder whining relative to its objective good fortune than white, left-liberal, American females.

One of the main reasons only about a fifth of Americans consider themselves feminists is that feminism continually contradicts itself, urging us to think of women as strong and independent—yet constantly pleading for them to get special, cushy treatment.

In particular, we are asked to believe (as I do) that women can make their own decisions and be held accountable for them—yet we are routinely also asked to believe they have been oppressed by their own voluntary actions. At best, we are asked to define “voluntary” so vaguely and broadly that activists retain the right to declare oppression present at a whim—rather than define it in any predictable way with which a well-meaning person could hope to comply.

Contemporary feminism, like most of the cultural left, is Kafkaesque, by design. That keeps you guilt-wracked and guessing.

Inevitably, this shiftiness about personal responsibility puts feminism at odds with free markets and property rights, which are based on the assumption that one is capable of voluntary, responsible action and that one can be held accountable for things such as contract violations or failure to deliver goods as promised. Feminists know this opposition exists, though some of my fellow libertarians pretend not to notice the tension, in an effort to keep the peace or (as they imagine) to broaden our appeal.

Now we are told women are being treated unfairly because they pay a so-called “pink tax” to buy more-expensive, overtly-feminine versions of some products (“tax” in this case meaning voluntarily-transacted price—no one in the modern world proposes government fines on womanhood, and virtually no feminist ever objects to an actual tax). You would think, though, that:

(A) Having the option to buy different versions of something is a benefit.

(B) Those who don’t want to could buy a not-overtly-gendered version—or even a “male-looking” version if they sympathize with the trans movement (on which, more in a moment).

(C) Women, far from being second-class citizens, must be rather proud of their female status if they’re paying extra to reaffirm it while buying things like phones, and prices are set by supply and demand, after all, and in any other context, it’d be taken as a very encouraging sign that women have so much extra cash on hand they’re willing to pay extra for visible-lady-goods.

But then, among Millennials, women are making more than men now anyway—not that any number of cultural or economic victories will ever dim the feminists’ permanent hate. They will always find an excuse, and the time has come to stop pretending otherwise, as we all politely did from roughly the 1960s until right about… now.

It would be nice if some prominent political figure understood this feminist cultural dynamic—and economics—enough to push back against the madness. Plainly, the rude and sexist Donald Trump is not the man to make the case. Bernie Sanders has been displaying his ignorance of economics on a near-daily basis since the USSR existed. Hillary sure isn’t going to stop pandering to feminist voters, however half-heartedly, at this critical juncture.

And the man I hope beats Trump in Iowa, Ted Cruz, is probably already on thin ice with female swing voters after reports women have found him “creepy” since college. I’m hoping he’s just a good, solid nerd with libertarian tendencies. Sometimes it takes one of those to stand up to the matriarchy.

Somewhere in between Man’s World and Woman’s, by the way, stands columnist Sam Riedel, who accused me of overreacting to the transgender political movement. To be clear, I’ve never suggested I think transgender people burden others by existing—any more than men or women do. But as with feminism, people can use their identity with a given group to generate numerous political demands that ostensibly require action on other people’s part, each “discovery” of a new subgroup becoming an excuse for more tribal redress.

Even very left-wing people should consider the potential multiplier effect of an era in which political demands are generated ad infinitum and ostensibly politically-relevant identities are generated ad infinitum. I’m not telling anyone to “be more normal” or anything or hide themselves. I’m predicting this almost inevitably generates 100,000 new occasions for everything done by everyone to be deemed offensive by everyone else. (Ask the “otherkin” who claim to identify with other species. Or whatever gets discovered next week, if that comparison is too offensive. It probably is. Everything is.)

That coming universal outrage-festival is a worrying and wearying thought no matter what equipment you’re carrying.