The Crying of Lot 45 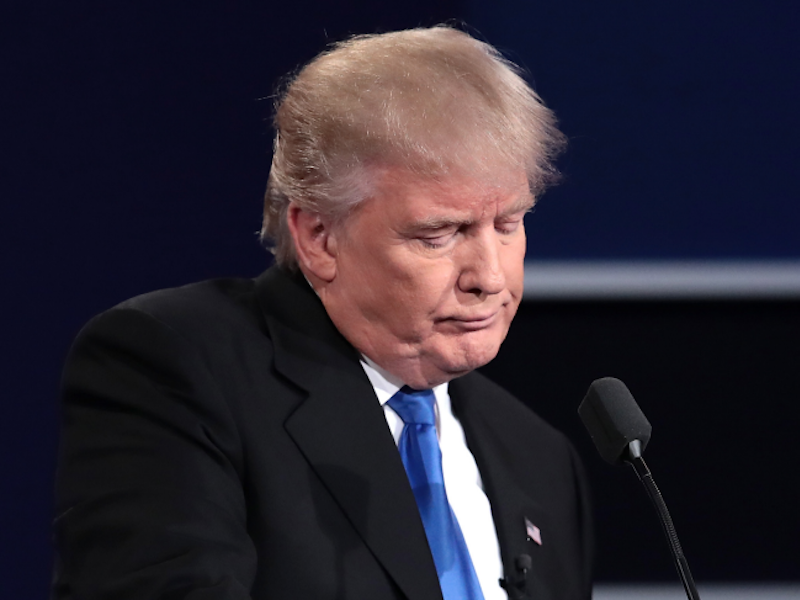 Let's entertain, just for a moment, the possibility that our current political situation is a hoax, that we didn’t elect Donald Trump as the 45th President of the United States, and that the country has no actual chief executive. The Trump we see in the media is nothing more than a bewildered-looking parade balloon. Better yet, he's a Trudeau-esque cutout or some kind of hologram projected around the White House by a Twitter-bot A.I. Now how does that make you feel? You're welcome. I love you, too.

I know it's crazy to feel better at the thought of careening forward with no one at the wheel. But what, at this point, can be legitimately called crazy? Let's be honest, a hoax presidency might explain a few things and directionless chaos may be preferable to pathological bumbling. At least chaos can be worked with, understood, and eventually navigated in some constructive way. You can't do a thing with a demented loon.

With that in mind, Devin Nunes' ongoing career immolation and Michael Flynn offering in vain to flip in exchange for immunity have only made things worse for a White House plagued by well-deserved derision and mistrust. The “stupid and/or evil” binary has never seemed more applicable. We've witnessed the Hindenburg of all failed health care bills; 100 straight days of incompetent malevolence, gaffes, and humiliating revelations; and an enormous intelligence scandal emerging like the kraken of classical antiquity. So viewing the current state of U.S. politics as an elaborate Pynchonian prank has a certain cachet. Now we're staring down the nuclear option vs. fillibuster on Gorsuch with another shutdown in the works. Something's got to give.

Military endgame scenarios with Russia, China, Iran, or North Korea might appeal to Trump's dying administration. But, notwithstanding that (highly transparent and stupid, therefore terrifyingly possible) political Hail Mary, we'll soon need a sense of where we might be headed as a nation. We don't have that at the moment. What we have is instability, uncertainty, and a degree of high weirdness never before seen in a U.S. administration. All we can be certain of right now is that things are bound to get worse before they get better. As Joy-Ann Reid puts it in “The Political Walls Are Closing In On Donald Trump,” “Barring some dramatic change—and we should seriously worry about what Trump and Bannon might cook up in that regard—this only goes in one direction, and that’s further downhill.” How fast it goes and whether it goes off an apocalyptic cliff is still an open question.

We're always looking to the past for an explanation. We're always asking what went wrong. But we never ask whether the current administration is actually a piece of post-structural absurdist performance art. On the night before Trumpcare was withdrawn by the Gaseous Loon and Paul “the Amazing Wonk” Ryan, I stayed on the news feeds, deep into What Went Wrong historicizing and feeling shell-shocked by the possibility that people in my extended family might die if the Affordable Care Act got replaced. Looking back, I should’ve just opened a beer, Netflixed, and chilled. The AHCA was never going to pass. And now, Trump has no viable game plan or the necessary people to carry out a planned tax reform. So, yes, quite a prank, Mr. Pynchon, maybe the greatest hoax in history thus far. The joke's on us.

Alex Shephard in The New Republic observes that, post-AHCA failure, Trump's “tenth week in office was defined largely by a profound sense of purposelessness.” This seems accurate. It's hard to stay the course when nearly every aspect of your professional life is tainted by corruption and scandal. For those of us expecting Manafort to crack about facilitating Putin's agenda all along (and possibly causing multiple deaths); Dmitry Rybolovlev to come clean about his alleged real estate and money laundering activities with Trump and our current commerce secretary via the Bank of Cyprus; Flynn to finally get a lesser plea-bargain and start implicating as many of his former colleagues as humanly possible; and Tillerson to finally have a schizoid embolism in front of Shinzō Abe, Trump's downfall is a foregone conclusion.

Apparently, he's somewhat aware of this and has been talking about resiging, which would be a mixed blessing, given Pence—a less-entertaining yet comparable horror show. Things aren't working out the way Trump thought they would as he does a Pynchonian jazz dance straight out of office and, possibly, into jail if Democrats can define cyber crimes against the United States as “acts of war” and establish that Trump helped facilitate such crimes. Neither Sessions nor any of Trump's other failsafes would be able to help him. In fact, this might already be the case. As Twain puts it in Huckleberry Finn, “Hain't we got all the fools in town on our side? And ain't that a big enough majority in any town?”