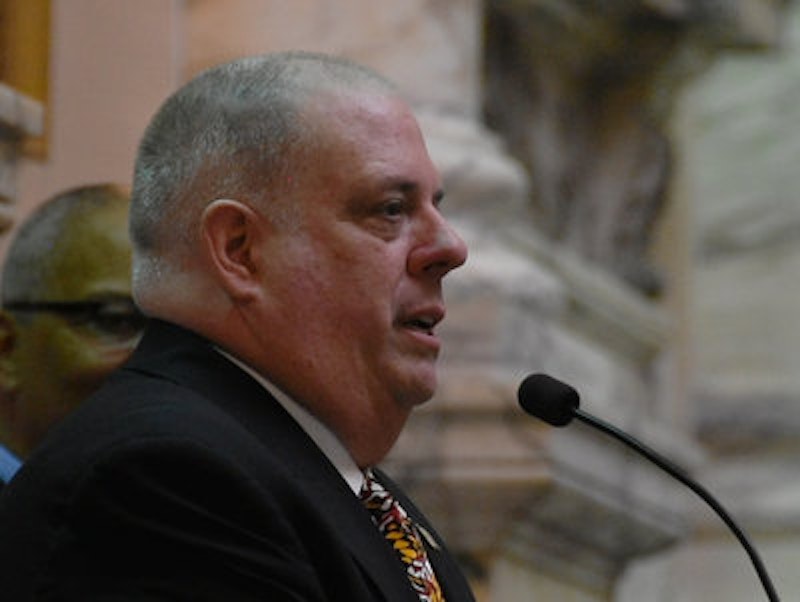 This is the way the Maryland General Assembly ends, not with a bang but a balanced budget. It must. It’s the law. In fact, the green-eyeshade labor of enacting a budget is the legislature’s only legal requirement. But trying to corral the governor and 188 legislators to agree on how to spend $43.5 billion is no easy task. Only a state as wealthy as Maryland can afford elected officials as generous as ours.

Historically, the third year of an election cycle is supposed to be a laid-back session to coast and avoid controversy while preparing for the coming fundraising and campaign season. But having a Republican in the governor’s office, and now a GOP president in the White House, presented rambunctious Democrats with a chance to strut their stuff as well as to contrast their priorities.

So, as the Assembly appeared to ease into a smooth April 10th ending, the previous working weeks exhibited a strong undertow that resembled the nation’s capital in miniature. The session was fraught with partisanship and parliamentary throw-downs that were calculated to lay President Donald Trump’s rearguard agenda at Republican Gov. Larry Hogan’s nimble feet. Hogan deflected much of the incoming flak. But the session’s not over until the words “sine die” are spoken. Here are session samplers:

The surprise departure of the session was Hogan’s dipsy-doodle on his own administration’s recommendations for permitting fracking In Maryland. He decided the proposed safeguards were inadequate—though Hogan had described them earlier as the strictest in the nation—and he joined environmentalists and many Democrats in supporting a permanent ban on the practice of fracturing the earth with pressurized water to extract natural gas. Hogan’s sudden embrace of the environmental cause caught Democrats flatfooted, but privately jubilant, over final resolution of the issue that has nagged the Assembly since a temporary ban was imposed during the previous administration of former Gov. Martin O’Malley (D).

If anything beyond courting the environmentalist vote, it was also a rejection of Trump’s revenge—the wholesale dismissal of environmental safeguards, imposed during the Obama era, that may leave us breathless. We are about to gag on our own toxins. Contaminating the land, air and water is the human cost of comfort and convenience.

In the pathology of politics, another mating ritual is occurring that could cause Hogan major grief. The legislature sent Hogan 27 bills early that he must act on within six days—while the Assembly is still in session. That gives Democratic lawmakers enough time to override the expected vetoes without having to wait until next year, an election year. Gone are the days when there was no time limit on executive action and a governor could simply ignore bills he didn’t like. The inaction was called a “pocket veto.”

And once again, the legislature has chipped at executive authority, this time in the $1.1 billion capital budget—the state’s bricks-and-mortar program—by adding language that would effectively remove the governor from local school construction decisions. The downgrade was payback for meddling in Baltimore County’s school air conditioning program as well as other interference in local prerogatives. (The governor has a line-item veto on the capital budget, which legislators intend to override if he uses it.)

Yet city lawmakers, working with Hogan, were able to fenagle $28 million dollars to help plug a $130 million deficit in Baltimore’s school budget. And Hogan, following an established pattern, has placed a two percent cap on tuition increases at state colleges and universities. But following the dictum that no good deed goes unpunished, the legislature sent Hogan a bill that would establish an accountability system for rating schools and prevent the use of vouchers and charter schools as ways of salvaging failing schools. Hogan threatened to veto the bill that he called “outrageous” even though it passed with a veto-proof majority.

Bail or jail, who pays and who stays, was a mercantile topic—or a bell-ringer in legislative jargon—in the State House. It was not so much a story of who, or who doesn’t, languish in a prison cell while awaiting trial, but one of follow-the-money to see how much the bail bondsman industry contributed to legislators to enact the bill which would have rescued their business from extinction indirectly by court a decision. The black caucus overwhelmingly opposed the legislation.

Late in the session, the issue of Maryland becoming a safe haven for illegal immigrants became a national topic as well as an I-rest-my-case story for the Trump Administration. The House-passed bill, pending in the Senate, would’ve discouraged local police from assisting federal authorities in rounding up illegal immigrants. The legislation, in effect, was designed to prevent profiling or dragnetting people because of their appearance or for other stereotypical reasons.

Along the same time line, two immigrant Hispanics were accused of repeatedly raping a 14-year-old girl in a bathroom stall at Rockville High School, in Montgomery County. U.S. Attorney General Jeff Sessions used the incident as an object lesson on the dangers illegal immigrants pose to Americans, pleading with Maryland not to become a sanctuary state—at the risk of losing federal funding. Senate President Thomas V. Mike Miller (D-Calvert) quickly killed the bill in its present form, saying “Maryland is not going to become a sanctuary state.” Hogan, for his part, described the legislation as an “outrageously irresponsible bill” that would “endanger our citizens.”

As an example of gesture legislation—that which pays tribute but does little—the Democratic Assembly moved to put Maryland on record as ready to extend a helping hand if the Trump Administration defunds Planned Parenthood. (And last week, with Vice President Mike Pence casting the tie-breaking vote, the U.S. Senate voted to prevent states from blocking funding for family planning clinics that also provide abortions. It was basically an anti-abortion bill.) Planned Parenthood provides a variety of health care services, especially to low-income women and in areas where medical care is not widely available. Planned Parenthood is already prohibited from using federal funds for abortions under the 1970s Hyde Amendment.

High on Hogan’s agenda was ethics reform. And with the help of legislative leaders, the Assembly adopted the first ethics reforms in years following a bribery scandal involving Prince George’s County legislators and others. Also changed was the way Prince George’s appoints its liquor board officials.

Congressional redistricting is legalized bodysnatching.  As an exercise in the mathematics of politics, it appeals to wonks. The legislature didn’t exactly kill Hogan’s proposal to sanitize the process but it performed what in the State House is known as “loving it to death.” Hogan had proposed creating an independent commission to re-draw the state’s eight congressional district boundaries following the 2020 census and every 10 years thereafter.

The legislature said fine, but amended Hogan’s bill to say only if the five other states in the immediate region (Mid-Atlantic states) adopted independent redistricting commissions, too. Fat chance. Republicans now control 31 state houses and aren’t about to surrender their congressional majority, at least without an election in which they currently have the advantage. (Seven Democrats and one Republican make up Maryland’s delegation to the House of Representatives.)

And not to be forgotten are Maryland’s seafood appetites and the watermen who satisfy them from the Chesapeake Bay, which H.L. Mencken described as “the world’s largest protein factory.” The legislature took steps to protect existing oyster sanctuaries as well as the crabbing industry. One legislative action would prohibit commercial harvesting of oysters in previously established sanctuaries. The other move involves a possible change in crab management policy following the firing of a veteran scientist who oversaw the growth in crab population over the past 10 years.

Every legislative session has a rhythm and cadence all of its own. No two sessions are alike. Every piece of legislation has a sponsor, an interest group or a constituency. It’s all too easy to forget that it’s the function of the General Assembly to kill bad bills as well as to enact good ones.