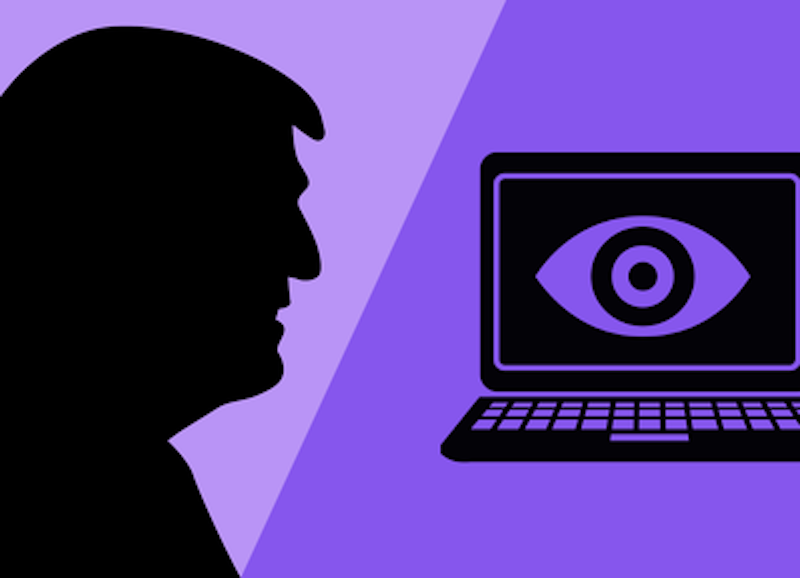 There’s rarely been a situation that more emphatically demanded surveillance than Donald Trump. A presidential campaign colluding with a foreign power for political and financial ends is a danger to the republic. But the surveillance of Trump and his people during the campaign is itself also a danger to the republic, or an indication that we’re no longer a republic. Whether you bash or defend Trump, it’s suddenly striking that we're fucked both ways around, getting run by one secret police organization or another. The FSB gathered and leaked communications from the Clinton campaign; the NSA gathered and leaked communications from the Trump campaign.

Don't let loathing for Trump make you dismiss his accusations or accept the intelligence community's defense at face value. It was “incidental”; it was “perfectly legal.” You wouldn’t accept that if it were happening to Hillary Clinton; it's just the kind of thing intelligence-type people say even when it's false. But even if it's true, the situation is disturbing. One way or another, I think, it's obvious that they have all sorts of communications from inside the campaign and the transition.

When you are essentially sweeping up everything, you can target someone with a wink: you find all incidental/foreign connections and develop new ones. You circle around the target. But it will amount to the same thing: a warrantless “wiretap.” Almost anyone might be targeted this way, and anyone can be, because they’re evidently working with a huge database containing much of the world's communications. In other words, they could probably reconstruct your activities pretty well for 2015. They could do that with a FISA warrant, or they could do it incidentally.

This essentially makes “the intelligence community” the President of the United States. Anyone who’s not squeaky-clean, politically and personally, is potentially subject to leverage. Indeed, little needs to be expressed explicitly; every time a senator or a Supreme Court justice runs across a DNI or an NSA director, he's going to wonder. A raised eyebrow would often be enough to make an ally for life. I’m telling you that right now in Washington, open criticism to the intelligence agencies, or serious investigation of them, is liable to be fatal to your career. Every American president from now on will be someone who, at a minimum, the people with the surveillance have approved.

I speculate that, just before he started tweeting his wiretap allegations, someone raised that eyebrow at Trump. Perhaps they left him in no doubt that they had his communications. Perhaps they cornered him. Since then, the Trump people have been thrashing about in the sort of freak-out that drives you to utter incompetence, a condition crystallized in the name “Nunes."

Again, I think the intel people were in a position where they had every reason to develop the surveillance. But they could’ve developed it whether they had good reasons or not. They could’ve developed it against a presidential candidate—or anyone else—against whom they had personal grudge, or with whom they had a political disagreement. These agencies were (nominally, at least) under the direction of the executive, which is also to say they were (nominally) operating under the leader of the Democratic Party. That's quite an advantage for the incumbent's side. Or say Rand Paul had won the Republican nomination, and run in the general election on a platform of dismantling the national security/surveillance state. The intelligence community might well have regarded it as in their personal interests and in the interests of national security to stop him, and it's quite likely they could have. No one is going to be dismantling anything, I believe; this is our permanent condition.

I wish I had some sort of solution to suggest, but the current situation shows the problem to be intractable. If Trump was working with the Russians, he's got no business anywhere near the reins of American power. But if he gets deleted by the intel agencies, through sheer leakage or through investigations and prosecutions, this is a clear indication that the government of the United States is no longer under what we might term civilian control.

It’s very unlikely that the surveillance powers of the U.S. government can be significantly limited or curtailed. In its current form they developed after 9/11, and none of the little setbacks—attempts to limit the surveillance state with legislation, the Snowden revelations—have really made a dent. We should regard this as an intelligence coup. We live in their world now. Perhaps the FSB cashiered Hillary; now watch the NSA delete Trump. Government by secret police—the Stasi, for instance—isn't exactly a new form, but it might be rather new to America.