The Crooked Man: When Cisgender Heteronormativity Is Outlawed 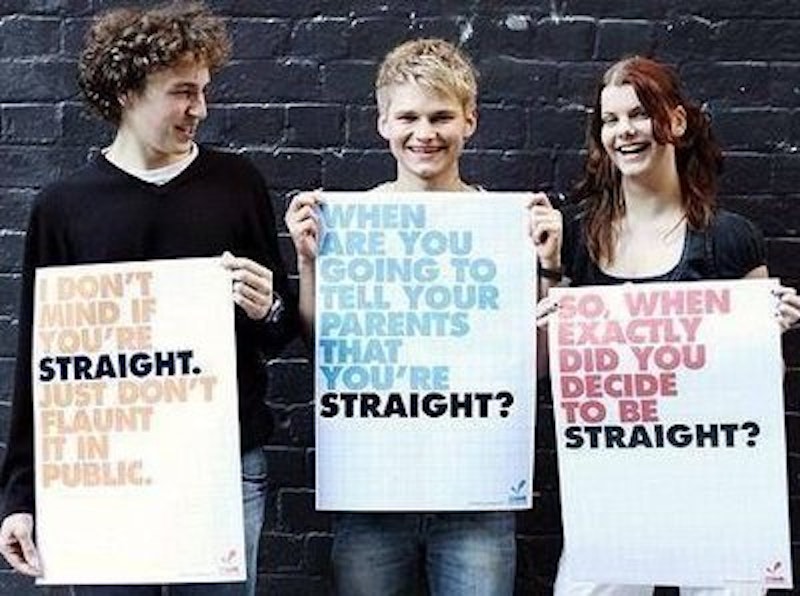 Filmmakers, musicians, actors and artists tend to be subversive, “pushing the envelope” to take on societal orthodoxy. This raises an interesting question: when liberalism has won the culture war, will liberal artists embrace conservatism?

I’m not talking about Susan Sarandon becoming a Donald Trump fan, or Alec Baldwin endorsing the flat tax. I’d just like to see some artistic subversion to rebel against the leftist New World Order. Increasingly, our culture is being flattened into a monochromatic herd of same-thinking, same-acting, trigger-warned and Borg-like social justice warriors. Someone has to stand athwart history and, if not say stop, at least drop their drawers.

A good immediate start would be a film adaption of a story that depicts a dystopian world where heterosexuality has been outlawed. People who are straight live in the shadows, and when discovered are operated on against their will, brainwashed, and reeducated to be gay. The story is called "The Crooked Man," and it was published in 1955.

"The Crooked Man" was written by Charles Beaumont (1929-1967) a horror and science fiction writer who wrote short stories and screenplays. His work includes The Intruder and 7 Faces of Dr. Lao. Many of his scripts were produced on The Twilight Zone. Beaumont died at 38 of what is now known as Alzheimer's disease.

"The Crooked Man" was first rejected by Esquire, which found it too controversial. It was finally published by Hugh Hefner’s fledgling Playboy.

The point of "The Crooked Man" is to protest discrimination against homosexuals. By creating a world in which heterosexuality is considered scandalous, Beaumont was condemning homophobia. Yet in 2016, when bakers are sued for not making gay wedding cakes and virtue-signaling liberals can end careers of those who dare dissent—not to mention men in women’s bathrooms and speakers banned and censored on college campuses—“The Crooked Man” has new and relevant meaning.

In Beaumont’s story, a handsome, anxious young man named Jesse slips into a nightclub. He takes a private booth, and is instantly hit on by two different men. The men have a code, fingers tapping across the stomach, to indicate that they want sex. Jesse turns them down, closes the beaded curtain around the booth, and dims the light. He’s waiting for a woman named Mina.

Jesse’s in love with Mina, but in this future society love between straight couples is forbidden. Artificial insemination is the law, and the sexes are strictly segregated. Hunting down heterosexuals, considered perverts, is official government policy: "These sick people must be cured and made normal," announces the platform of the majority political party. Jesse has learned to "pass" in this culture. He has conditioned himself to turn down sexual advances with tact.

Soon Mina shows up. She’s disguised, her flowing blonde hair tucked under a wig. Yet it’s not easy to hide the unique movements of a woman, and she and Jesse are found out. Jesse is quickly removed to a government van, which will take him for surgery and re-education.

Anyone who thinks that “The Crooked Man” can’t happen here probably didn’t foresee a world where a director of the ACLU is harangued for expressing doubt about her two young daughters sharing a bathroom with grown men.

What Hollywood filmmaker would produce “The Crooked Man” today? Nazis make great villains, and there’s more than a dose of totalitarianism on the modern left. When everyone you know is a good liberal and gender-fluid, who will stand up for the marginalized, cisgender, woman-loving crooked man?