Wrong from the Beginning

But later, they became libertarians. 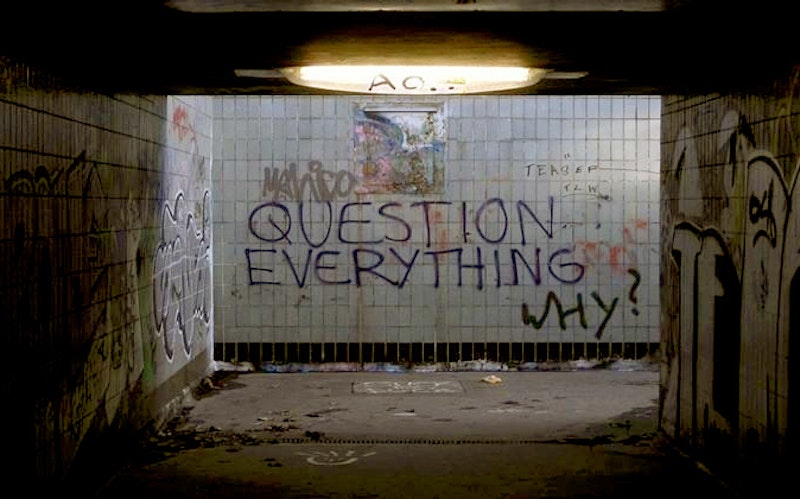 I griped about nihilists in yesterday’s column, but by contrast I always applaud skeptics. And skeptics, unlike the gullible, usually have tales of things they believed in the past but no longer do. In this respect, I find libertarians, unlike Democrats and Republicans, are usually skeptics. Few libertarians started out that way, which already gives you a hint that at least they’re thinking—reconsidering everything.

Despite constant studies suggesting that you can predict people’s Democrat or Republican leanings based on whether they’re nice people, control freaks or from a certain region or socioeconomic stratum, the best predictor of people’s major-party affiliation has long been the political affiliation of their parents. The apple doesn’t fall far from the tree—not even if, say, the kids go off to college and turn into more ardent Democrats who think their standard-issue Democrat parents are chumps for preferring Clinton to Sanders.

By contrast, most libertarians have some disillusionment narrative. The Democrats they thought in their youth were free-wheeling hippies started behaving like new-model authoritarians. Or the Republicans they thought were going to save the economy spent like socialists while cynically praising what’s left of the free market and shoveling some subsidies to their pals in major corporations. Something happened to make the average libertarian step back and think that the usual left and right philosophical answers assume too much about government’s ability to improve society.

This means that at any given point in recent history, beginner libertarians were probably coming from whichever faction, left or right, looked most disgraced at that time. And that’s what makes this year such a magical time to be alive. No one left in his or her right mind could possibly think the Democrats or Republicans have the answers America seeks—and so the ranks of libertarians can swell simultaneously with people from the left and right. This is probably for the best, keeping libertarianism from looking like merely an appendage of one or the other wing of American politics.

When the left and right parties appeared to offer liberalism and conservatism, respectively, reasonable people could disagree about which of those two parties to prefer. Some people are still half-heartedly playing that game even now. But when left and right degenerate to the point of offering socialism and fascism, respectively, reasonable people start to get tired of the lesser-of-two-evils game and decide to abandon both left and right. Those two factions had their day.

Indeed, even the libertarian movement, if swamped with newcomers who don’t fully understand libertarian principles—crucially, letting people do as they choose with their own bodies and property—could become corrupted by socialistic and fascistic thinking, torn between the opposing left and right poles that tear at the rest of the body politic. If that happens, we’ll have to become still more precise, still more unshakeable in our principles, abandoning the “libertarian” label to the mushy-minded and urging everyone to move on quickly to the anarcho-capitalist option, the complete abolition of government and any other property violations, full stop.

If we get people thinking in that forward-moving manner instead of the grim, unending seesaw of left-right-left-right, the logic of liberty may yet prevail in the long run. In the short run, there’s a CNN town hall at nine p.m. tomorrow night featuring Libertarian Party presidential candidate Gary Johnson. Watching that is an easy enough starter assignment for all of you.