He's not going to look this weak forever. 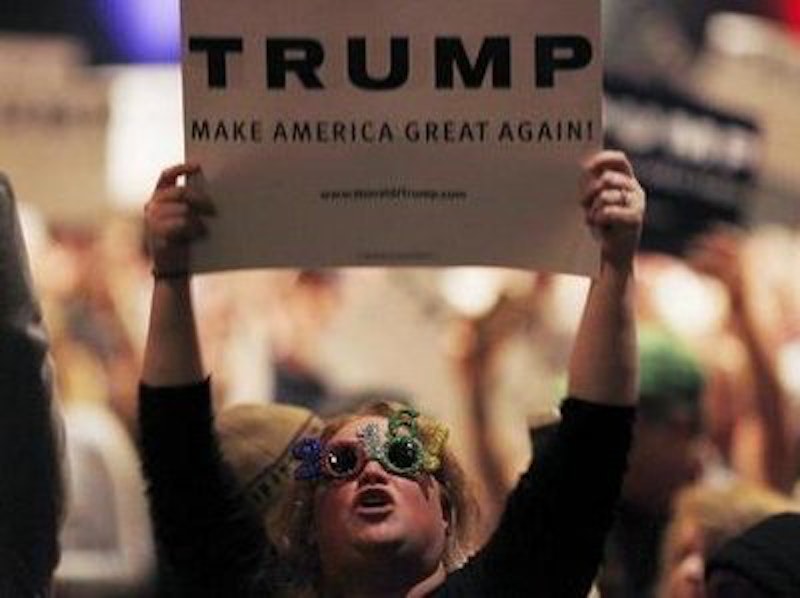 Donald Trump’s had an embarrassing six weeks. Since he clinched the GOP nomination in early May, his campaign has lurched from crisis to crisis. Republican leaders recoiled en masse when Trump made racist remarks about the trial judge overseeing allegations of fraud against Trump University. Revelations about the Trump campaign's poor organization and anemic fundraising are even more damaging.  Hillary Clinton is outspending Trump by about $116 million on ads in swing states, and polls show her pulling slowly but steadily ahead. In mid-May Huffington Post's rolling poll average had Clinton only about one point ahead of Trump. She's now up by more than seven.

If, like me, you think Trump is a fascist, racist, incompetent fool who’d lead the country to dystopian disaster if elected president, then his campaign woes are nothing but good news. The more Trump flails, the happier I am. If he continues on this path, he could well lose the election by 15 to 20 points.

He probably won't though.

Right now, Trump is setting expectations that are almost impossibly low. His campaign is in such disarray that there's speculation he might not even secure the nomination. What if the Republican convention decides to nominate someone else, despite Trump's clear victory in the primary? Could they do that? Would they try?

These aren't questions a nominee wants to have anyone asking. But they do have an upside. It's unlikely that Trump will be cast aside at the convention. But the fact that people are talking about it means that when Trump is nominated without fuss, he'll look surprisingly stable. He'll get some positive coverage, Republicans on the fence will take the opportunity to express confidence in him, fundraising will tick up, and he could appear like someone who might be president.

This is doubly true because the press ultimately has a stake in boosting Trump. At the moment, news outlets are having a great time kicking Trump for his corruption, incompetence, racism, and general awfulness—and more power to them, I say. But before too long, this is going to get old. Journalists don't want to keep saying, "Trump is going to lose" for six months; readers don't want to read, "Trump is going to lose" for six months. Eventually, people are going to start writing contrarian essays about how Trump isn't so bad and that Clinton is showing surprising weakness. There will be some poll that shows Trump within the margin of error, and that’ll get played up enthusiastically by news outlets eager for clickable headlines and a close race.

None of this is to say that Trump will win. At the moment, absent some major change in the race —a severe economic downturn, a Clinton indictment—he's probably going to lose. But November is a long way away, and many, many people have a huge incentive to analyze every micro-blip of every news cycle between now and the election. The very fact that everyone is piling on Trump now means that any sign of his resurgence will be immediately amplified. Everything that makes Trump look bad now is conspiring to make him look at least relatively good at some point in the future.

When Mitt Romney had a good debate performance in 2012, left pundits almost lost their minds in a hyperbolic fugue of recrimination and despair. It’d be great if we could avoid that this time around. Trump is scary, but the fact that he's going to gain some momentum at some point shouldn't be a cause for panic. Trump may find it in him to do even a bit worse than he's doing at the moment, but by the nature of things, as the campaign goes along, at some point, in some way, he's bound to do better.