The Constitution Is Pushing Us Over the Fiscal Cliff 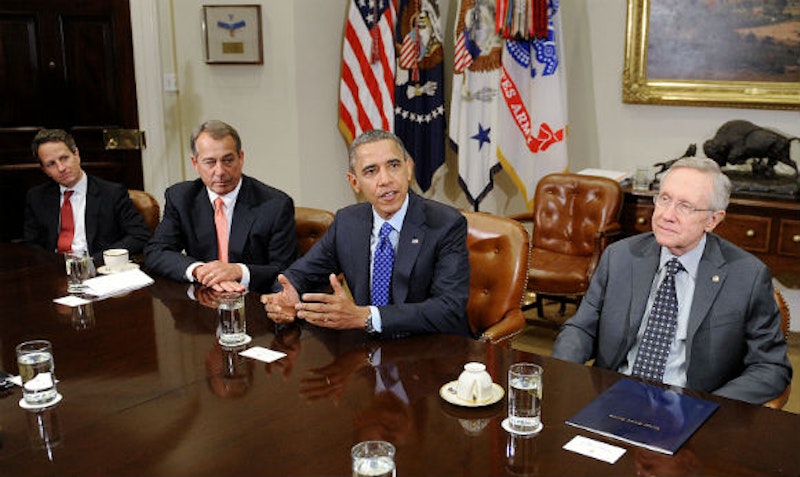 Last Thursday, Matt Yglesias, with some frustration, tweeted the following: "I hear in some places, after an election you just govern and then you either win the next election or else you lose."

The point here for Yglesias is presumably that the Republicans should stop being obstructionist assholes. The Democrats won the presidency and picked up seats in the House and Senate. So Republicans should get out of the way and let Obama pass the policies he ran on, which in this case would mean letting the Bush tax cuts expire on those making over $250,000, and then moving on to other business.

Again, the implication here is that the Republicans are willfully perverse idiots intent on destroying our democracy. And far be it for me to disagree with that assessment.  But I think Ygelsias' tweet actually gets at a more fundamental issue: our government doesn't work very well or very democratically. In fact, it’s designed not to work very well or very democratically. It's fine to blame Republicans for the fiscal cliff quagmire, but I think we need to blame the Founding Fathers too.

As Yglesias says, in most countries, people go to the polls and vote for a party and a platform. They elect a legislature and an executive at the same time. Then the party that’s elected puts its policies in place just as promised. If they work, it can look forward to reelection; if not, they're booted and someone else gets to try.

In the US, things don't function that way. The Founding Fathers were afraid of government concentration of power, so they divided power between different branches. The goal was to make it difficult for government to do much, and in that goal they were fairly successful. An elected president in many cases cannot enact his policies. Instead, he has to negotiate with those who lost the election.

The result is often paralysis and a lack of accountability. Elected officials can't actually enact their policies, and so it's difficult to hold them responsible for their time in office. It also encourages everyone to be extremely vague about what they're actually going to do, in the hope they can blame anything bad on the other guy. Mitt Romney had a hell of a time pinning the lousy economy on Obama. He also, and not unrelatedly, resolutely refused to say what he would do himself.  So it's not much of a surprise that, after a campaign where many economic issues were obfuscated, no one can agree on economic policies going forward (except maybe that taxes on the very wealthiest are going to have to go up—which is the right thing to do but is hardly a cure for all of our economic ills).

This sort of impasse is in general quite bad for progressives. Progressives want the government to work., so a system which is designed to be dysfunctional is a major barrier. But more than that, a lack of accountability alienates people from government. Obama's promises of hope and change foundered in part on his own failures. But there's no doubt that if he had in fact been able to enact what he wanted—a bigger stimulus, for example, or single-payer health care, or immigration reform—he'd look a lot more hopey and changey than he does today.

The enthusiasm and passion of 2008 got squandered in no small measure because the American system of government is designed to squander enthusiasm and passion. Again, this is no accident. The Founding Fathers didn't trust the people any more than they trusted the government. They were leery of democracy, and didn't want the excitable rabble to have too much influence in the halls of power. American's cynicism about the political process is entirely justified; that political process is designed as much to stifle them as to give them a voice.

All of which partly explains why the US remains a less progressive nation than many other Western industrialized powers. It's not that Americans are less progressive than their neighbors. It's that our government is deliberately intended to make it difficult to translate popular will into government action. So the next time you indulge in the all-American sport of hating your Congress, spare a fillip of scorn for our Founding Fathers and the American exceptionalism of gridlock and lack of accountability for which they stood.