The Silliness of the Secession Crazies

Reagan will rise from the grave before a state leaves the Union. 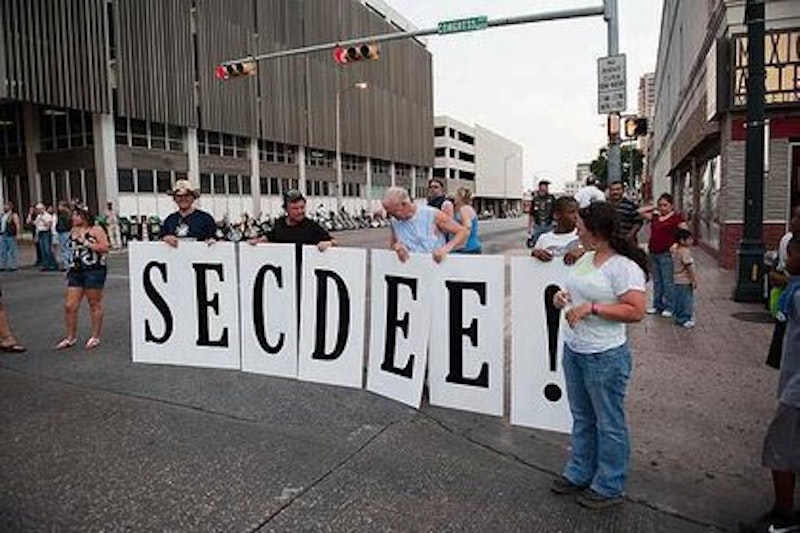 There’s a movement underway that was prompted by President Obama’s reelection. Gov. Martin O’Malley (D) and Obama may not have noticed, but 3916 Marylanders have signed electronic petitions to have the state secede from the Union. And the twist is that similar petitions in all 50 states have originated on the White House’s own website, WhiteHouse.gov, under the heading of “We the People,” which allows citizens to launch petitions and register their gripes on a variety of issues. So far, 703,326 Americans have used the site to blow off steam, mainly against Obama and the federal government and whatever the bellyache du jour is.

The site promises that any state that registers 25,000 votes or more on a given issue will get a serious review by a White House staffer. In that case, Maryland is woefully behind the curve. It must register 21,084 of the 25,000 by Dec.1 to qualify for consideration by the White House ministers of influence. The Maryland petition was initiated by David D., of Lutherville, Timonium, the state’s first signatory.

So far, seven states, a majority of them red, have crossed the threshold for review—Louisiana, Texas, Alabama, Florida, North Carolina, Georgia and Tennessee. They are among the 11 states where slavery was legal that seceded from the union in 1860-61 during consideration of the 13th amendment. You’re correct if you detect a pattern here.

And while we’re at it, five states were created as a result of secession from other states—Kentucky, Tennessee, Maine and West Virginia. And, of course, the most bodacious of them all, Texas, which split from Mexico. On the global map, nations come and go through secession and its corollaries, annexation and partition, mainly because of war and civil strife.

Petitions to secede are familiar currency in Maryland to General Assembly hobbyists. They appear periodically in the legislature as a source of amusement or, alternately, bewilderment, to raise the issue of secession of the nine Eastern Shore counties to form either a separate state or to join with a Delaware county to form a mythical state called Delmarva, kind of a redneck Brigadoon.

Such petitions were regularly introduced by State Sen. Robert Bauman, a conservative Republican who impishly championed Eastern Shore independence to break urban (Baltimore) dominance of the nine rural counties in the General Assembly. In turn, the late Sen. Clarence M. Mitchell III, the civil rights activist from Baltimore, would retaliate by threatening to campaign for Bauman on the racially-charged Eastern Shore. (As an asterisk to history, it is noteworthy that Bauman was elected to Congress from the First District and was arrested in a Washington men’s room for soliciting sex from a teenage boy. Bauman, admitting an addiction to alcohol, was defeated in the subsequent election.)

The most recent petition for Eastern Shore withdrawal from the state was proposed in 1998 by two Republican senators, Richard F. Colburn and Lowell Stolzfus. Two other early petitions occurred, understandably, around the time of the Civil War. The political consultant, Joseph Napolitan, once observed that he had conducted polls in every state in America and found no other area as conservative as the Eastern Shore of Maryland.

To date, 703,326 citizens from the seven states have signed petitions to have their states withdraw from the union. Of the seven, the most signatures—115,000—have originated, naturally, in Texas. But in a thunderclap of reality, Gov. Rick Perry (R) has experienced an epiphany. In 2009, at a Tea Party rally, Perry actually encouraged Texas’ secession, presumably as a run-up to his crash-and-burn presidential candidacy. Today, he is whistling a different melody: “The governor believes in the greatness of our union and nothing should be done to change it,” Perry’s office said in a statement. What a difference a defeat makes.

Much of the agitation for secession is originating in states that are controlled by Republican governors. And activity on the White House website has accelerated significantly since Obama’s reelection on Nov. 6. But the governors, despite their personal feelings and the sensibilities of their constituents, realize that they have a good thing going. They know which side their budgets are buttered on.

“Taxes,” Justice Louis Brandeis observed, “are the price we pay for a civilized society.” American taxpayers send their money to Washington and in return they get highways, bridges, hospitals, Medicare and Medicaid money, school and college funds, defense installations and an array of other programs and structures that are paid for with federal largess.

Baltimore’s Johns Hopkins University and its affiliated institutions, the hospital the Bloomberg School of Public Health and the Applied Physics Lab, for example, receive the second highest amount of federal research funding in the country, more than $600 million a year.

Together the federal government sends more than $3 trillion a year back to the states, or about $10,548 per person. The top five state-recipients of federal funding are: Virginia, Maryland, Alaska, Kentucky and New Mexico. The bottom five are: Minnesota, Oregon, Wisconsin Nevada and Utah. Much of the federal spending in Maryland and Virginia goes to support the huge federal presence in the two states adjoining the nation’s capital, the District of Columbia.

The political demographics of the new electoral map tell the story of who is supporting whom. In the new order of growing populations among Hispanics, blacks and Asians, Republicans control geography while Democrats are in charge of population. And while the red states of the Old Confederacy are venting their anger at the federal colossus (and probably a black president as well), it is the blue-state populations that are picking up the tab by sending more federal boodle to support Republican states than they are getting in return for themselves.

America has become a virtually borderless nation with a highly mobile population. State border lines mean very little to airplanes, trains, buses and cars using inter-state highways, all of which are regulated and supported financially by the federal government. People follow economic activity just as malls and condos follow the installation of roads and sewer lines. Build them and people will come. And it’s the federal government that binds all of that diversity and mobility together.

The first impulse is to say let the crazies and the malcontents withdraw if they so choose. But it’s a waste of breath because they’ll soon be back when they realize what they’d be losing. The United States of America is not likely to fall apart any time soon.