Keys To The Kingdom

What you’ll need to excel in the political-cultural punditry industry. 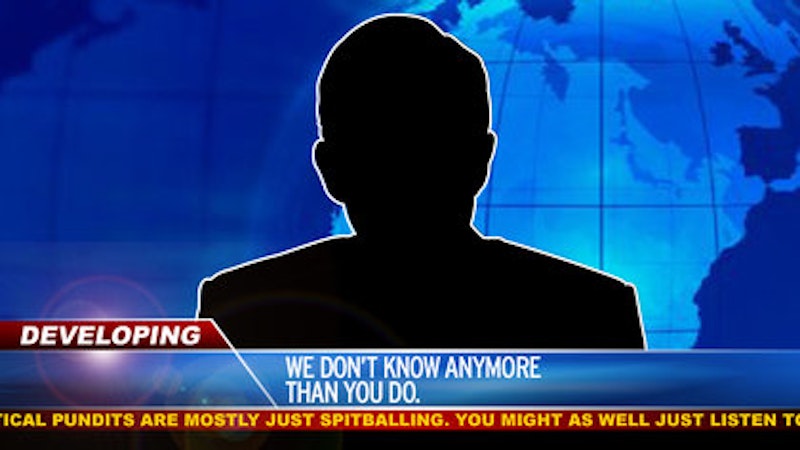 I don’t care how minor or seemingly inconsequential these are, even if you just, say, guest-appear on your cousin’s tri-annual green energy podcast as comic relief, get booked somewhere, saying something, even if you have no idea what you’re saying and you contradict what you said last time even you appeared anywhere.

A catchphrase, accessory, or look that most observers would identify as quintessentially you. If you can’t identify at least two or three quirks of your own in the next five minutes, you’re hopefully outclassed and need to return to your comment-section trolling career.

Facial hair lets the reader know that you are serious, and meticulous, because if you weren’t seriously meticulous, there’s no way you’d let anyone take a picture of you and throw it on an editorial page or a hyper-partisan blog alongside your trenchant political commentary on matters of the day. No one wants to hear some brain-dead hippie’s opinion of Chris Christie, unless that brain-dead hippie went GQ when it was time for his close-up. Feel me? Editorial writers of the fairer sex: you don’t need facial hair but, yeah, we have to get the sense that you’ve fused with the hair on your head some, or paid somebody else to do that.

Or, in laymen’s terms, “juice.” You know: books you wrote, boards you chaired, fellowships you earned, foundations and campaigns you served as a consultant, publications for which you’re a senior editor, or editor-at-large, or editor-en-garde. Remember, this is politics: the truth is elastic, so presenting yourself as the host of a talking-head web series but leaving out the “web” aspect isn’t exactly lying, and instead of touting your teen Communist/steampunk zine Comrade!, make mention of your “lengthy tenure as the editor of a respected alternative lifestyle journal.”

What’s important to understand about punditry is that most people hate pundits, and the political process, and talk about the political process. Most people can hang with punditry when punditry is couched in jargon they can understand: intellectuals appreciate politics viewed through a theatrical lens, Sports Center viewers will cosign language that frames Beltway showdowns in Final Four terms, statisticians will be all up on your jock if you praise Nate Silver or pretend to be Nate Silver, musos will swoon if you pepper your commentary with references to Boomer rock workhorses.

This is important, because if someone is talking about you, someone you don’t know, that middle initial lets them use your name like a weapon, like a pair of nun-chucks, with the initial being the chain or hinge. The presence of that initial might mean the difference between this imaginary stranger winning or losing an argument about soybean farming in the Midwest in 2050. So if you were born without a middle name, either get your name changed legally or make some shit up.

No, not metaphorically. I’m serious. Beat a drum! Go places and beat a drum. Join Occupy drum circles and go out on Iron John retreats and sit in the next time the Boredoms do one of their mass events. Beat a drum at Bonnaroo, at Burning Man. Beat drums in sweat lodges. Beat a drum on the street for change. A lot of people will say you’re crazy, and you’ll be attacked, maybe crippled, but beating that damned drum—maybe buy a couple of drums, and switch ‘em out from time to time—will bring you into contact with regular folks wrestling with regular problems, a population most of our punditry fails to connect beyond a strawman understanding of “the public.”

If you do this, and in so doing manage to make more than 8000 or so total strangers aware that you are seriously doing it, you can probably ignore all the other advice.