The Congressman Will Tie His Shoe Now

Transformed nerds like Aaron Schock are guilty until proven innocent. 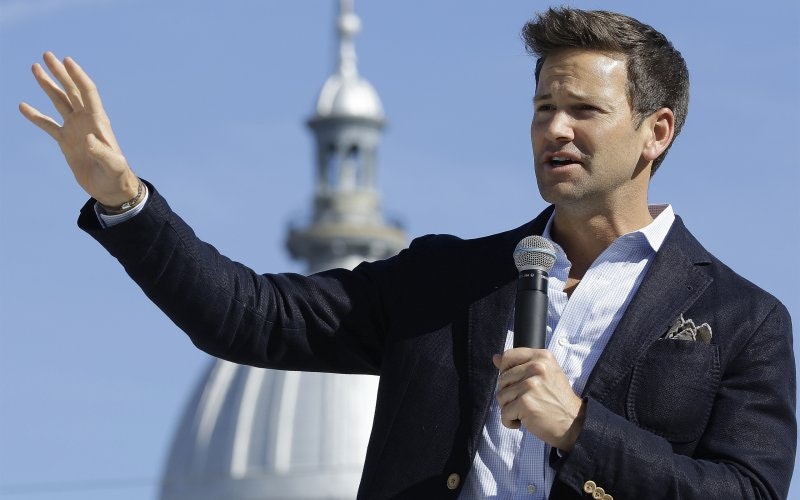 At age 19, Aaron Schock was elected to the school board; he’d just graduated from college. At 23 he was elected to the Illinois legislature. His opponent was a four-term incumbent, but the kid kept knocking on doors. At 27 he became a congressman. At 29 he posed half-naked, trying to find his shoelace. Wait a second.

Look at those lats. The abs. Everything. “There was no need for retouching,” said the Men's Health writer who interviewed Schock during the 2011 photo shoot. The writer sized up Schock versus pro fitness models. “Congressman Schock’s physique is definitely in the same league,” he said. The Congressman got there scientifically, through P90X and an applied life regimen. As Men's Health tells the story, he started out a “scrawny, sports-averse kid,” but in college he didn't like where his body was headed. Steps followed. Now here he is, under the lights, every crevice in place.

Yet he shit his pants financially. Bookkeeping wise. The money amounts are piddling, it's what he did with them. Really, back in Illinois he logged some much bigger numbers on early real estate deals. But this time Schock made a spectacle of himself. The Congressman paraded the money—that office with the feathers, the Zegna suit. And he travestied proper accounting: CNN's Drew Griffin snorted about “the congressman's own sloppy finance records.” Here's one that gets me: Schock put down a $3,425 deposit for a private plane ride, but he reported the reason for the spending to be “software” because the plane belonged to a big software executive. That's almost a joke, like he's playing with the form.

The congressman with the delts was one of the few teenagers to learn ledger accounting and care about it, and he is one of the few politicians to get touchy about the word “normal.” Back in 2004, a reporter wanted to know how he felt about missing out on Friends and rock shows. "Who is a normal 23-year-old?” the candidate demanded. He brought up the troops. “Is an average 23-year-old in Iraq fighting for our country?” he asked. Then he fenced: “To suggest I'm not an average 23-year-old, you'd have to define what a normal 23-year-old is."

The Aaron Schock of 2004 was running for the state legislature. He'd been elected to Peoria's school board in 2000, and a couple of years later he became its president. Like now, he was a pleasant and soft-spoken young man who was obviously intelligent. Busy, of course. The reporter who triggered the “normal” discourse had to shake her head: “If there's a downside to Schock's ambitions, it is that he has sacrificed youth for politics, even taking school board phone calls in movie theaters.” Nothing too awful for a 40-year-old, but odd for a youngster, I guess. “Friends tell him he doesn't know how to have fun,” the article says, “but he insists he's having a great time.” I'd be willing to believe him, except for how things turned out.

A transformed nerd is always guilty until proven innocent. Just in the past few years, around when he publicly went looking for his shoelace, the congressman has become very serious about not being serious. Like that nut Barney in the sitcom, he wants to be legendary, an extreme-gusto guy. Hence the Instagram photos that put people's backs up: Schock with Buddhist monks, Schock parasailing. Living it up. Not in any way that involved alcohol or sex, but fairly expensive ways. The suggestion was that he took experience off the top shelf; he got the good stuff.

“If his behavior is any guide, the man believes that the people of Illinois’s 18th congressional district have hired him to serve not as a dull public servant but as their very own nationalized celebrity,” complains Charles C.W. Cook at National Review Online. I bet he's right and Schock was positioning for national breakout. But the mixed-up boy was also preparing to torpedo himself. He decided that an off-duty Schock had to be established for the public; they had to be shown that the child congressman had a life. The result was this top-shelf parade of beaches and biceps and his wide mouth laughing. Soon enough he was decorating his office, making it look like a magazine spread he had seen. At this point his self-destructive intent became clear. Parasailing is obnoxious but accepted. Pheasant feathers and raspberry walls: no.

A reporter noticed, of course, and an aide said the paper could do a story about it. Then the aide had to renege. “He’s happy to talk to you, just not about the office,” the aide said. “I’m really sorry and want you to know this is not fun for me.” Schock was now hell-bent on damage control; apparently, he had never thought people might see his office. This case of brain-stop is a symptom. The subject of his life, as opposed to his career or physique, is one that shuts down the congressman's mind. Sexuality is one reason (I take the conventional view of pheasant feathers and turquoise belts, and of the closeted life), and I bet there are many others.

Now he's done in because he padded his miles for gas money. Nothing clever here, it's obvious as shit on white undies. The Congressman, former teen bookkeeper, can appreciate what a botch that is, along with the clogged bowl of other botches that make up his official accounts. This is his way of being filthy, just as scientific body priming is his way of being vital—God forbid the guy should just play softball. The Katy Perry concert and the rest aren't his idea of fun, they're his idea of what other people consider fun, and giving it to them is his way of being with them. He's good at it too, which is why he could raise so much money while throwing out a minimum of red meat. (This Republican publicly worries about Third World toilet access, and he talks about “long-term strategic thinking” like a Dukakis liberal.) Massages and custom-rolled cigars for donors, concerts for interns, and either way people are smiling in the proximity of Aaron Schock. The poor man is one of those modern creatures who has turned his being into a set of dotted lines. He has separated and refolded his segments and come up with what he thinks is the ideal arrangement. But he doesn't really like being this way and he wants to stop, and he has finally arranged for the rest of us to stop him.