Maryland Day is Fraught with Politics

A rarely marked local holiday, it touches on the First Amendment. 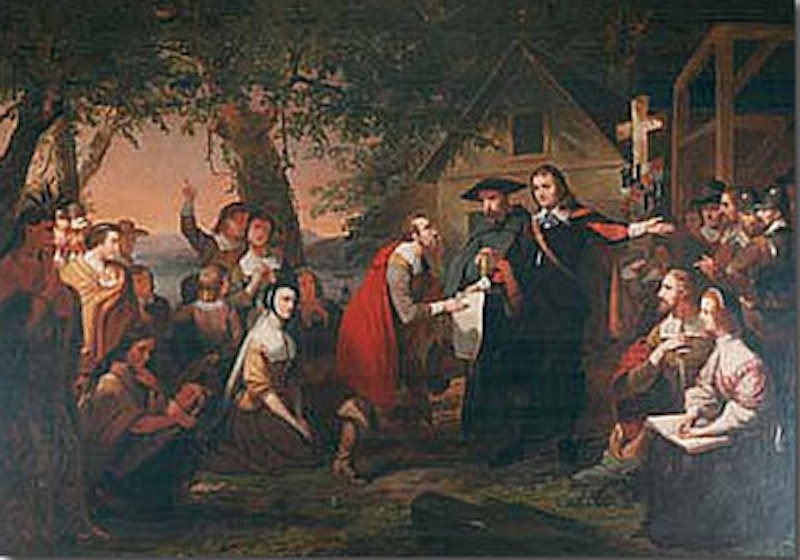 Maryland Day is a ceremonious chuckle to religious toleration and freedom. March 25, a local holiday without a Hallmark card, also pays tribute to the day religion and politics were convenient though lethal handmaidens and tolerance was honored only in the breach. Consider these words from the Act of Toleration of 1649:

“And whereas the enforcing of the Conscience in matter of Religion has frequently fallen out to be of dangerous consequence in those Commonwealth where it has been practiced, and for the more quiet and peaceable Government of this Province, and the better to preserve mutual love and unity amongst the Inhabitants here, Be it therefore also by the Lord Proprietary with the advice and assent of this Assembly, ordained and enacted, except as in this present Act is before declared and set forth, that no person or persons whatsoever within this Province, or the Islands, Ports, Harbors, Creeks, or Havens thereunto belonging, professing to believe in Jesus Christ, shall from henceforth be any ways troubled, molested, or discountenanced, for, or in respect of his or her Religion nor in the free exercise thereof within this Province or the Islands thereunto belonging, nor any way compelled to the belief or exercise of any other Religion against his or her consent, so as they not be unfaithful to the Lord Proprietary, or molest or conspire against the civil Government, established or to be established in this province under him and his Heirs.”

Squirm, wince, grimace or smirk, if you wish, at the inherent hypocrisy and outright deception of good intentions. But those primal words, twisted as they may be, are often regarded as the touchstone for the First Amendment as well as a step toward separation of church and state. For in this age of ecumenism, of gurus and Zen masters, of warlocks and witches, of same-sex weddings and of do-it-yourself religion, look back upon that quote from the Act of Toleration with a great deal of toleration, with amusement if not benign good humor. It gets laughs like a Jon Stewart parody.

March 25, Wednesday, is the 381st anniversary of the founding of Maryland as a religious sanctuary for English Roman Catholics escaping Anglicanism. The Ark and the Dove deposited their passengers, about 150 of them, on St. Clement’s Island, now Blackistone Island, where Fr. Andrew White, S. J., celebrated the first Roman Catholic mass in the new settlement. The date was formalized in 1903 as an official observance to honor Maryland’s history.

Now, as then, freedom, in its broadest sense, depends upon which political party, or king, is (was) in power. And it is at that delicate point that politics and religion appear to intersect and become almost indivisible and God’s work here on earth takes on the appearance of political mischief. For in the 1600s, the state, meaning the ruling powers of England, defined religious beliefs with impressive efficiency and zeal. Lucky for us, the court system has replaced royal edicts and the Tower of London.

Like the Act of Toleration—celebrated as the first blow for religious freedom in the new world—the war on Obamacare is basically a religious war. It’s being waged by fundamentalists of the Republican right and by Catholic nuns and employers who would defend their rights at the cost of others’. Whenever freedom is expanded for one group it is diminished for another.

Sen. Ted Cruz (R-TX), whose father is something of a preacher, is using rare Senate parliamentary tactics to help religiously affiliated colleges deny birth control coverage and another to block financial aid to gay and lesbian student organizations. Sex-trafficking legislation is sidetracked by Republicans who insist on including expansive anti-abortion language. And the biggest divide of all is evolution, settled 150 years ago, from which most religious beliefs flow. Religion bullies view the universe as Biblical and their opposites lean on scientific evidence. Straddlers say the two are not mutually exclusive.

In the Maryland General Assembly a couple of years ago, opening prayers had to be edited to assuage Jewish members. They were upset by the frequent appearance of Christian clergymen who invoked the name of Christ in their benedictions as if the religions of Jesus, Moses and Mohammed have different gods. And in Montgomery County, Muslims regularly petition school officials for parity with Christian and Jewish holiday school closings.

Not much has changed in 400 years. History has backfired, ignoring the lesson that repeating it means wallowing in it. Maryland was established in 1634, and after many minor holy wars between Catholics and Protestants (mainly Anglicans), the Act of Toleration was adopted 15 years later. But Maryland was a laggard on separation of church and state, eclipsed by Rhode Island which established the durable partition in 1639. Puritans and Anglicans skirmished regularly for supremacy, and it was not without concessions to the Puritans that the Act finally was adopted.

Contemptuous of individual freedom, the head that wore the English crown dictated religious demands to subjects at home and abroad. State and church were indistinguishable. And through various machinations and conflicts, the crown changed heads frequently. All the while the Anglican Church remained (and is) the official church of England.

Barely 10 years after the Act was signed, the first Jew in Maryland—Dr. Jacob Lumbrozo—was arrested in St. Mary’s City under the Puritan regime after being tricked into a theological argument on a Sunday. He was charged with blasphemy. For the Act Concerning Religion conveniently did not apply to Jews. What’s more, freedom of worship was guaranteed for all Trinitarian Christians (those who believe that God is a three-in-one being, Father, Son and Holy Spirit) but sentenced to death anyone who denied the divinity of Christ.

In 1654, some Catholics who were caught in a political squeeze were disenfranchised and a new and fungible Act of Toleration was adopted that withdrew religious freedom and protection from both Catholics and Anglicans. And by 1692, the Church of England was declared the official Church of Maryland, and under the state’s first Constitution, the governor also served in a dual role as the Episcopal bishop of Maryland. In 1718, all Catholics were disenfranchised. And in 1740, they were ordered to pay double taxes.

So in the late 1700s, the Huguenots, in another of many holy wars, staked a territorial claim on Southern Maryland and began pushing the Catholics north. Finally, many Catholics fled to the hills of Western Maryland and settled in the safety of the Catoctin Mountains around Frederick and Emmitsburg.

It wasn’t until 1826 that Jews could vote and hold public office in Maryland, largely because of the determination and efforts of a Catholic member of the Maryland House of Delegates, Thomas Kennedy. Kennedy was defeated for sponsoring the so-called “Jew bill,” but after one term out of office he was reelected. And in 1969, 143 years after Jews were given the franchise, Maryland got its first (and only) Jewish governor, Marvin Mandel.

It’s amusing to review and recall Maryland’s heritage and to consider the simple, uncomplicated intolerance of the early days of the state. It’s both accurate and charitable to observe that more irreligious acts have been committed in the name of religion that we care to admit.

It is also instructive to recall that heavily Catholic Maryland, where religious freedom was born in the new world, also produced the world’s most famous atheist, Madalyn Murray O’Hair. Her Supreme Court lawsuit, Murray vs. Curlett, led to the end of Bible-reading in Maryland’s public schools in 1963.

Maryland Day, and the state’s history, is memorialized in ways that recall the religious sensibilities of its early days. The Roman Catholic Archdiocese of Baltimore is the nation’s primal see, the Church’s first diocese in America. And a Maryland Bay at the National Cathedral in Washington commemorates the Act of Toleration in all of its inglorious injustice. There is irony here in that both Catholics and Anglicans (now Episcopalians), those early religious rivals, memorialize Maryland in different ways, both, no doubt, acceptable to a tolerant deity.

And most of all, a reminder to Gov. Larry Hogan (R), a Roman Catholic, that he is also the dues-paying Episcopal Bishop of Maryland under the state’s first Constitution. That is truly toleration.