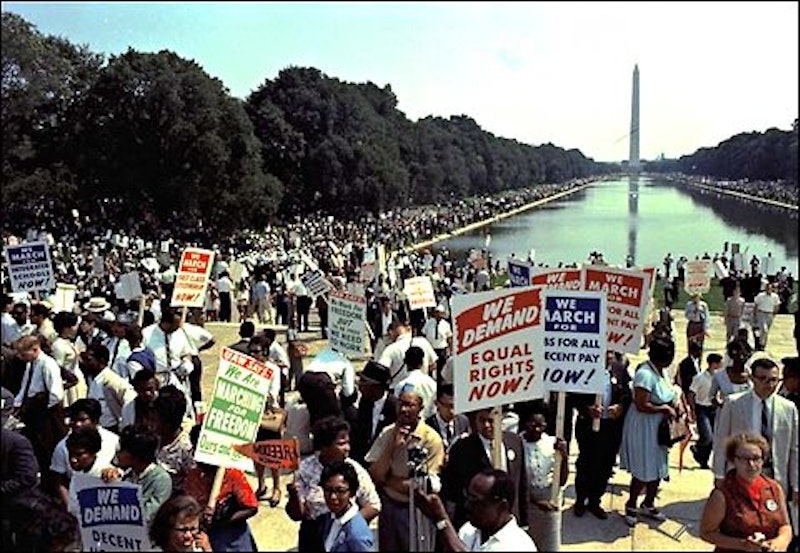 But was it really? Or is its success, in the public imagination, overstated?

That question is important in part because not just the tactics, but the success of the Civil Rights Movement is at issue when people criticize the current civil rights struggle, Black Lives Matter. You can see that in a recent Washington Post piece by Barbara Reynolds, a veteran of the Civil Rights movement.

Reynolds characterizes BLM as a "motley-looking group" and criticizes activists for wearing baggy pants, listening to rap music, and being "confrontational and divisive." She also argues that BLM would benefit from closer ties to the black church, which lent the Civil Rights Movement "an innate respectability." Black Lives Matter, she concludes, needs to look to elders like Oprah and Al Sharpton if it’s going to be successful.

But it wasn't all successes. One of the central battles of the Civil Rights movement—desegregated schools—was basically lost. Michael Brown's school in Ferguson, for example, was deeply segregated, and it wasn't an aberration in Missouri or the country as a whole.

The Civil Rights movement didn't change minds as much as we like to tell ourselves. Reynolds says that the movement used a "loving, nonviolent approach," and that that, "is what wins allies and mollifies enemies." But Civil Rights protests, despite their (not always perfect) commitment to nonviolence, were not seen as harmless or non-threatening. On the contrary, many people then and still saw the Civil Rights marches as undermining public order and safety. Dog-whistle rhetoric around law and order helped Nixon get into the White House. And that rhetoric, over time, became the basis for our massive, decades-long incarceration binge and the growth of the police state that Black Lives Matter is fighting against.

Black Lives Matter is not in a position to adopt the politics of the Civil Rights movement in part because those politics were in the long run ineffective. The Civil Rights Movement leaders embraced nonviolence as a way of showing themselves to be law abiding and worthy of equal rights. But the mainstream white response has been to claim that it’s not skin color, but criminality, which is being policed. The state is built on respectability politics—on the idea that if you’re not perfectly nonviolent and respectful at all times, then you deserve any punishment, torture, and violence that the state chooses to mete out.  The Civil Rights movement said, "We deserve equal rights because we are respectable." And the prison system responded, "Okay, we'll treat respectable black people well, but if anyone falls from perfect respectability (by, for example, being black)—we'll bring the hammer down."

Reynolds acknowledges some of the limits of the Civil Rights movement. For example, she praises BLM for including women in leadership and focusing on women's rights and experiences in a way that the Civil Rights Movement often didn’t. In that case, and in others, Black Lives Matter is different from the Civil Rights movement not by accident, but because a deliberate choice has been made to try to learn from the mistakes of the past, as well as the successes.