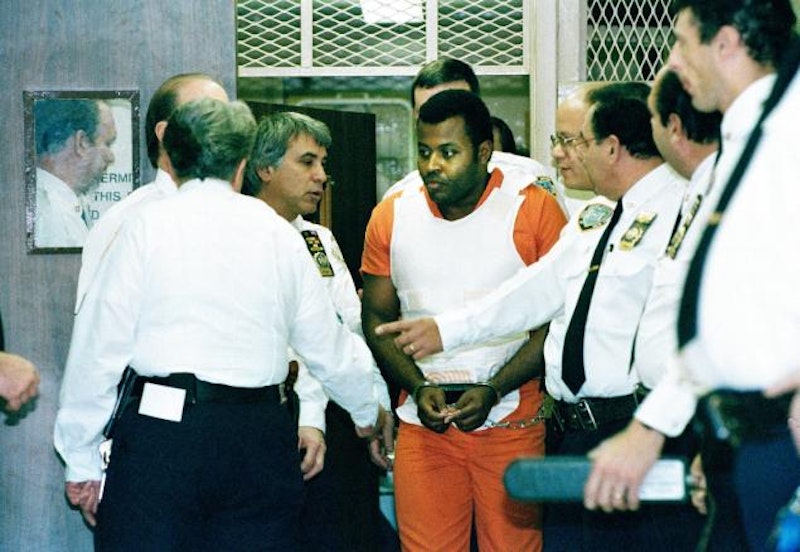 Remember Ferguson—Colin Ferguson, that is. This year was the 20th anniversary of the conviction of the lunatic who, two years earlier, had killed six people on the Long Island Railroad. And it’s significant, I think, that he’s remembered primarily as a lunatic—not as a black man on an anti-white crusade.

The left is now filled (almost exclusively, it sometimes seems) with hair-trigger liar-propagandists happy to seize any opportunity to argue that the media constantly downplay crimes by white racists and play up crimes by blacks. On the contrary, I’ve worked in TV news at more than one network and can attest that they’ll go to extraordinary lengths to make minorities look good.

I’m reminded, for example, of the time I overheard two producers talking about finding information about a corrupt judge—but, alas, the corrupt judge was Hispanic, so they agreed it was best to keep looking until they found a similar case involving a white non-Hispanic. Wouldn’t want to make a member of an ethnic minority look bad if it can be avoided.

Don’t get me wrong. TV news people aren’t nearly bright enough to be truly ideological. They just tend dutifully and mindlessly to do whatever liberals would prefer.

In the case of Colin Ferguson, he was mocked for a colorful array of likely-schizophrenic statements and behaviors, and you can lament all you like the fact that the coverage of him—not to mention the treatment of him by the legal system—was not very sensitive to his obvious mental health problems. But what the media did not do, and easily could have, was constantly harp upon the fact that Ferguson opened fire that day because he hated white people.

In the years before the attack, he screamed things at his class at Adelphi University such as, “We should be talking about the revolution in South Africa and how to get rid of the white people,” and, “Kill everybody white!” He vowed to his fellow students, “The black revolution will get you!” Virtually no one responded afterwards by suggesting that we need to, say, get rid of affirmative action to stop encouraging such attitudes or examine what Ferguson’s mindset says about the black community.

And to be clear: that’s good. Because he was above all a lone nut. It happens.

Of course, there were at least two people eager to make Ferguson look like an embodiment of blacks-in-general—his radically left-wing defense lawyers, William Kunstler and Ron Kuby, who suggested that Ferguson had been driven insane by understandable “black rage” at white racism. Think how many crimes would go unpunished, and the floodgates of bloodshed opened, if that became an accepted, winning defense. Then think of the reprisals.

Then be glad the media is just individualist-liberal enough to prefer talking about specific lone nuts instead of talking about the race war for which the left-liberals perversely long.