Ramesh Ponnuru Is Confident for No Good Reason

Dummy, the GOP just fell off a roof. 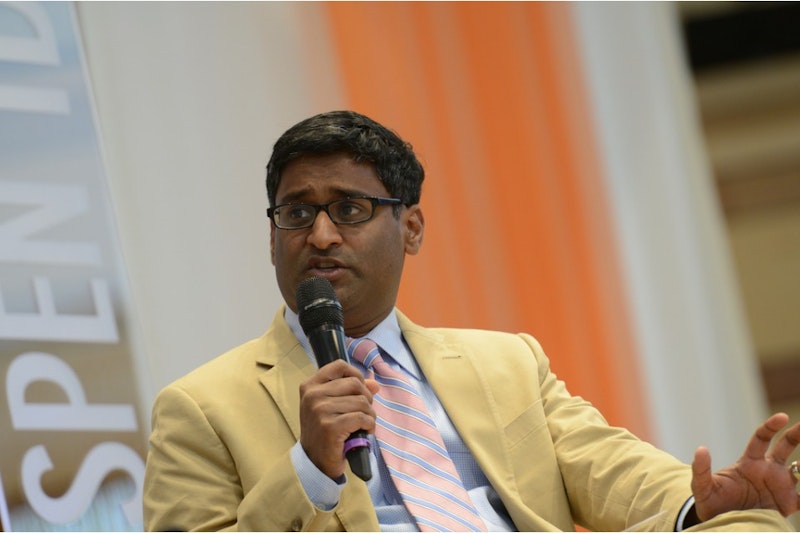 You know who's calm and collected? Ramesh Ponnuru, right-wing pundit of reasonable mien. Being a reasonable conservative, he doesn't fly into rages and work up detailed fantasies that he mistakes for the news. He just misses the point. That's his stock in trade, and now he brings it to the Trump phenomenon. “This too shall pass,” Ponnuru writes, and “I can’t get worked up about him.”

On Trump: “He is not going to be president. He’s not going to be the Republican nominee. He’s probably not going to hurt the eventual nominee’s chances of winning.” The first point, sure. The second point, okay, the odds are against him. The third point, well, I wouldn't say “probably not,” not just like that. Some back-up is needed here, and what Ponnuru supplies strikes me as inadequate. For instance, “Because the decisive Republican presidential primary voters are a pretty sober-minded bunch.”

There he outdoes himself. He misses the point of the past 15 years. Republican primary voters chose George W. Bush. So did Republican office-holders, party officials and donors. The whole party looked at that man and figured, yeah, he should be president. Republicans stopped being sober-minded a long time ago. The party is dominated by fantasy and caprice. The thread runs back, at least, to Richard Nixon drinking in his office and listening to Victory at Sea as he bombed Indochina. After the retirement of James Baker and George H.W. Bush in the early 1990s, this streak in the party temperament broadened and deepened and picked up unearthly hues. Right now it looks a lot like Donald Trump and it's in a bad frame of mind. The James Baker streak looks like Jeb Bush. The two tendencies together suggest an angry cobra and a gerbil that's stalling for time.

But Ponnuru rests easy. After all, he reasons, a situation like this hasn't occurred before. Therefore, it's not happening. “Because major parties don’t succumb to sudden hostile takeovers,” he says loftily, and “Because parties don’t pick nominees who have never run for anything before, unless they happened to be the victorious Supreme Commander of the Allied Forces in World War II a few years earlier.” I remember when losing the New Hampshire primary meant you didn't get elected president. I remember when being black meant you didn't get elected president. I remember, to rephrase the last point, when experts said a coalition of women, minorities and college-degree liberals was the same hand McGovern drew, and that it couldn't win. That was 2007, and we were hearing why Obama was a losing candidate. Now it's 2015, and Ramesh Ponnuru is telling us Trump is just a prolonged rumble brought on by nothing.

“Take away the celebrity-besotted, the non-voters, and the single-issue opponents of immigration, and you’re left with a group of conservatives who deeply dislike what they see as a spineless Republican establishment,” Ponnuru says. But why take out the anti-immigrant voters? Seems like they're motivated. As to non-voters, Trump may get enough of them to vote; that's what Obama did in 2008. But back to anti-establishment conservatives. Ponnuru: “These voters never determine the nominee, because too many of them waste their passion on hopeless candidates, such as Ben Carson, Michele Bachmann... Donald Trump.” I would say those three names are a case of “which of these is not like the others.” Yes, all three are protest candidates, but only two are hopeless.

Ponnuru will have to trust the rest of us on this. Trump is not a boob (Bachmann) or an off-world stumblebum (Carson). He isn't just floating at the top of the polls during the summer lull. For one thing, he's ripping hide off of Jeb Bush and has made Scott Walker into a comedy act (I know! A wall with Canada). For another, he tore away a good part of Fox's audience during the flap over those debate questions. The Bush family and Fox are pillars of the Republican Party. Trump has been knocking chunks out of both, and he's unharmed. This makes the Republican Party look smaller and more fragile than one might have expected, rather like a Tokyo skyline in a movie with big black-and-white lizards.

Ramesh Ponnuru hasn't noticed. He figures things will be fine if you assume that anti-immigrant voters don't vote and that a self-made billionaire with 40 years' media experience is as dumb as Herman Cain. After the sack of Rome, somebody wrote an essay saying this was nothing, the Gauls had done worse eight centuries before. I guess the establishment always has room for writers like that.