The Awfulness of Ezra Klein, Explained

From one journalist to another. 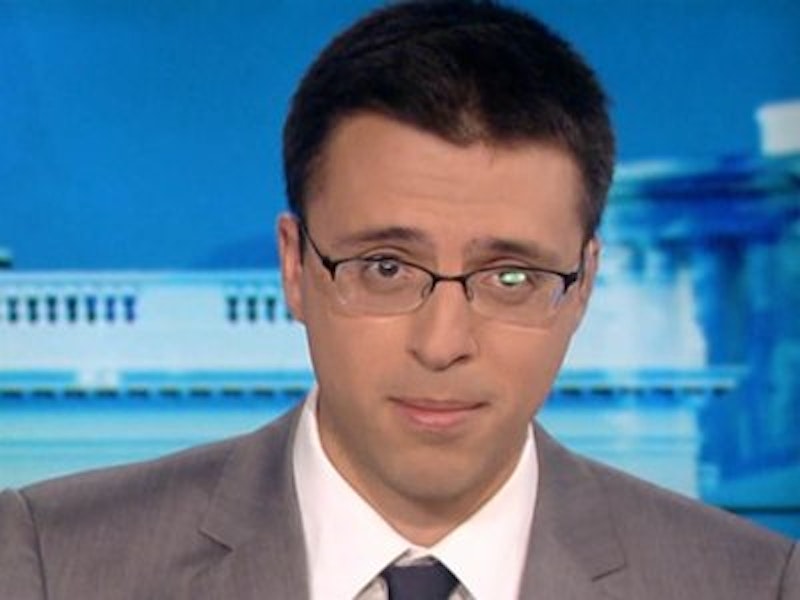 Has Ezra Klein ever been told off by an editor?

My guess is no. That’s too bad, because Klein, the founder and editor of Vox, could’ve been a decent journalist had he just had his ass chewed a few times by a skilled superior.

For those of us in the business, getting humiliated by editors is the way we learned—and learn—our craft. Before blogs could launch careers, we had to endure the red pen of people we interned for at magazines and newspapers. I still remember the first story I published and was paid for, a profile in the Washington City Paper. My first draft was a disaster. At the time my brother, an actor, had just won a Helen Hayes Award for his role in the play How I Got That Story. Jack Shafer, then the editor of City Paper and now media critic for Politico, called me into his office. He presented me with a copy of my piece that he’d covered in red ink. “This is kinda like How I Didn’t Get That Story,” he quipped.

There were other episodes with different editors, but they’ve become infrequent. Still, there are times when I get a brushback from an editor. Either I didn’t get the full story, or I submitted too early, when the copy was dirty and I hadn’t waited a day to proofread. Or the idea is just dumb. Such abuse keeps me awake. It allows me to detect BS and bad reporting pretty quickly.

I don’t think Ezra Klein has ever had such a check. Klein started as a blogger, and after a couple short stops at liberal magazines went to The Washington Post. From the Post he created Vox, a website that endeavors to “explain the news.” He’s treated like a prince by the rest of the media; a 2012 profile in the Columbia Journalism Review opened with this reach-around:

“He’s impossibly young, infuriatingly accomplished, and impressively wonky. In a town full of journalistic flop sweat, he glides instead of glistens, handsome enough to make the ladies turn their heads, and affable enough that their boyfriends compete for his attentions, too. Like ripples around a stone, influential circles appear seemingly wherever he dips his toe. Washington insiders seek his ear, New York magazines compete for his byline, and older journalists puzzle over how he could master journalism’s technological revolution and the northeastern media corridor well shy of his 30th birthday.”

Such an undeserved toast can make a journalist lazy. It’s like giving a child actor drugs. Instead of gliding, an overpraised and under-criticized persons can begins to coast. And Klein is coasting.

A recent piece in Vox is representative. As a favor to the impossible young and wonky Ezra, I’ve decided to be the editor the wunderkind never had. Lord knows Matt Yglesias, Klein’s partner at Vox, isn’t up to the task.

My comments are in bold.

In 2012, the congressional scholars Thomas Mann and Norm Ornstein wrote a column for the Washington Post diagnosing what they saw to be the central problem in modern American politics.

"The GOP has become an insurgent outlier in American politics," they wrote. "It is ideologically extreme; scornful of compromise; unmoved by conventional understanding of facts, evidence and science; and dismissive of the legitimacy of its political opposition.

When one party moves this far from the mainstream, it makes it nearly impossible for the political system to deal constructively with the country’s challenges."

The op-ed hit like a bomb. Mann and Ornstein were institutionalists with wide respect in both parties—Ornstein, in fact, worked (and still works) for the conservative American Enterprise Institute. For them to call out one party as "the core of the problem" in American governance was to violate all the rules of polite Washington society. Their diagnosis was controversial at the time, to put it lightly.

It is obviously correct now.

Ezra—it takes you way too long to get to the point here. Mann and Ornstein are fine, but you can bring them in later to bolster your point. In journalism, particularly an op-ed, if you haven’t gotten to the point by the third paragraph, it’s over. You can be direct: the Republicans have become an extremist party, and their extremism is bad for American democracy. Shrunk and White. Just say it.

This week, it became clear that the Democratic Party will nominate Hillary Clinton—a politician about as mainstream in her beliefs and methods as you will find in American politics. It also became clear that the Republican Party is overwhelmingly likely to nominate Donald Trump—a man who is, by any measure, "ideologically extreme; scornful of compromise; unmoved by conventional understanding of facts, evidence and science; and dismissive of the legitimacy of [his] political opposition."

To put it differently, the Democratic Party, for better or worse, is practicing politics as usual. The Republican Party is embracing what David Brooks calls "antipolitics": leaders with "no political skills or experience" who are "willing to trample the customs and rules that give legitimacy to legislative decision-making if it helps them gain power.”

Ezra—there’s a lot of throat-clearing here. Again, you need to get to the point. You also need to prove your thesis. You’re calling Trump extreme, scornful of compromise, and unmoved by facts. How is he? What are Trump’s specific policies that back this up? Just tossing this out without examples is not tenable. Also: you say the Democrats are “practicing politics as usual.” Could it be argued that there’s something wrong with that? If so, could you give examples?

As of now, Senate Republicans are refusing to give Garland—or any other Supreme Court nominee—so much as a hearing. Their position is, flatly, that they will refuse to confirm any nominee, no matter how qualified or appealing, until the next president is inaugurated.

I’m sorry, but this pivot doesn’t really work for me. If you’re going to use it you’ll have to also admit the Democrats’ history of Borking and blocking would-be judges—in fact some people would ague that the practice started with Joe Biden. You’re claiming the Republicans are an extremist party. You need something that distinguishes them from Democrats.

The Democratic Party is acting like the political parties we have traditionally known in American politics: It is backing familiar politicians with deep institutional ties and, amidst divided government, nominating compromise figures with the potential for bipartisan appeal.

The Republican Party, however, is moving in a different and worrying direction: It is nominating an inexperienced demagogue whose appeal is precisely that he has no institutional ties, and it is refusing to even consider compromise with the sitting president.

In their 2012 column, Ornstein and Mann wrote, "When one party moves this far from the mainstream, it makes it nearly impossible for the political system to deal constructively with the country’s challenges."

Ezra—don’t take this the wrong way, but: you’re young. You’re arguing that the Republicans have moved right. But in the last 50 years the Democrats have also moved left. The party of John F. Kennedy is not the party of Barack Obama (it might be worthwhile to look into Obama’s past associations). Abortion, religious freedom, taxes, foreign policy—you can argue for liberalism on these policies (but again, your piece is short on examples), but you can’t claim that all of them are mainstream (or if you do you have to prove it). The Democrats’ move to the left party explains why they were shellacked by Reagan in 1980 and 1984, the year you were born. Also: citing two other writers and then declaring “Yep” is not an argument.

Bottom line: this needs a revision. Get to the point sooner, prove your points, avoid clichés. Also for what it’s worth, I thought the Gavin McInnes video was too personal.

Also: have Matt Yglesias contact me. There’s a problem with one of his pieces. Thanks.