Donald Trump as an Energy Drink

What gives a liberal hope. 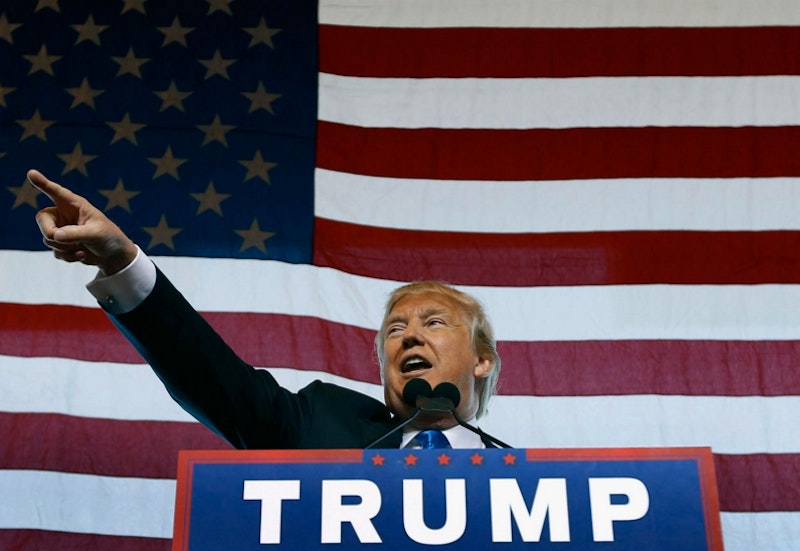 Donald Trump won’t be president. Not even with a terrorist attack, God forbid. The country is too smart. No, not very smart, but smart enough. Most people don’t order crazy energy drinks advertised in the back of Hustler. Most voters won’t vote for Trump. You’d have to be a sucker.

I bet a lot of his fans are in it short-term. They’re buying a thrill. They see their man stretched across the political landscape, and that’s a fun thing to see. He’s lounging at his ease while the senators and pundits cluck and try to make sense of things. The hair-dos and neckties, the important people on TV, now look like stooges and have been reduced to the size of birds. Cable news is currently a show about a big man making everybody jump.

A year ago none of us thought this show would be on the air. I’m betting that a year from now it won’t be, or at most will be in syndication and winding down. The fans will have had their jolt. The power drink will have given its kick. Trump people will have mysterious headaches and want to sit still. Probably a lot of them didn’t get to the polls.

Now just another fatass is on TV, being president, and Trump is tweeting from an island resort about recounts or whatever. It’s March 2017, and Trump fever looks like love for Vanilla Ice: it’s a thing that begins in one month and dies in another, and the months aren’t neighbors exactly but they’re not that far apart. You wonder about getting a job at the place where they make the blades for the wind turbines.

In the epic summer of 2015, when Trump grabbed the polls and started scaring Republicans, some reporters thought his supporters might be fans only, not voters. He put on a show, and the people saying they’d vote for him were really saying they liked the show. As it turns out, no: the supporters did vote. But we’re in a land of new things, and I think we face one here. These supporters may be voters who think like fans. A voter normally sticks with a preferred candidate until the candidate has won the office being sought. But fans have a different orientation. They take their fill of a particular flavor, and then that flavor is done.

My guess is that a lot of Trump supporters will watch their show develop, enjoy it, and then peel off as Election Day comes. A show is one thing, a government is another. By then they’ll have seen Trump’s face many times on the TV, and his power-tool voice will have lived in their ears. AC/DC songs are much more fun than anything else on earth, for the first four minutes. After that they’re no fun. Then you want them to stop. That time is known as October 2016.

DVD corner. There’s a teen movie about the Third Reich. Not a movie about teen-aged people under the Third Reich, but a teen movie and it’s set in the Third Reich. Swing Kids (1993) is dominated by cheekbones and bouncing hair, and the lighting is blond. Not that old-timey, golden blur that Hollywood sometimes lays over period pieces (bad enough), but something flat and uniform that puts everything on view. I suppose there’s no middle ground for a movie about teen issues under the Nazis. If the movie is done decently, it’s going to be very good or better. If the movie isn’t decent, it’s going to give the soul a groin injury. Swing Kids feels like the producers, writers and director all decided to stop thinking until the movie was made and behind them.