On Garland, George Will Right for Wrong Reasons 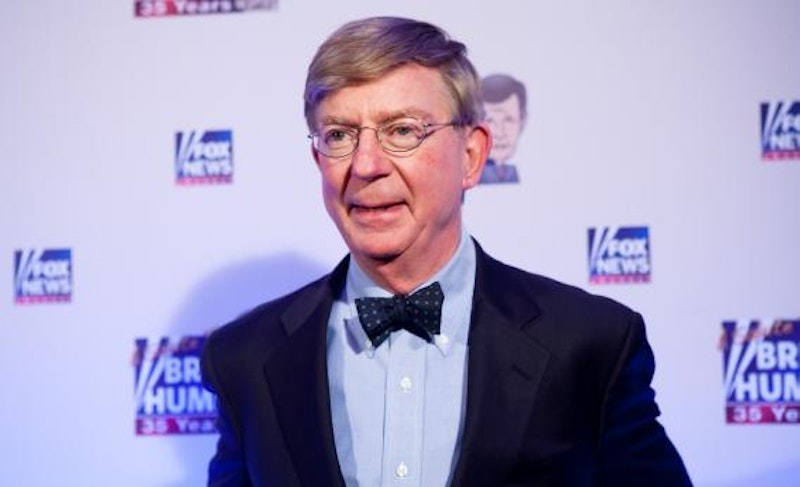 In general, I haven’t much use for the opinions of longtime conservative Washington Post columnist George Will, even if I agree with him on a number of issues. Will is 74, and some would call him, these days, one of the “adults in the room,” as the Republican Party is supposedly on the verge of extinction, to listen to Beltway hysterics. Will, who seems like he’s been around since the Coolidge administration, is off-putting: whether it’s the pretentious epigraphs that an intern digs up to adorn his columns, his condescension of TV news shows, or, not least, his slavish devotion to the Chicago Cubs. We’ll let his closeness to borderline corrupt former MLB Commissioner Bud Selig slip for now.

But on the subject of Merrick Garland, President Obama’s current nominee to replace the late Antonin Scalia on the Supreme Court, Will’s March 18 column made bits of sense. Will blasts “obdurate” Republican senators for refusing, at least so far, to even grant Garland confirmation hearings, writing: “In their tossed salad of situational ethics, the Republicans’ most contradictory and least conservative self-justification is: The Court’s supposedly fragile legitimacy is endangered unless the electorate speaks before a vacancy is filled. The preposterous premise is that the court will be ‘politicized’ unless vacancies are left vacant until a political campaign registers public opinion…” And then Will makes a case for Garland’s confirmation—sketchy from a conservative point of view, especially since Obama is not dumb on such matters.

Yet I agree that Garland ought to be accorded a full hearing, debate back and forth, just as any SCOTUS nominee would receive. I don’t buy this election-year nonsense—The National Review, in its own meltdown, calls for a boycott of Garland, on the hopes that a President Ted Cruz would make a more suitable choice—for a couple of reasons. One, it’s not Obama’s fault that Scalia died during a presidential campaign cycle: as such, it’d be a dereliction of his duty if he didn’t nominate someone to fill the vacancy. Second, even though the vast majority of Americans would be hard-pressed to name even two of the current eight Justices, the GOP’s strategy is reckless, handing Hillary Clinton a campaign issue that she can exploit through mass advertising. There’s no need to confirm Garland—unless he passes muster with the GOP—but to deny him even a hearing furthers the charge of the Party’s “obstructionism,” as if we need to hear that complaint again.

I’m not sure who Will is plumping for the GOP presidential nominee—I assume Cruz, though he’s not mentioned in the column—but his main rationale for hearings, and confirmation, is based on his fear of whom, should he be elected, Donald Trump would nominate instead. Will calls Trump a “stupendously uninformed dilettante” who would of course bollix up a SCOTUS nomination. Maybe Trump would tap the butler at one of his residences, or maybe it’d be a man or woman of enormous substance. Will has no idea: he simply dislikes Trump, which is a bad reason to confirm Garland.

On another note, I must take issue with my friend Noah Berlatsky’s recent column in The Week, in which he promotes the idea that voting—such as in Australia—ought to be legally required in the United States. Berlatsky, a committed liberal, has his own reasons to embrace such a violation of civil liberties—mostly because candidates of his liking, Democrats, would ostensibly benefit from such legislation. He doesn’t venture a specific penalty—Australia’s fine for not voting is $20, and Berlatsky certainly isn’t suggesting anything much more onerous than that—but if this did become law, who knows how stringent it might become?

He writes: “The voters who are least well served by the system—such as the poor or African-Americans or Hispanics—feel that their votes don’t matter, and therefore are less inclined to vote. This is not necessarily because they aren’t paying attention. It’s often because they are paying attention, and recognize that the political system does not care about them. But by not voting, they ensure that the system if even less responsive. This in turn alienates them further—and so on.”

Hooray, more government regulation! I’ve no idea if Berlatsky, who is white, has surveyed the communities of the “poor,” “African-American” or “Hispanic,” but I doubt it. His call for compulsory voting isn’t malicious, but it is a rather bald attempt to ramp up the vote for candidates he favors. Voting is a privilege given to U.S. citizens: that doesn’t mean one has to take advantage of it. At the age of 21, for example, I didn’t vote for either Jerry Ford or Jimmy Carter in the ’76 election. I was informed, but didn’t care for either candidate. Had Berlatsky’s plan been in place at that time, when I didn’t have two nickels to rub together, I might’ve gone to the polls to avoid paying a penalty. That’s democracy? Likewise, this year, it’s quite conceivable I won’t vote again—you could offer me $2,000 to vote for Hillary Clinton, and I’d say, fuck off, Jackson!—given the miserable choices, and would mightily resent the government telling me I must betray my beliefs. Additionally, if voting was mandatory, can you imagine the new avenue of corruption that would erupt in the very neighborhoods Berlatsky, in his goo-goo liberal mindset, is aiming to help? Let a thousand Boss Tweeds bloom!